All in the Family ... Poinsettias and Their “Cousins”

Christmas is a time for bringing families together under one roof, and that's just what we've done here at Longwood Gardens... with plant families, that is!  I invite you to get to know the familiar poinsettia a little better while appreciating their cousins as well. 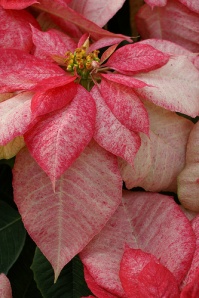 Poinsettias belong to the Euphorbiaceae family, which consists of almost 2,000 species commonly called "spurge." This is the sixth largest genus of flowering plants, with many varieties coming from tropical and subtropical regions of the world. The family is named after Euphorbius, who was a first century Greek physician. He used the milky sap (latex) for medicinal purposes. The flowers on euphorbias, specifically poinsettias, are very interesting. They consist of a single female flower surrounded by numerous male flowers. The showy red portion is made up of bracts (modified leaves).

Euphorbia pulcherrima is a native of Mexico, and in the wild the plant can reach heights of 15'! The plant was named after the US ambassador of Mexico, Joel Poinsett, in 1825. He brought plants back to his home state of South Carolina, and also shared cuttings with botanists like Philadelphia's John Bartram. The first recorded commercial production of poinsettias in America (as cut-flowers) was in 1909 in the Los Angeles basin. The Paul Ecke poinsettia ranch is most well-known for their culture and development of poinsettias, which are the #1 floral crop in the world. By 1923, poinsettia cultivars were developed and recognized in places as far as Jersey City, NJ and St. Louis, MO. 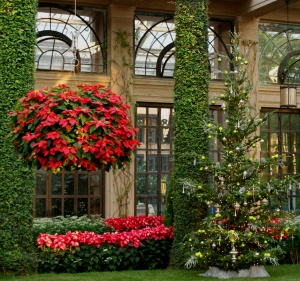 America quickly adopted this brightly colored plant as our Christmas staple, but that love of the poinsettia didn't reach Europe until the 1960's. Exciting and unique varieties with curly bracts that we call 'Winter Rose' were recognized as early as 1950, though their popularity has only increased in recent years. The extra large baskets of poinsettias on display over the lawns in the historic Orangery are made up of the cultivar 'Annette Hegg Red', which was developed and released by Paul Ecke in 1964. Many new breeders of poinsettias are emerging all over the world and they bring even more diversity to this ever-popular Christmas crop at Longwood Gardens. 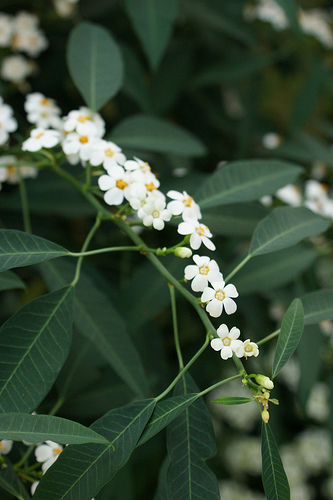 Euphorbia fulgens is commonly called scarlet plume. I always encourage people to use common names as entertainment only, because when you look at the plants in the display, you will probably wonder, where is the "scarlet" or the "plume"? The traditional form of this plant has orange flowers (perhaps that's where "scarlet" arose) and the arching branches on a mature specimen could very well look like a plume. In our Christmas display we show a white-flowered form as well as a cream form. In the past we've grown a yellow flowered form and one with purple foliage! You might see this plant as a cut flower in the florist industry, which is where it's often appreciated with a vase life of 7-10 days.

Euphorbia leucocephala is another popular plant in Longwood's Christmas display. I first saw this plant growing in Mexico while on vacation. I was amazed to see this shrub, standing almost 10' tall, and COVERED with tiny white blossoms! I came back to the States and found the name so we could order a few plants as a trial. The first group bloomed profusely in late 2001 and we've had the plant on display each Christmas since then!

Euphorbia hypericifolia is one of the most popular spurges available for summer containers in your local garden center. This plant traces its roots back to 2005 when it was introduced by Proven Winners as 'Diamond Frost'. 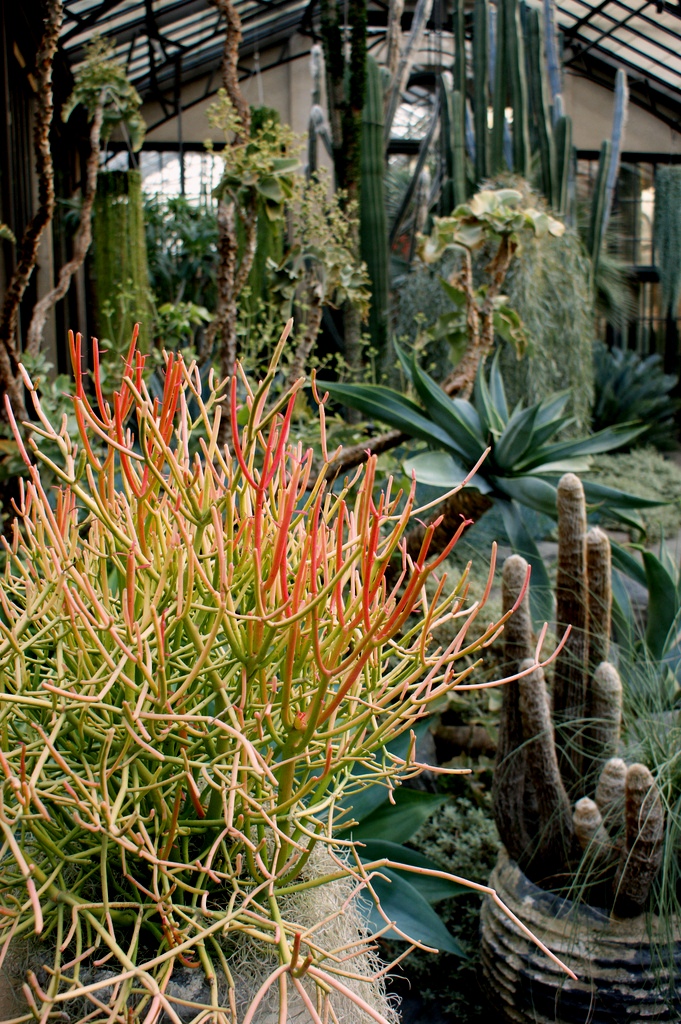 Euphorbia tirucalli 'Sticks on Fire' is sometimes called pencil cactus. It's not a cactus at all, but I think it is one of the most exciting little plants we have in the Conservatory. I fell in love with this plant at the Philadelphia flower show in 2004. I happened to be shopping at the Home Depot and found a tiny little plant in a 2" pot that was severely under-watered and half broken. I purchased this little treasure for less than $1 and brought it to Longwood. We nurtured it for two years before it was big enough to go into the Silver Garden. It has been admired by our visitors ever since!

Euphorbia horrida 'Snowflake' is a cute name, but it looks like a beast! Almost every person that encounters this plant thinks it is a cactus, but upon closer inspection you'll see the tiny little flowers that occur on the spines, and that look like every other member of the family. A mistaken scratch against the plant will reveal the tell-tale milky sap that is characteristic for this family. Beware of any contact with the sap on your skin as it can cause irritation. I hope you've enjoyed getting to know some of the Poinsettia "family" and you'll join us for the Christmas display at Longwood Gardens. It's sure to please every member of your family!