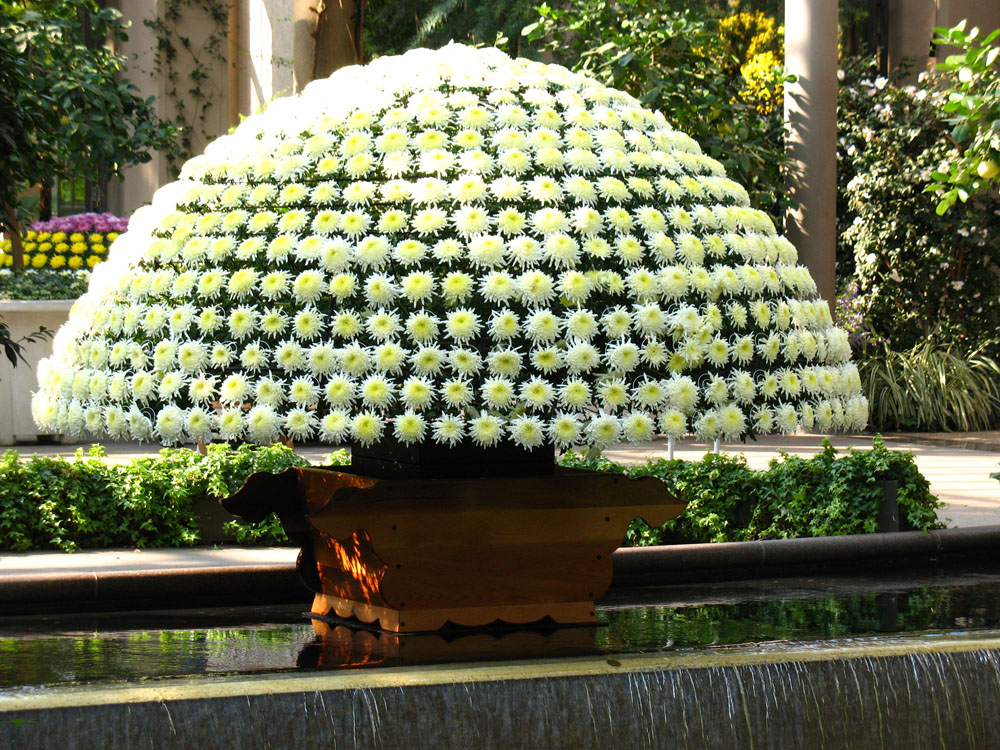 The Thousand Bloom Chrysanthemum (known in Japan as Ozukuri) refers to a technique, originating in China and expanding to Japan several hundred years ago, for growing an extremely large Chrysanthemum, with a goal of producing the maximum number of flowers possible on a single plant. If that doesn’t sound difficult enough, the technique also requires that there is only a single bloom on the end of each individual branch; none of the flowers on the sides of the branch is used.  And to further complicate matters, each flower must be perfectly placed in concentric horizontal rows on a dome-shaped frame! The largest specimen recorded in Japan had over 2,200 flowers—only a few growers in the entire world have been able to produce a plant that large.

First, we choose a suitable cultivar—one that has large flowers, the ability to produce long stems, can grow well under a wide range of temperature and light conditions, and the ability to produce 3-4 branches each time the stem tip is pinched. The mum variety used this year is ‘Kenbu’, a Japanese variety that produces large, white, fully double flowers on long stems. Our grower, Yoko, started the plant from a cutting taken in July 2008, and grew the plant in a greenhouse for about 15 months, enabling it to grow large enough and produce enough stems to be shaped into a Thousand Bloom. During winter months, when days were short, supplemental lighting was provided to prevent the plant from flowering, and to insure the stems grew long enough.  The plant was watered very carefully, fertilized frequently, and the container size was increased multiple times to provide enough space for good root growth.  Temperatures were kept as close to 65-70 degrees Fahrenheit as possible to encourage continual growth. 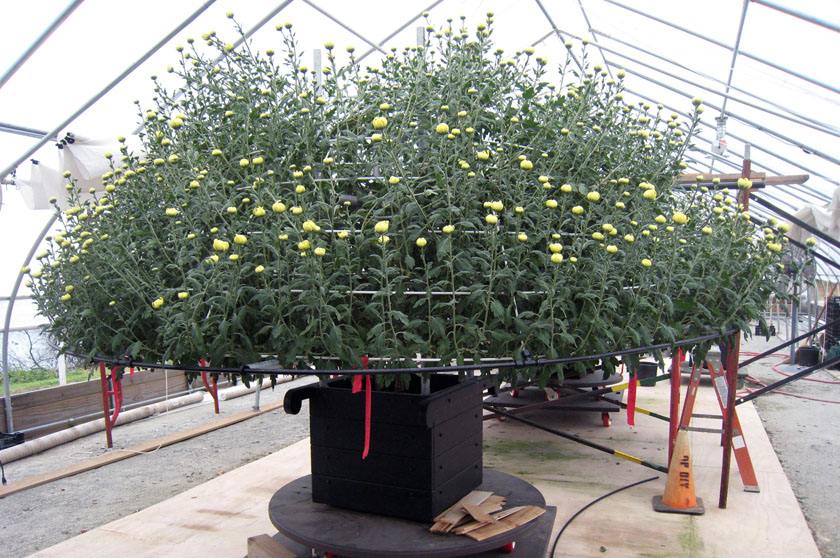 Yoko and her team pinched it (removing the shoot tip) periodically to cause the side branches to grow out. Every time a stem is pinched, 3-5 new branches will form below the pinch. The number of flowers on the finished specimen is dependent on the number of branches, since ultimately only one flower will bloom at the end of each branch. In late September, the shortening day lengths caused the plant to produce flower buds.  When the flower buds are still very small, Yoko and her helpers removed the ones that formed on the sides of each branch, leaving only the bud at the end of each branch. In mid-October, the metal frame was installed by a Dave B., a metal worker from our Maintenance Department.  The ribs and horizontal wires that create the dome shape used to hold the flowers in their proper positions was prefabricated by Dave B and his colleague Dave T.  Special wire circles are attached to each wire post to provide additional support for the flowers.  The overall frame size is determined by how long the branches are (the tips of each branch must be long enough to reach the frame) and how many branches there are.  It takes several days to install the frame.  The frame on this year’s Thousand Bloom is about 9 feet in diameter at the base. 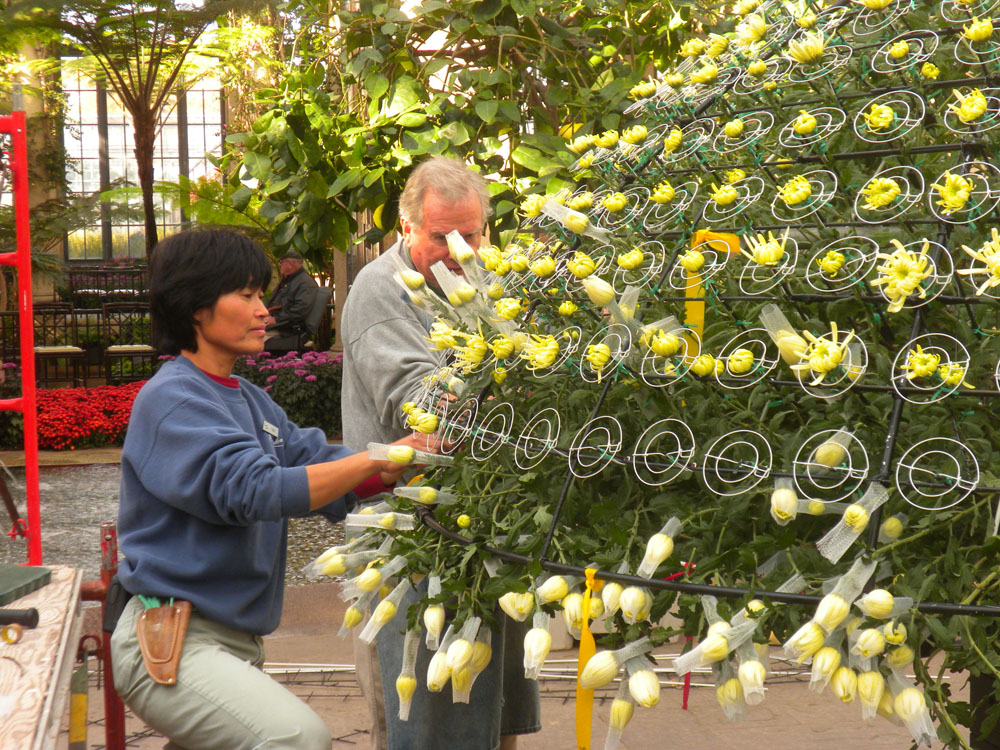 Yoko and a member of her team at work, placing each flower into the dome-shaped frame

Once the frame is in place, Yoko stopped watering the plant, allowing it to wilt slightly. This makes the stems more flexible so they can be moved easily without breaking.  She then brought together a team of four gardeners to place the flowers in their proper positions on the frame.  First, each flower is placed in a soft fabric sleeve to protect it during handling. Then, starting at the top of the frame, the flower buds are attached to the wire supports—resulting in perfectly spaced concentric rings of flowers. Once the flower buds are in place, the sleeves are removed so the flowers can fully open. When the flower arranging was done, the Thousand Bloom was placed in its final location in the East Conservatory to be enjoyed by Longwood’s guests. This year, Longwood has grown its largest Thousand Bloom ever—and one of the largest ever grown in the United States—featuring 718 perfect blooms and measuring more than 8 ft in diameter! This magnificent chrysanthemum is on display now through November 22. Longwood would like to thank Japanese Master Growers Mr. Katsuo Ito, Mr. Minori Yusa & Mr. Tadashi Imafuku for sharing their knowledge and skills with us and helping us to produce our classic mum forms.