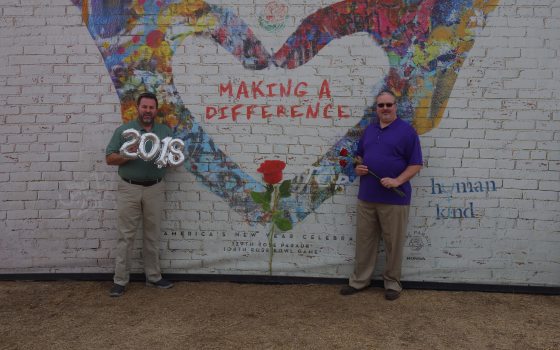 The Rose Parade has been called America’s New Year Celebration and for millions around the globe it is the tradition that begins the New Year. The Tournament of Roses began in 1890 as a way for the Valley Hunt Club to promote the charm and beautiful weather of Pasadena, CA, and by 1895 the parade had grown and the Tournament of Roses Association was formed. As football grew in popularity in the US, the game was added to the festivities, and in 1905 the first Rose Queen was chosen. All of these time-honored traditions continue today.

The mission of the Association is to “bring people together… [and] enrich the lives of the many people and organizations it touches by providing satisfying, meaningful and rewarding experiences.” I recently had the privilege of being one of the many people whose lives are enriched by the Tournament of Roses as I was selected to be one of three judges for the 2018 Rose Parade.

The process for me began more than a year ago when I was judging at the Philadelphia Flower Show. I have been the lead judge of the large floral exhibits for several years, and each year I meet two new judges from various places around the country. In early 2017, I met one of the outgoing executives from the Tournament of Roses. I told him that judging the Rose Parade was on my bucket list. He suggested that I send my resume to the committee, and after careful evaluation, my name was added to a potential judges list. I was notified later that year that I had been selected— along with two other judges—from more than 100 applications.

The Association responsible for the entire event is a committed group made up of 935 active volunteer members who contribute more than 80,000 hours annually serving on one of 31 operating committees. As a judge, I was continually impressed with this amazing group of people, who handled every aspect of our experience with unparalleled hospitality and professionalism.

The judges met in Pasadena on December 28 to begin orientation for our role in this monumental event. We were then driven to several locations on Saturday, December 30 for our first look at the floats in various stages of construction. This was our first judging of these stunning creations that would be finished with most crews working through the night. On Sunday we returned to see these masterpieces in all their glory and perform our final round of judging. I have watched this parade since I was a child. As a Philadelphia-region native, I know I am supposed to be a Mummers fan, but with my love of plants and flowers, and my mother working at Longwood, my family always watched the Rose Parade. TV coverage captures a lot, but seeing the parade in person, breathing in the scents of the flowers and touching them (a privilege reserved for the judges), was a completely transforming experience.

We judged based on three categories: Floral Presentation, Float Design, and Entertainment Value. We granted 24 awards spread out across the 38 floats, but the total experience was so much richer than just the judging process. We met the makers of the floats, the riders on the floats, and heard many of the stories behind the floats. It was in the presence of all of this beauty and activity that the passion, dedication, and sense of community that makes this event so special became so clear.

I understand that this is more than just a parade. It is hard to put into words all of the unexpected emotion that welled up as we traveled from float to float and met proud people and felt their stories come alive in these elaborate floral presentations. Some of the stories made us smile and many left us with tears in our eyes as we began to comprehend our place in this revered American pageant.

I felt the pressure and fully understood the responsibility of judging the floats. We were determining awards for countless hours of creativity, dedication, and hard work on the part of the volunteers and float creators. This parade is viewed by more than 45 million nationally and 28 million internationally, not including the more than 700,000 fans who camp out overnight to see it live. Our decisions mattered. We were a strong little group. Each judge brought their own expertise to the table, and the discussions were lively with all voices given equal worth. In the end we were pleased when we produced a unanimous awards list.

The quantity and variety of materials used on the floats is unmatched. Every surface must be covered in either floral material or non-floral natural material. This allows for the use of spices, seaweed, cotton, and grasses in addition to the massive amount of flowers, and these additional materials really help the shapes and forms come to life. Working with floral material is very labor-intensive as every rose, orchid spray, and any cut flower that would not last at least a day without water must be in a water tube. A great deal of thought and planning goes into the material choices, as the designers consider how to portray water, fabric, fur, and fish scales, among many other subjects depicted on the floats. Float creators also rely on past experiences when designing floats as a reference for successes and challenges. It was quite inspiring to see the details up close and also understand the large scale on which they are executed to such high standards.

The 2018 theme was “Making a Difference” and the entire event did that and more. Every aspect of this parade from the volunteers, the bands, all of the parade participants and, of course, the floats made this a festival of flowers, music, and sports unequaled anywhere in the world. I understand why it is called America’s New Year Celebration, and I was honored to be a small part of the magic.