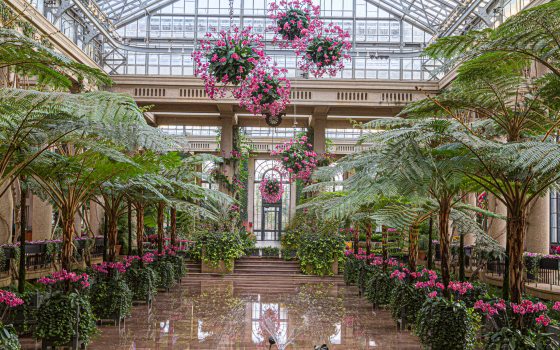 They say those who can’t do, teach. After working alongside our extremely talented—and exceptionally patient—horticulturists to help create an orchid orb for our Orchid Extravaganza display, I can say with absolute certainty and gratitude that Longwood is an exception to that rule. Being part of the Marketing team at Longwood means I typically spend my days working on a keyboard … and not with hundreds and hundreds of gorgeous Phalaenopsis Taida Momoko, waiting to be arranged in a spherical shape and magically suspended in our Conservatory.  I consider myself lucky to be able to witness, let alone write about and share, the magic that happens in our Gardens every day. Taking the opportunity, however, to experience firsthand (and hands-on) how that magic happens, and to see all the precise steps involved in the process of creating an orchid orb, is something I will never forget.

At the encouragement of our Associate Director of Display Design Jim Sutton, Longwood’s Director of Communications Trish Evans and I joined a production team of 13 horticulturists and volunteers, led by Grower Assistants Joanne Joyce and Bettina Haydn-Summerfield, to help craft the six orchid orb baskets now suspended above the Fern Floor.

Joined by the five orchid orbs that hang over the Center Walk adjacent to the Fern Floor, our Main Conservatory is now a vision of a mauve Phalaenopsis canopy floating from above … those 11 baskets contribute to the more than 70 total baskets of different varieties of plants gracing our Conservatory during Orchid Extravaganza. The process for creating that canopy, I learned, is just as admirable as the finished product. The production team’s willingness and readiness to teach us the orchid orb process was something to be admired as well.

Each of the 11 orchid orbs in our Conservatory is made up of 80 Phalaenopsis … do that math and you’ll find you have a lot of orchids to work with, let alone keep in beautifully pristine shape as you, well, shape them into orbs.

Each orb is created on a custom metal form, built in-house by our extremely talented—and exceptionally patient—Facilities team. It’s in these forms that our horticulturists layer wet sphagnum moss and orchids in rows, starting from the bottom of the basket forms.

Before the Phalaenopsis meet their new metal form home, each must be unpotted from its original container and prepped to fit within the metal form’s tight spaces. We first removed excess packing moss from each orchid’s roots before wrapping a six-inch netted onion bag around the roots and remaining moss to hold each root ball intact and enable each plant to be squeezed through the metal basket frames.

When I say squeezed through the metal basket frames, I mean squeeeeeeezed. We followed a precise blueprint of how many orchids needed to be inserted into each row of the frame … and for each orb to ultimately look lush and full, those orchids needed to be squeeeeeeeezed into the frames. My fingertips definitely felt that squeeze for a few days following production.

We unpotted, prepped, and squeezed for a total of eight layers for each orb form, along the way augmenting the frame with additional sphagnum moss. We placed the bottom layers of orchids upside down, so they could constitute the bottom rounded portion of the globular shape … it’s that layer of orchids that would ultimately cascade down at the bottom of the orb.

By the time we had inserted and placed the 80 Phalaenopsis into the form, I was pleased with the result … but little did I know we were far from done. I shouldn’t have been surprised, though, as that’s the Longwood way … improving and fine-tuning upon something that already looks amazing to catapult it to next-level amazingness.

Next up was removing each orchid’s original brown metal stake and replacing it with a new green bamboo stake. Why? So the stakes would be less visible … thereby adding to the perception of orchids floating mid-air in their finished orb forms.

And when I say we restaked the orchids, we RESTAKED the orchids. It’s not easy inserting 80 stakes into an already dense form consisting of metal; 80 Phalaenopsis root balls, stems, and leaves; moss; and packing peanuts while keeping those 80 Phalaenopsis intact and beautiful.

We also arranged the leaves in a just-so way to cover the nucleus of the orb shape. Much more than just my fingertips felt that restaking step for more than a few days following production.

Once each orchid was restaked and each orchid artfully angled, the six Fern Floor orbs were considered finished. We attached them to the space’s winch system, slowly and thoughtfully nurturing them skyward. While most of the production team was looking up, watching the orbs get higher and higher in the air, my gaze stayed directly ahead, observing the pride, the excitement on everyone’s faces as they watched the orbs making their ascent. It’s not many places where pride in not one’s work, but rather the team’s work, is so palpable. And it’s not many places where that pride, a sense of camaraderie, and an all-around sense of together-we-are-going-to-make-the-seemingly-impossible-happen resides not just in the finished product, but in every plan, every step, every detail that precedes it.

I consider myself lucky to experience, firsthand and hands-on, that it’s that sense of pride … that determination to make the beautiful even more beautiful … that collaborative spirit on which we thrive … is the magic of Longwood. And at the risk of sounding lofty, the gratitude I feel for being part of it soars, well, higher than a lovingly crafted orchid orb.