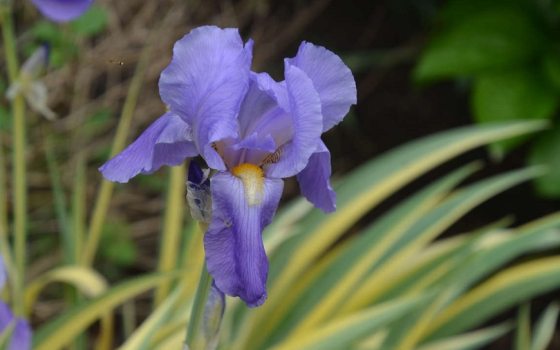 The Mystery of Longwood’s Iris Garden

Our founder Pierre S. du Pont shared his love of horticulture and gardening with his wife, Alice (Belin) du Pont. Like many avid gardeners, Alice had her favorites: orchids, roses, peonies, lilacs, and irises. We know the du Ponts built an entire greenhouse devoted to orchids and laid out two rose gardens. But few people know that Mrs. du Pont had an iris garden. Very little trace of this iris garden survives today (we don’t even know where it was located!), and only by delving deep into the archives are we able to piece together the story of this long-vanished garden.

Today at Longwood, we grow irises in small numbers throughout the gardens, from Siberian iris (Iris sibirica) in our Idea Garden to wild iris (Iris versicolor) in Peirce’s Woods and the Meadow Garden. While irises may play an important role in creating a harmonious effect in the garden, they are rarely the singular star of the show in our displays today. There was a time, however, when thousands of iris plants bloomed in our gardens. Irises first appeared at Longwood along the Flower Garden Walk. Plant orders from 1908 show that Mr. du Pont obtained nearly 900 English (Iris latifolia), Spanish (Iris xiphium), and Japanese (Iris ensata) irises in shades of blue and yellow. Planted in mixed borders along with poppies, foxglove, lilies, and phlox, irises were simply a component of the overall garden picture. When Pierre du Pont married Alice in October 1915, irises began to play a more prominent role at Longwood. In the fall of 1915, Mr. du Pont ordered more than 2,000 irises to be planted in the Terrace Garden for cut flowers. Mrs. du Pont began planning her iris garden several years later.

In fall 1922, Mrs. du Pont wrote to Mrs. Frances E. Cleveland of Sunnybrook Iris Garden in Eatontown, New Jersey requesting help planning the garden. The garden would be 150 feet by 50 feet, divided into smaller beds for planting. Mrs. Cleveland suggested using the “finer and newer kinds [of iris] as accentuations ... edged with the early dwarfs and sprinkled with the lovely Spanish iris.” Sunnybrook Iris Garden supplied many of the irises for the initial planting, sending 653 irises, including single specimens of rare tall bearded cultivars, such as ‘Brandywine’, ‘Cecil Minturn’, and ‘Lent A. Williamson’.  New iris varieties were in great demand by collectors, with the most exceptional fetching high prices. Mrs. du Pont paid as much as $20 for a single iris plant, the equivalent of about $300 today.

Mrs. du Pont’s iris garden bloomed for the first time in 1923. She must have been pleased with the result, because in the fall of that year, she ordered an additional 568 iris plants. Over the next decade, Mrs. du Pont would order nearly 4,000 irises, obtaining plants from such notable irisarians as Bertrand H. Farr of Wyomissing, Pennsylvania and Grace Sturtevant of Wellesley, Massachusetts. In 1928, Mrs. du Pont joined the recently-formed American Iris Society. Founded in 1920, the American Iris Society counted among its members many of Mrs. du Pont’s friends and relatives, including H.F. du Pont of Winterthur, Mrs. Irénée du Pont of Granogue, and Mrs. William K. du Pont of Wilmington. Mrs. du Pont no doubt visited their gardens and was inspired by the varieties she saw. She wrote Sunnybrook Iris Garden in 1926, “Kindly enter my order for the following Japanese Iris, to be shipped to me at Mendenhall, Pennsylvania ... I saw the Iris you sent to Mrs. William K. du Pont, and decided on the ones I wanted to order.”

In 1937, the American Iris Society held its annual meeting in Wilmington, Delaware. Mrs. du Pont hosted the exhibition of irises at Longwood, where more than 100 iris blooms were displayed in glass bottles on the Exhibition Hall floor on long silver-painted tables. Mrs. du Pont’s Iris plicata ‘Los Angeles’ placed first in its class, beating out blooms from H.F. du Pont and Mrs. Donald Ross.  Her gardener, William Mullis, is credited with growing the specimen.

Mrs. du Pont passed away in 1944. From there, little is known about the fate of her iris garden. Longwood became a public garden 10 years later in 1954, and that same year, we began keeping a record of all plants alive in the gardens. More than 100 named cultivars of iris are listed as growing in the gardens in 1954, including several that we know were grown by Mrs. du Pont such as Iris I. ‘Realm’, I. ‘Picador’, and I. ‘Juniata’.  Then, in 1959, reports show that eight iris beds were removed from somewhere in the gardens. Were these eight beds Mrs. du Pont’s original iris garden? It is very possible, but we may never know for certain. What is certain, however, is that Mr. and Mrs. du Pont’s shared love of gardens and horticulture lives on here at Longwood, continuing to inspire gardeners, plant lovers, and all those seeking beauty in the world around us.