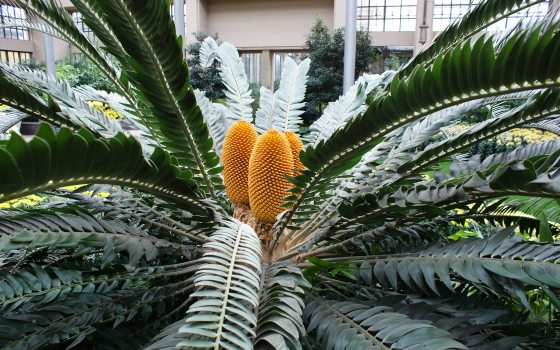 The King of Our Conservatory

Amid all of these beautiful and unusual plants, there is one that stands out among all others: Encephalartos woodii, our King of the Conservatory!

The Encephalartos woodii, commonly referred to as Wood’s Cycad, is special to us because this plant is extinct in nature. In 1895, one specimen was found growing in its native habitat of South Africa by an explorer named J. Medley Wood. When Wood realized how rare the plant was, he returned to the site to collect two main stems of the cycad and a few pups (smaller plants that grow off the base of the mother plant). They were taken to Durban Botanical Garden to preserve this rare species. All subsequent attempts to preserve the Encephalartos were unsuccessful, and by the early 1900’s, Encephalartos woodii was believed to be extinct in nature and surviving only in gardens and private collections.

The gardeners of Durban Botanic Garden had the huge responsibility of keeping the main stems and pups of the original Encephalartos alive and viable since these were the only plants left in the world (imagine having that responsibility!). As more pups formed off of the original plants, they were removed and rooted to keep the genetic line alive. In the 1960’s, one of Longwood’s former directors, Dr. Russell Seibert, went on a plant exploration voyage to South Africa and convinced the gardeners of Durban to send one of the Encephalartos pups to Longwood Gardens. In 1969, Longwood was ecstatic to receive a rooted Encephalartos pup. It was taken to our Research Department where the gardeners carefully nurtured the plant until it was ready to be displayed in the Conservatory.

Currently you can find our beautiful Encephalartos woodii vigorously growing in the East Conservatory. In early winter our specimen is especially eye-catching because it has orange cones protruding from the center of the plant. These cones are the plant’s method of reproduction. Each cone is made of scales called sporophylls that release pollen. There’s one problem with this method of reproduction however, as a female plant is needed to receive the pollen and produce seeds. All cycads, including Encephalartos woodii, are dioecious, which means that each plant is either male or female. Since only one Encephalartos plant was found in nature and it was male, there is no way to sexually propagate this cycad. All Encephalartos plants that now exist around the world are also male, and the only way to propagate them is by rooting the pups. These pups, which are genetic clones of the original plant, are removed from the base of the cycad and rooted. Even so, our Encephalartos has saved up all of its energy over an entire year to create cones for pollination. Every day when I come to work and walk by our Encephalartos woodii, I think how lucky I am to be given the responsibility of taking care of such an incredible plant. He has quite a history, and it’s one that should be shared with all!