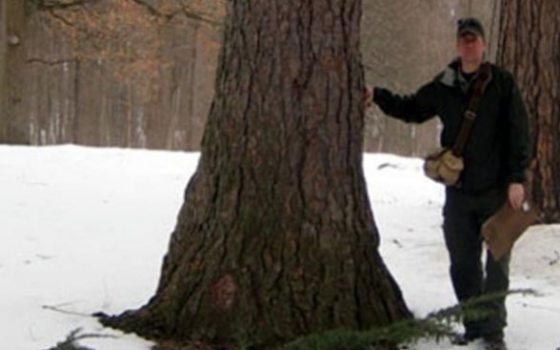 A Tale of Tall Trees

What is a champion tree? For over seventy years the Pennsylvania Forestry Association has located and inventoried the largest specimen of each species that grows in Pennsylvania. To be a champion, a tree must be larger than all of the other reported trees of the same species. To calculate which is the largest, three measurements are taken from the tree: the height, the girth (circumference) at 4.5’ above the ground, and the largest spread.  Using a points formula that assigns one point for every foot of height, one point for every inch of girth, and a quarter point for every foot of spread, the Association assigns a score. The score can be used to compare trees of the same species to see which is the largest.

In 1989 a man named Rick Koval submitted a few additional trees from Longwood to be champion trees. In 2006 I came to re-measure the existing champions, and I identified a few more that were worthy of champion status, with the help of Longwood’s Volunteer Coordinator Dave Thompson. However, we had still only identified a fraction of the eligible trees in the Gardens.

It wasn’t until 2009, when I became an employee of Longwood Gardens, that we were able to put the issue to rest — how many champion trees are at Longwood? Painstakingly, and with the help of several volunteers, every tree in the public areas of Longwood was measured and photographed. The process took just over one year to complete. The outcome yielded 62 total state champion trees, 28 trees in second place and 23 trees in third. A total of 164 trees made the list. Longwood can now proclaim to have the most champion trees in any one location in Pennsylvania!

The second portion of the effort is now underway, as we measure the trees in the perimeter areas of Longwood. Who knows what we will find on the lands outside of the core gardens? There may be even more champions lurking out there. Intrigued? We are always looking for additional volunteers with a love of trees!

Look for the new issue of Big Trees of Pennsylvania coming in 2011 in Longwood’s Garden Shop. You can stay current with the champion trees, or nominate a tree you know at www.pabigtrees.com.