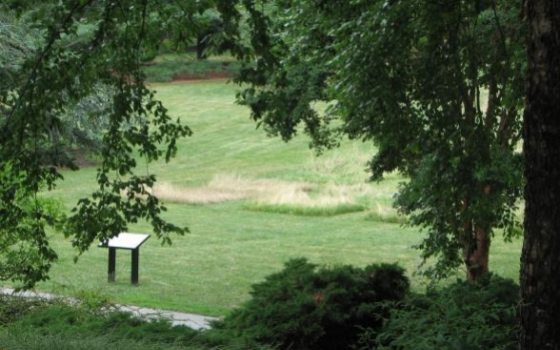 Longwood Gardens is partnering with The Pennsylvania State University for a 5 year study to find a grass species that will look excellent with minimum mowing and care. We are growing grasses on 12 marked turf plots, each featuring different species selected for their low-maintenance yet excellent aesthetic qualities.

We are looking at factors such as the rate of establishment; stand density, weed density, and aesthetic characteristics (color, seedhead density, texture, growth habit) of each of these grasses: 6 cool-season and 4 warm-season. Cool-season grass species were established in September 2009, and warm-season grasses are being established now, during the summer of 2010. The species are: Canada wildrye, chewings fescue, autumn bentgrass, hard fescue, turf type tall fescue, strong creeping red fescue, Kentucky bluegrass, perennial ryegrass, little bluestem and blue grama.

They are being studied and monitored under different mowing conditions. The three mowing treatments are: un-mowed, one mowing per year (spring); and two-three mowings per year (spring, summer, fall). A single mowing height (approximately 4-5 inches) using a rotary mower with a 60-inch deck will be used throughout the entire study.The experiment is being conducted on a silt loam soil amended with a 1-inch layer of compost produced at Longwood Gardens.  The cool season site (145 x 50 ft) was treated with glyphosate herbicide in the fall of 2009 prior to establishment. The warm season site (55 X 55 ft) was treated in June 2010.  Following the death of existing vegetation, approximately one inch of compost was applied on the soil surface, tilled to a three-inch depth, and leveled.

Stop by the "Frog Hollow" area, to the West of the Chimes Tower to view the turf grass trial.  Although simple in scope, this 5-year study could have a dramatic eco-friendly outcome for Longwood Gardens. Currently, staff mow the turf areas about once a week during the growing season—and there are a lot of turf areas throughout Longwood Gardens! If this study proves fruitful, then Longwood could replace some of its turf with a grass from this study and drastically reduce mowing in portions of the garden. This will greatly reduce fuel consumption and mower vehicle emissions.