In conjunction with Longwood’s exhibit this year, Notes from the Forest (open through October 16, 2011), we were given the exciting and challenging task of creating 4 distinctly different garden spaces that incorporated the theme of sound.

Historically, the students in Longwood's Professional Gardener Program were given plots to design and maintain at their residences, so that they could be responsible for every aspect of garden design--from concept to implementation. But since last summer, the students have been creating new, unique gardens, named the Student Exhibition Gardens, for Longwood's visitors to enjoy.

In conjunction with Longwood’s exhibit this year, Notes from the Forest (open through October 16, 2011), we were given the exciting and challenging task of creating 4 distinctly different garden spaces that incorporated the theme of sound. Our creative process began to take shape last summer under the direction of instructor, landscape designer, and former Professional Gardener student, Dan Maffei. We were given the tools to begin the process. As with any new design concept, we met with our client, which in this case was Longwood Gardens. This valuable opportunity allowed the client to express their vision for this unique display at Longwood. After presenting and receiving valuable feedback from Longwood staff, we met with the Longwood Board of Trustees, and after a thrilling response, we were ready to move forward. In the winter of 2011, again under the supervision of Dan Maffei, our class created a budget for plant and hardscape materials and a timeline for the project. During our Landscape Design and Construction class we learned basic construction skills, as well as a framework for combining basic elements in the garden design.  After many months of working and re-working our ideas in the classroom, we broke ground in April. With help from the junior class of Professional Gardener students we opened to the public on May 15! Our four distinct gardens have flourished throughout the summer! Below, each group of designers (in their own words) describes their concepts, showcasing the presence, or in some instances the absence of sound.

The inspiration for our garden, Conduit of Color, developed from our intention to interpret how the human ear hears sound. When picturing the human ear, you can see how our pathways flow like the ear’s canal. At the center of our garden you find a mahogany deck that represents the eardrum.  We chose "loud colors concentrated in mass plantings that radiate like sound waves toward the center of the garden.  The colors are boldest at the “ear drum” and emanate outwards so that they are perceivable even from a distance!

The cone-shaped arbors at either end are adorned with the Passionflower vine, and are reminiscent of a phonograph horn.  Depending upon the interpreter’s gaze, these arbors may appear as either sound projectors or sound collectors.  As you stop at the wine barrel planter in the center, you are invited to gently engage a secret chime that hides underneath the deck. This feature reminds the individual to take notice of all the surrounding sounds, both the obvious as well as the subtle. One of our favorite parts of the garden is the quiet seating area set back against the shady hedge. You can find solace here from the hot sun and refresh with the scent of pineapple sage that surrounds you.  While sitting, enjoy the assortment of cool, calm succulents that adorn the wine barrel planters set beside you.

When Emily Mox and I (Tim Snyder) began working together on this project, we both knew right away that we wanted to create a garden that had an element of mystery or surprise to it.  We also wanted the garden to represent sound not only in a visual way, but also in an interactive way that would appeal to all ages. After searching the Internet for ideas, we came across a PVC instrument (played with hands or paddles) created by a man named Dennis Havlena, who gave instructions on how to build it.  We then adapted the instrument, integrating it into the center of the garden and surrounding it with a series of curved walls that represent sound waves resonating outward.  The placement of the pipes and the curve of the walls help to create a surround sound effect as you play them.

The louder, brighter plant palette represents sound escaping out from the room and spilling down the paths, while the black ornamental peppers and leatherleaf sedge represent "sound shadows."  The surrounding plants create contrast for the bright colors and represent "background noise." This garden took a lot of work and extra help, (for which we are grateful) as we built the curved walls and the instrument. We learned a lot in the process and we feel the garden has been very successful so far!

The Frosted Glass Panels Being Installed.

Breaking Point is a garden of contrasts. The design features two spaces divided by a six-foot, segmented wall of frosted glass panels. On the exterior, a quiet palette of blue and purple-flowering plants are massed and organized by obvious bedlines. Walking through this part of the garden is calming and guests sense a distinct change when they pass through the wall and are nearly overwhelmed by a screaming red plant palette, narrowed path, and seemingly chaotic planting design. We all agree that we really enjoyed designing and building the garden, despite the challenges that come along with installing a six-foot wall, but our favorite part has been watching and listening to guests experience the space. Erin explains, “The senses are truly heightened by the contrast, and the red is so much louder after passing through the blue.” In addition, the garden features some unique plants, Talinum ‘Kingswood Gold’ and Brillantaisia subulugurica. 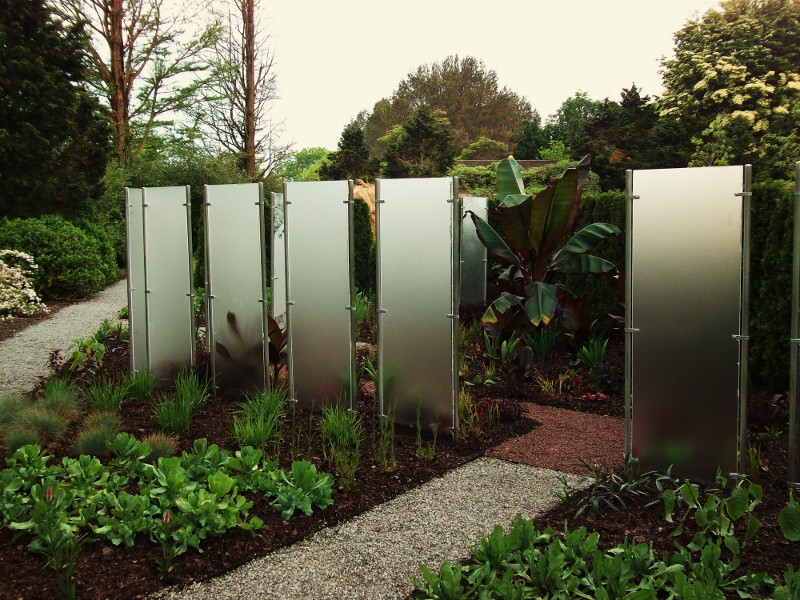 Central to the concept of Sound Unfound was the construction of a hut that serves as a respite from the outside forces and also offers a dreamlike perspective of the garden from the viewing window. Assembling this space from start to finish was an incredibly fun and creative experience for us! We built the hut from natural materials collected on Longwood's property, which we wove onto a frame to create a very organic and curious structure.

The plant material was selected by its color, texture, form and adaptability to the site.  The plants thematically move from the outside of the hut with soft, muted, low-lying tones and begin to pick up in color and height as the eye moves towards the back of the garden.  A visitor to this space would find themselves lost in sort of dreamy plant world full of peace and wonder. We hope that you will be able to come and experience our garden creations during their peak bloom, now throughout September! You may walk away with some sound inspirations of your own.