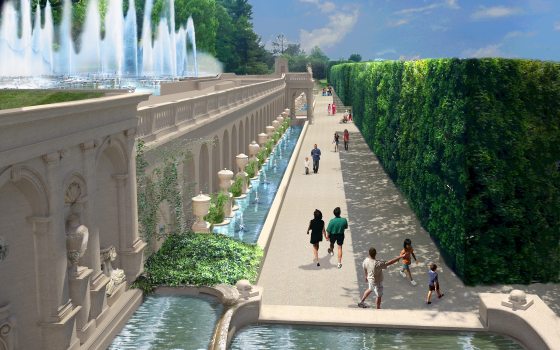 When Pierre S. du Pont began developing the Main Fountain Garden at his private estate in 1929, his overall vision was inspired by numerous trips to Europe and his recollections of the 1893 World Columbian Exposition in Chicago, along with the success of his new Italian Water Garden and Open Air Theatre fountains. He approved everything, but certain elements, such as the hydraulic displays and the fountain illumination, were entrusted to his staff, notably Russell “Phil” Brewer, who headed up Longwood’s Maintenance Department. The grand vision was Pierre’s but he gave full credit to his staff for their collaborative efforts at creating a masterpiece of fountain and garden design.

Mr. du Pont was a singular man with a grand vision and the resources to realize it. Part of his plan, certainly, was that his estate would pass on to new stewards who would carry out his legacy and continue to fulfill his promise to be open for the enjoyment of the public.

Eighty-three years later, Pierre’s hydraulic masterpiece continues to wow guests with its beauty, engineering, and showmanship. Good design stands the test of time; plumbing, however, tends to decay. Most anyone who has visited and viewed the Main Fountain Garden up close has witnessed the crumbling stone work and inoperable fountain jets. Underground, the picture worsens. Technology from the 1920s can’t withstand the 10,000 gallons of water per minute pumped during shows that run 7 months out of the year. These realities led us to the decision to invest in the future of our iconic and beloved Garden. In the spirit of innovation and grand design, we are pleased to launch New Heights: The Fountain Revitalization Project.

This project was taken on with the greatest care, relying on the expertise of the best in their fields, and meticulously shepherded by our Board of Trustees and a team of Longwood staff members and volunteers who researched, discussed, and debated every detail.

The Staff Steering Committee began meeting more than 18 months ago, and started with big-picture discussions about the great gardens of the world and how our Main Fountain Garden fits into that body of work. From there, we considered every possibility for the project and began systematically working through our plans, layer by layer. As we share more about the project in the coming months, my hope is that you will discover the amazing beauty and complexity of each part: heritage, architecture, engineering, landscape design, and fountains.

I’m proud that we have settled on a plan that honors Mr. du Pont’s vision—preserving legacy views, restoring or reconstructing all of the stonework, and retaining original fountain nozzles, all while re-engineering and updating the electric and plumbing infrastructure. We are adding to the Garden new fountains, new features, new seating, and improved accessibility that invites guests to immerse themselves in the space.

Just as Pierre deftly planned for his legacy—a gift to everyone who visits—Longwood’s Board, staff members, volunteers, and myself have brought together every resource to ensure this legacy continues. We are humbled and thrilled by this project. Our excitement is only set to build as we prepare to share the revitalized Main Fountain Garden with you in spring 2017.

New Heights: The Fountain Revitalization Project will begin in mid-October 2014. The Main Fountain Garden will re-open in spring 2017. Find out more and follow along as the project progresses at longwoodgardens.org/newheights.