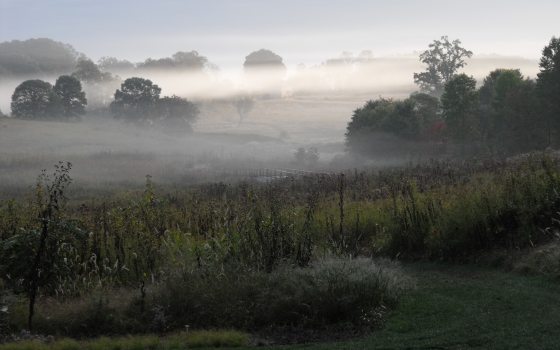 As the new "Meadow Gardener" in the Natural Lands division of Longwood Gardens, it is my job to take care of the Meadow Garden as it grows and develops. It has been very exciting to watch the new Meadow come into its own this summer following such an extensive makeover. When I started at Longwood this past April, much of the Garden was still an active construction zone, with nary a hint of green. But as the season progressed, the browns of last year's stubble quickly gave way to the greens of new growth. Now, in Autumn, the Meadow continues to transform itself. Each week brings with it a new palette of colors and textures, as the Garden's plants and animals prepare themselves for the long winter ahead. From falling leaves to blooming wildflowers, Autumn's Colors are on full display in the Meadow Garden. Here are a few of my favorites:

Hardy, prolific, and impossible to miss, these ubiquitous perennials transform the Meadow Garden into a riotous sea of yellow and gold during late summer and early fall. Comprising over 120 species, goldenrods are easy to recognize but hard to identify. At Longwood, Canada or "late" goldenrod (Solidago canadensis), early goldenrod (Solidago juncea), and giant goldenrod (Solidago gigantea) are among the most abundant species, and constitute an important food source for pollinating bees, wasps, and beetles. Contrary to popular belief, goldenrods are not typically responsible for hay fever, because they are not wind pollinated (unlike ragweed). However, many goldenrod species have rightly earned a reputation as garden weeds, as they are able to spread rapidly by windborne seeds and underground rhizomes.

There is no mistaking the bright, brilliant red of this wetland species in late summer and early fall. A favorite of hummingbirds (with which they likely co-evolved), cardinal-flowers are a vital source of nectar for many late-season pollinators. While this plant is commonly treated as a perennial, individuals may be relatively short lived (7-10 years), and must propagate constantly through seed and offshoots to maintain a stable population. In the Meadow Garden, large numbers of cardinal-flowers can be found in wetland areas by the Meadow Bridge and Hourglass Lake, where they are a welcome sight to visitors and hummingbirds alike from early August to late September.

The archetypal prairie grass, Indian grass grows abundantly in grasslands throughout much of North America, and is particularly abundant in our Meadow Garden. While the panicles of this tall, stately grass are bedecked with bright yellow stamens during late summer, they take on a feathered, luminous appearance in late September when the grass sets seed. In the fall, the hillsides of the Meadow Garden practically glow when the morning light catches the dense clumps of Indian grass.

This perennial, warm-season grass (not a sedge, contrary to its name) thrives in thin, dry soils where other meadow plants would struggle to grow. Relatively non-descript during much of the growing season, broom sedge truly comes into its own during late fall, leaving the eastern slopes of Longwood's Meadow Garden awash with the copper and orange tones of its winter foliage. While its allelopathic tendencies can make it difficult for this grass to play well with others in a garden setting (as its dying tissues release herbicidal chemicals), ornamental varieties are becoming increasingly popular in coastal xeriscaping and erosion control projects.

This late-flowering Eupatorium blankets the northern edge of Hourglass Lake with its flat-topped, cloud-like flowers and intricate leaves. Mass plantings of hyssopleaf thoroughwort can be truly spectacular in the early fall, especially when paired with ornamental grasses like little bluestem (Schizachyrium scoparium) to bring some welcome fall color to drier areas of the Meadow Garden.

The spectacular red and burgundy leaves of this native vine practically carpet some areas of the Meadow Garden along the Forest Edge—a perfect complement to the fall foliage of the many maples and oaks that it climbs upon. Unlike many ivies, Virginia creeper is an ideal shading vine for buildings with masonry walls, as it adheres to surfaces using adhesive disks instead of penetrating roots. In addition to its desirable ornamental qualities (rapid growth, attractive foliage, and hardy disposition), Virginia creeper is also an ecologically important species that provides food and habitat for a wide variety of species—including eastern bluebirds, pileated woodpeckers, and Pandora sphinx moths.

The final movement of the Meadow Garden's floral symphony—the brilliant white, pink, and purple hues of asters—bring the growing season to a close in spectacular fashion. These native perennials come in a dazzling variety of shapes and colors, and are one of the last major food sources for bees and other pollinators before the advent of winter. While Longwood's Meadow Garden contains many different species of asters, white wood aster (Eurybia divaricata), New England aster (Symphyotrichum novae-angliae), and New York aster (Symphyotrichum novi-belgii) are particularly abundant, and can be found throughout the garden from early September to late October.

As the days shorten and the temperatures drop, it is a time for both reflection and future planning. While the project has been an incredible success (one of our happiest "problems" has been that we have had more guests than our grass trails can handle!), there is still much work to be done. Already, we are working to put in several hundred new trees and several thousand new wildflower plugs for the coming year with the help of our amazing volunteers. Despite a relatively dry summer, our new plants are flourishing and have been busy putting down extensive root systems all summer long. Young meadow plants, as the adage goes, tend to "sleep, creep, and leap" during their first three summers, investing large amounts of energy in root and shoot development before blooming dramatically in their third year. So if their already spectacular showing this summer is anything to go by, I can hardly wait to see how this garden will look in the coming years!

Photos, with exception of Andropogon virginicus, by Colin McCallum-Cook.