This winter, keep a sharp eye out for feathered friends throughout the Gardens as they prepare for the long season ahead. While some are merely passing through, many call the Gardens home year round. Here are a few of our favorites to watch for during your visit.

During the fall and early winter, visitors may catch a glimpse of a different sort of guest gliding low and specter-like over the Meadow. Long-tailed and slim with an owlish face, this distinctive hawk is the northern harrier (Circus cyaneus). Hailing from the marshes and prairies of Canada and the northern United States, most harriers are long-distance migrants, sometimes flying as far south as Central America each winter in search of warmer climes. Longwood's Meadow Garden has provided these birds with the perfect pit stop this year, where thick low vegetation and a booming population of meadow voles (the harrier's preferred winter food) make for excellent hunting.

Many people are familiar with the sight and sound of this striking, assertive bird. Like many corvids (members of the crow family), the blue jay is extremely intelligent, and has been known to use tools in captivity and to imitate the calls of predatory birds to scare away the competition. A common sight at the bird feeder in winter, the blue jay is quick to spot a good meal and will eat virtually anything (though they prefer insects and acorns). This species also plays an important role in forest ecology, as their appetite for acorns is thought to have facilitated the reforestation of oak trees after the last ice age. The blue jay is a yearlong resident of the Gardens, and can be found throughout the property. Look for them wherever food is present—particularly in Peirce’s Woods, the Forest Walk, and at the Wildlife Tree by the Canopy Cathedral Treehouse. 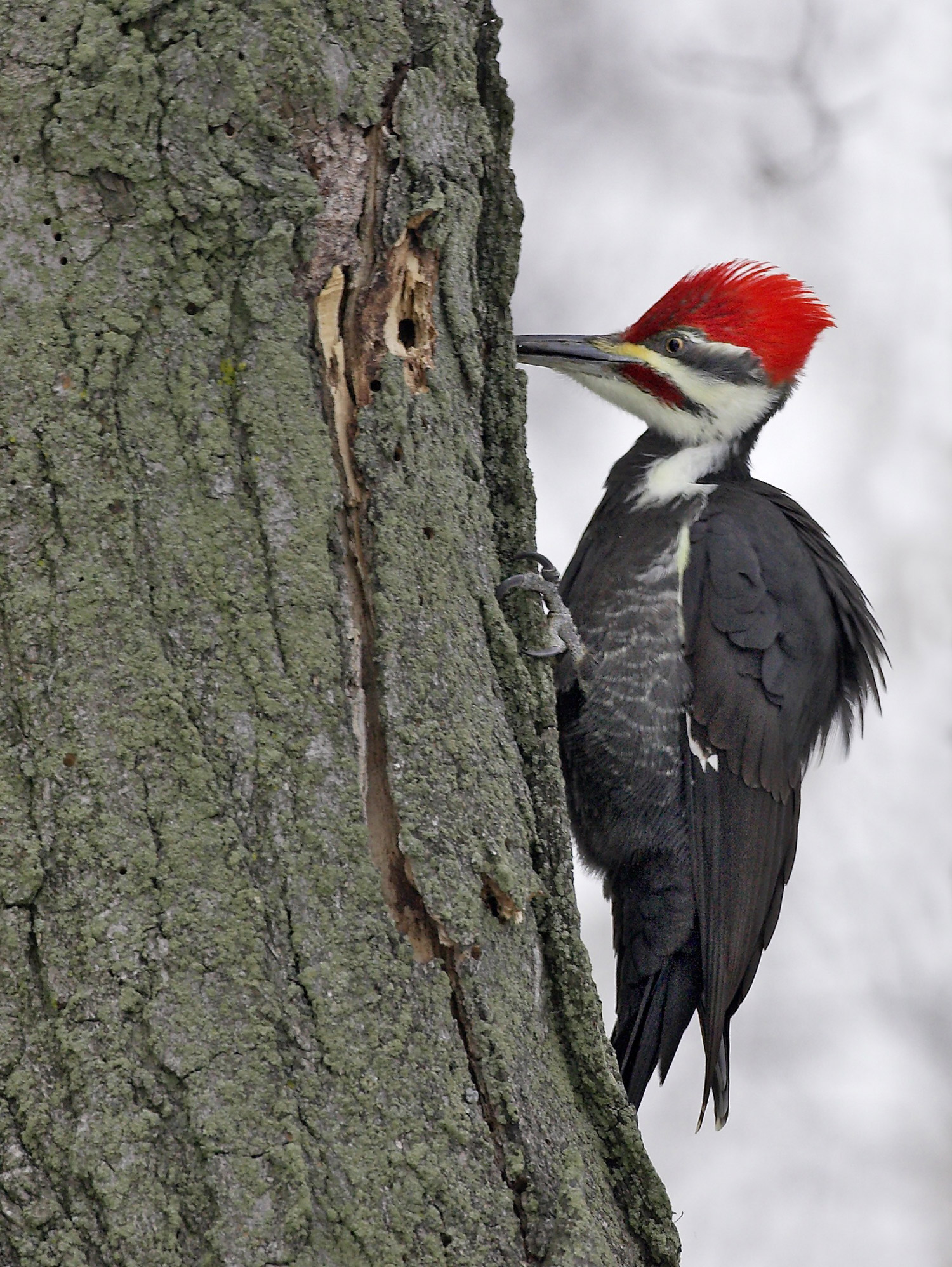 You're much more likely to spot the handiwork of America's largest (living) woodpecker well before you see the bird itself. The pileated woodpecker excavates its large nest from the trunks of dead trees, building a new one each year. Many of the dead snags in the Forest Walk and other natural areas of Longwood are veritably pockmarked with their abandoned nests, which provide valuable habitat for other cavity nesting birds and mammals—including wood ducks, eastern bluebirds, and flying squirrels. For this reason, the Natural Lands team here at Longwood strives to leave a healthy supply of suitable snags standing (about 5–10 per acre of woodland) as part of our sustainable woodland management strategy. In addition to providing habitat for many forest creatures, the pileated woodpecker also helps maintain the overall health of the forest by consuming large amounts of bark-burrowing insects. Look for the sights (large rectangular holes) and sounds (a loud steady hammering) of their foraging in the Forest Walk and the northern edge of the Meadow, where they can be found year round. Read a previous post about the pileated woodpecker.

One of our most recognized and beloved birds, the chickadee is insatiably curious. Sociable and charismatic by nature, the Carolina chickadee is made even more endearing by its large head, round body, and childlike appearance. Chickadees will eagerly investigate anything and anyone that enters their territory, and communicate their findings with complex, language-like calls that are flock specific. They have also been known to cache surplus food in many different locations, which they are able to relocate with surprising accuracy. In fact, chickadees often have so much spatial and social information to keep track of that some species must reset their neurons periodically to conserve space in their tiny brains. Carolina chickadees can be found throughout the Gardens year round, but during the winter they tend to congregate in small flocks around people and food. Look for them near the Terrace Restaurant, the Wildlife Tree, and anywhere nuts or berries can be found.

Though he maintains an air of royalty, this "king" of the water is actually much smaller than his loud, rattling call would suggest. The belted kingfisher can be most often seen perching and preening imperiously on snags above bodies of water, watching for prey before diving headfirst into the water in pursuit of small fish and amphibians. Its large head, oversized crest and bright blue plumage give the belted kingfisher a distinctive profile, and can make this top-heavy bird seem imposing for its small size. Belted kingfishers build their nests in burrows along the water's edge, and can travel widely—sometimes as far as Europe and the Galapagos Islands—in search of suitable habitat. They can be found at Longwood year round at Hourglass Lake, where the clear water, fallen timber, and sparsely vegetated banks are well-suited for fishing and nesting.

Whether migrating in large, noisy flocks or floating gracefully on your local pond, the Canada goose is certainly a hard bird to miss. This large waterfowl flies in a distinctive V-shaped pattern that helps conserve energy by reducing wind resistance, and can travel in flocks of thousands during their spring and fall migration. Increasingly, however, this bird has gained a reputation of overstaying its welcome wherever the local climate is able to support non-migratory populations year round. Ironically, the dramatic rise in "resident" Canada geese is the result of an overly-successful reintroduction program for the critically endangered subspecies of "giant" Canada goose, Branta canadensis maxima. Once thought to be extinct, a small population of this non-migratory subspecies has grown to massive size in a matter of decades. Look for them near any body of water at Longwood, particularly Hourglass Lake and throughout the Italian Water Garden. 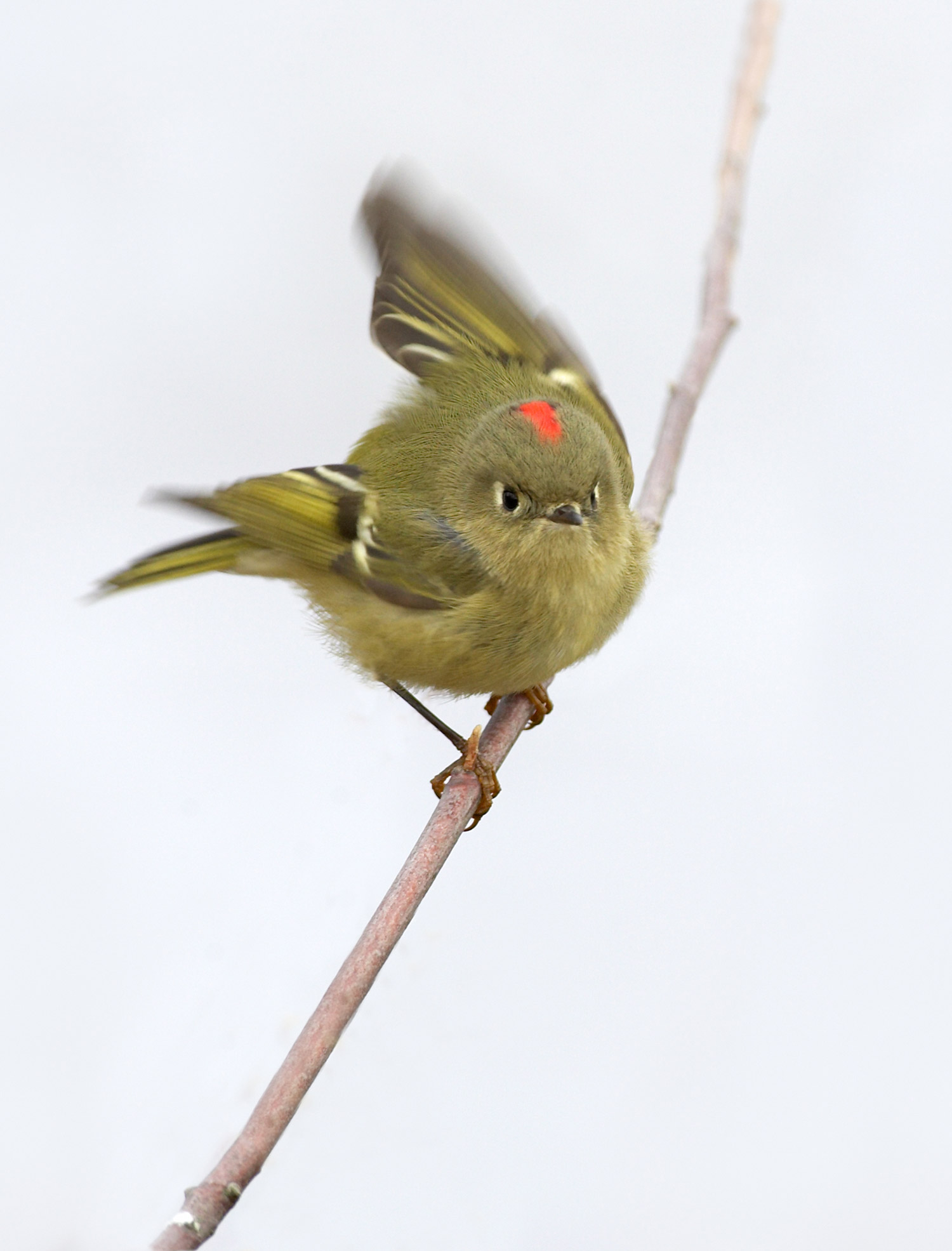 This energetic little kinglet is one of the smallest songbirds in North America, weighing in at around 0.2 ounces. Despite its small size, the ruby-crowned kinglet is able to fly all the way down from its breeding grounds in the boreal forests of northern Canada each year to overwinter in the southern United States. Large numbers of them can be found flitting about the Meadow Garden during the winter months, where they feed voraciously on insects, berries, and seeds. While the males of this species do possess a bright red "crown" of feathers, this identifying feature is usually hidden except when the male is displaying or feeling threatened. As male ruby-crowned kinglets compete by singing rather than fighting or chasing, it is often best to identify this species by its tendency to flicker its wings and hover constantly while feeding.

One of the most common migratory ducks, the ring-necked duck can travel in flocks of thousands during their fall migration from the boreal forests of Canada. They are best identified by their distinctive, peaked head rather than their eponymous “ring” (which is very hard to see). Like all diving ducks, ring-necked ducks swim rather than dabble in order to feed on aquatic plants and macro-invertebrates. Unlike other diving ducks, this species is perfectly content to feed in small, shallow bodies of water—which, much to the delight of birders, makes it much easier to observe up close. Ring-necked ducks can be found occasionally on Hourglass Lake during the fall (late September through early December) and spring (early February through March) migrations.

More on Research and Conservation
Name of the Botanical Game
By Anthony S. Aiello, on September 13, 2021
Read More

There are no more events for today.