Something to See: The Rare V3

Orchids, once the preferred house plants of the aristocracy, have become very popular in the United States. As a plant group, they now represent the most popular flowering potted plant sold in the US, and it’s easy to find them in large chain home-improvement stores, grocery stores, florist shops, and garden centers. Longwood staff members use their imaginations and spirit of innovation to create displays that capture the wide diversity of this plant family and showcase the blooms in artistic forms such as hanging orbs, obelisks, and meadows.

Phalaenopsis Sogo Yukidian ‘V3’ on display at the Miracle Planet Museum of Plants in Awaji, Japan, 2008. Photo by Jim Harbage.

By far, the most popular orchid genus is the Phalaenopsis, or moth orchid, because of the ease and speed at which they grow and because of their reliable flowering and long bloom duration.

This year, we’ve brought a unique and rare Phalaenopsis Sogo Yukidian ‘V3’ hybrid to Orchid Extravaganza, which we believe is being displayed for the first time in a US public garden. The ‘V3’ moth orchids featured on the center walk of our Orangery have unusually long flower spikes with as many as 18 open flowers on a single spike (with more buds yet to open)! Typical moth orchids produce six to ten flowers.

We first saw these plants during a visit to a display garden in Japan in 2008. Immediately our horticulturists knew we wanted to bring these amazing orchids to Longwood Gardens. The desire grew when staff members saw these specially-grown plants again in 2012 at a commercial greenhouse in China, where they are called “long stem butterfly orchids.” 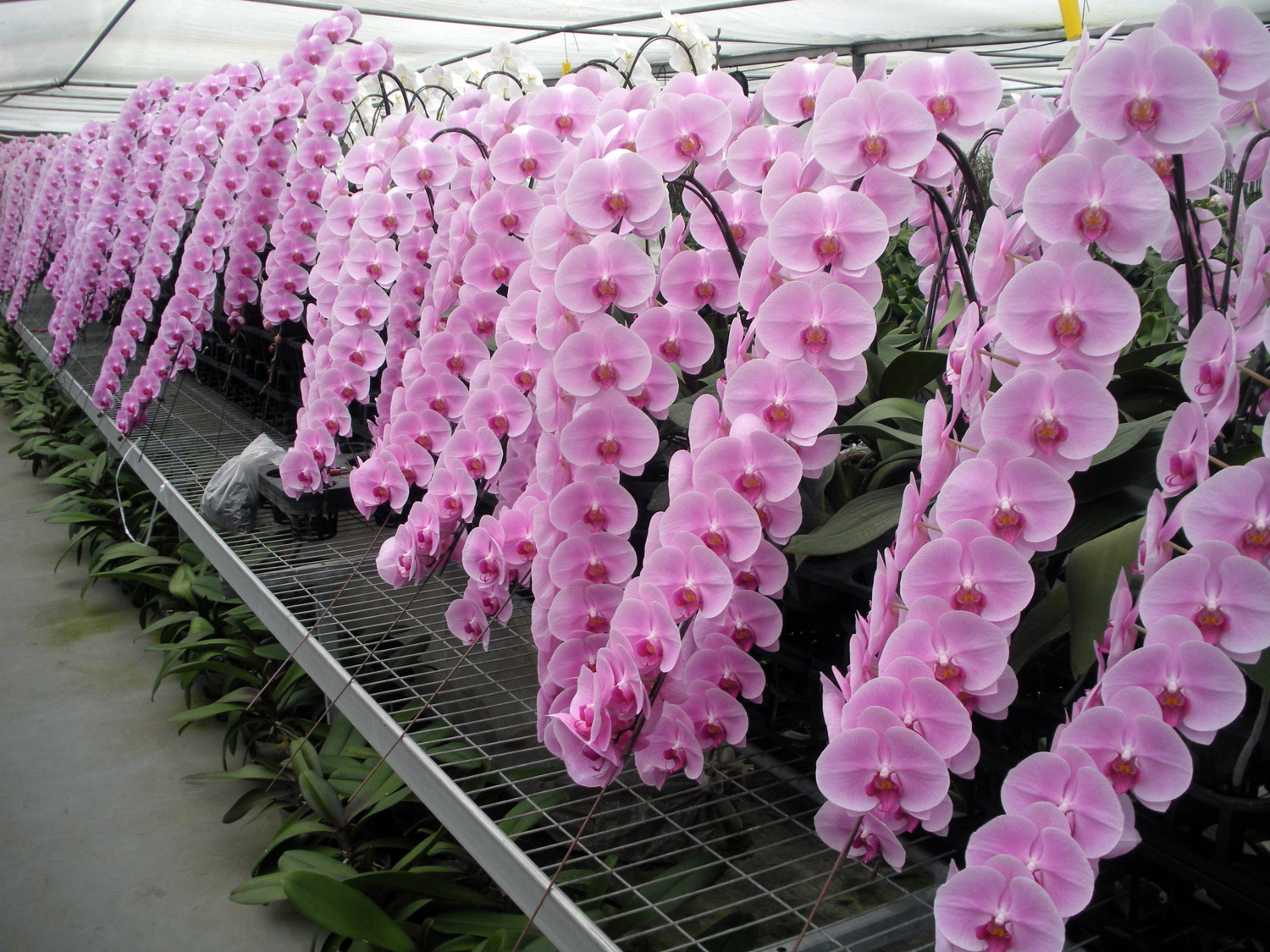 During this visit, we asked the greenhouse manager where the plants came from and learned they were imported from Taiwan. So our search began! Since our domestic growers are not yet trained in the methods to produce these plants, our approach was to find a way to purchase orchids from the experts in Taiwan.

We were very excited when we learned of the possibility of purchasing some ‘V3’, the white-flowered variety, through a wholesale orchid grower with whom we work on a regular basis. This vendor has a connection in Taiwan and was able to secure twelve of the ‘V3’ for Longwood! Our order was placed in the summer of 2014, to arrive in mid-January for our Orchid Extravaganza display.

The plants were shipped with 70% of the flowers fully open, and the stakes removed so they didn’t damage the blooms. They were carefully packed in long, flat boxes with white cotton batting. After passing inspection in Taiwan, they were shipped via overnight air to New York, where they cleared US Customs before being delivered to Longwood. 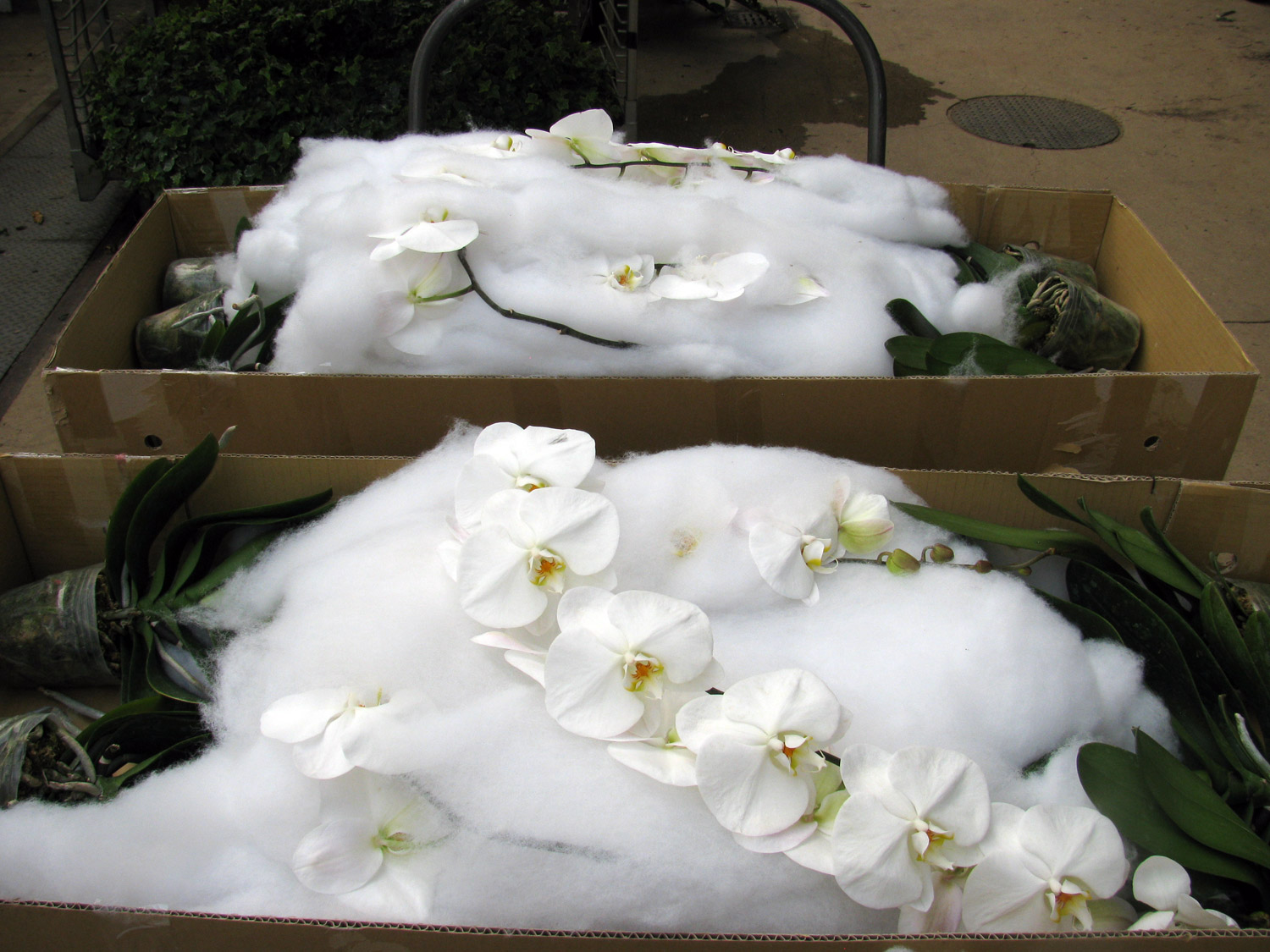 Once they arrived, we carefully removed the plants from the packaging, taking extreme care not to damage either the flowers or the heavy flower spike. The plants were very top heavy, so we temporarily stabilized them in clay pots, while we reinserted the stakes.

It took two of us to do the restaking—one to support the heavy stem from both the top and the bottom, while the other added a bamboo stake for strength and a flexible wire stake to curve along the flowering stem. Next, we moved the plants to a shady, 60-degree greenhouse to acclimate them before moving them to the Conservatory for display.

Gardener Lauren and Lee placing a small bamboo stake through the bottom of the pot to help stabilize the plants within the display urns. Photo by Trilbey Smith.

The technique of producing these special plants is a highly specialized process practiced by only a small number of expert growers in Taiwan. We learned that there are two hybrids used to grow these special forms, Phalaenopsis Tai Lin Red Angel ‘V31’ and Phalaenopsis Sogo Yukidian ‘V3’. They take four years to grow, as the plants need to produce at least ten leaves before they are allowed to flower. During the first three-and-a-half years the plants are grown at elevated temperatures, without fluctuation between day and night, to prevent flowering and to build energy in the plant. Even the water and fertilizer used on the plants is heated. During this stage they are fed with a balanced liquid fertilizer such as 20:20:20 analysis and repotted regularly, ending with a 12”-diameter pot size, to encourage a very healthy root system and to build energy reserves in the plant.

The finished display in our Orangery, enjoyed by thousands of visitors during Orchid Extravaganza. Photo by Trilbey Smith.

Once the plant has reached the necessary size, flowering is initiated in two stages: first, about six months before the desired bloom-time, the fertilizer is changed to an analysis high in phosphorus and potassium; then, two months prior to the desired bloom-time, temperatures are adjusted down to a moderate level, with some fluctuation between day and night. As the flower spikes develop, the plants are placed facing south and the spikes are trained along a curved metal stake to yield the perfect final presentation. These orchids are notable for the length of time they hold their flowers, the perfect unity of the flower pairs, and the sheer number of flowers blooming at one time on each flower spike.

Visit Orchid Extravaganza to see these rare, masterfully cultivated examples of one of nature’s most beautiful plants.