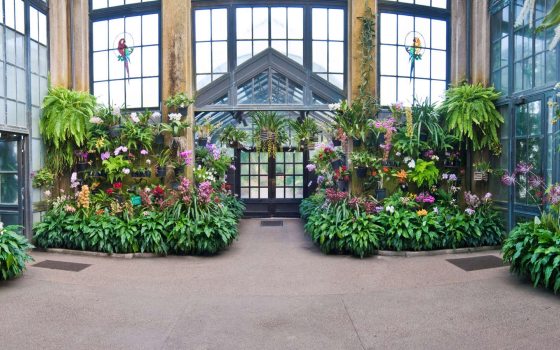 Every day our guests marvel at the Orchid House in the Conservatory, but very few witness all the work that goes into creating this spectacular display. Let’s take a quick peek behind the scenes to see what goes into curating such a beloved exhibit, explore how we select plants for display, and examine how we best showcase their beauty—and lengthen their lifespan—by placing them in certain areas of the Orchid House.

Generally, we have between 200 to 300 orchids on display in the Orchid House; but in order to showcase that many flowering orchids at any given time, we must rely on the depth of our entire orchid collection of nearly 6,000 plants. Most orchids only flower once a year, but when they do, many of them stay in flower for two to six weeks or more (although some have flowers that only last one day!). Therefore, we always have orchids coming into and going out of flower. To keep the Orchid House full of orchids in peak bloom, a team of 10 orchid display volunteers works more than 50 hours a week collectively, changing out the display.

The Orchid House display is changed out early every Monday, Wednesday, and Friday morning. If you were to arrive just as the Gardens open at 9:00 am, you might even be able to see us finishing the change out after hours of work that morning, which starts with gathering orchids just coming into flower from our five orchid growing houses. We gather approximately 15 to 30 plants, clean them, and stake them. They are then taken to the Orchid House, where plants with old flowers are removed and plants with new flowers take their place. It is not quite as simple, however, as changing out plants with old flowers and replacing them with plants showcasing new flowers.

We take many factors into consideration to ensure that the Orchid House space is well utilized and that the display is full and balanced. We select plants based on plant height, color, pot size (since they must fit in the ring), and even genus, among other factors. Plants that are too large for the rings or too tall are placed on the floor in ring stands. Many of our Dendrobium grow to be three to four feet in height, which means they are far too tall for the spaces on the wall, but perfect for sitting on the floor, rising out of the Spathiphyllum.

Certain genera are kept in specific areas of the display in order to lengthen their lifespan. For example, cooler growing orchids are kept in the alcove of the display as much as possible, because the alcove stays cooler and helps the flowers last longer. The types of orchids we keep there are mainly in the Pleurothallid Alliance, and include Masdevallia, Dracula, and Restrepia. All these genera grow in the Andean cloud forests, and their short-lived flowers last a bit longer in the coolness of the alcove. We also try to keep our Miltoniopsis in the alcove, as they too prefer the cooler temperatures.

The two antique cases in the orchid display (they are more than 90 years old now!) contain Cattleya; one case contains white Cattleya and the other contains purple Cattleya. There is an old rumor that this is the way that Mrs. du Pont wanted the Cattleya displayed, but that is untrue. Pictures taken of the cases from the 1920s and onward reveal that many different orchids were used in the cases. We currently display the Cattleya this way because it is a wonderful way to highlight the heart of our collection.

Early in the days of orchid growing, purple and white Cattleya were used for corsages on Christmas, Mother’s Day, and especially Easter. Therefore, there was much breeding done with these groups, which made them some of the most popular and available orchids around—not to mention some of the most beautiful. It is not surprising, then, to find that many of the oldest plants in our collection, and the largest constituent of the orchid collection, are cut flower Cattleya.

There are also other genera, or even specific plants, that are kept in certain areas throughout the Orchid House to highlight their beauty in a special way. A great example of such placement is the Calanthe. Calanthe are deciduous orchids that have long, gently arching inflorescences that carry 10 to 30 flowers. In order to highlight their shape, we place them at the base of the alcove, so that their arching heads lean toward the aisle. As you walk through the alcove, you see them primarily from the side, and this perspective allows you to appreciate the shape of the inflorescence. Arranging them in a linear row creates a cascading effect that allows you to appreciate their floriferous nature and amassed impact.

But that’s not all! If I were to write about every interesting orchid that will be on display during Orchid Extravaganza, well, I’d never be able to stop writing. During Orchid Extravaganza we will be highlighting rare, interesting, and huge orchids in special ways throughout the Conservatory. Many of these will be placed in a vignette in front of the Ballroom across from the Patio of Oranges. Some will also be in Wardian cases in the Banana House, while others will be highlighted in the Orchid House itself. Among those highlighted will be our black orchids, × Fredclarkeara After Dark ‘SVO Black Pearl’; our rare European terrestrial orchids, such as Ophrys tenthredinifera, one of the bee orchids; and our huge Dendrobium, some of which stand six feet tall and others of which are six feet wide! Many of these plants will only be in flower for a few weeks, so they will be rotating through the display areas. Keep an eye on our social media as we will be highlighting interesting and beautiful orchids throughout the season.

This is only the beginning—there are always interesting and amazing plants on display in the Orchid House, and Orchid Extravaganza is a wonderful time to come see them!