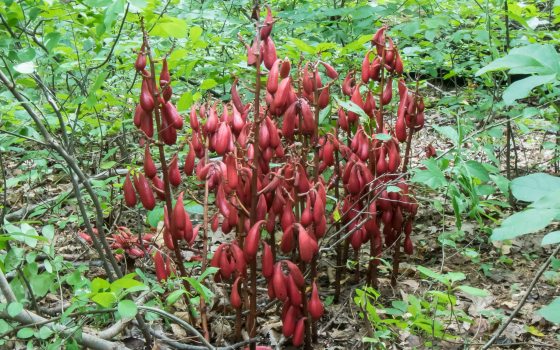 Phantasm of the Forest

Editor's Note: This blog article was amended on 1/9/19 to add information about the invasive potential of the Cyrtosia orchid and our research and monitoring to prevent such risk.

Many guests visit Longwood Gardens to appreciate, enjoy, and study our carefully curated, world-class collection of more than 11,000 kinds of plants. Occasionally, plants find their way to the Gardens without the assistance of horticulturists—some of these are native species not previously found at Longwood that have found a happy home in Longwood’s natural lands, while others are unwanted invasive species. Very rarely, a plant is found that defies logic and provides insight into the horticultural history and ecological health and capacity of the interface between Longwood’s gardens and natural lands.

In July 2018, Longwood’s Director of Library and Information Services David Sleasman spotted the bright red fruits of a ghostly, striking plant growing along an access road in one of Longwood’s naturally forested areas and immediately queried the curatorial office about its identity. It was identified as Cyrtosia (syn. Galeola) septentrionalis, a hardy, Japanese native orchid known for its medicinal properties and peculiar life history. While it is not unusual to see orchids in the Conservatory or outdoor gardens, the occurrence of this species is truly an anomaly due to its highly specific requirements for seed germination and growth. In fact, it’s considered impossible to cultivate and has never previously been found in the United States. So what makes Cyrtosia so special—and how did it come to be at Longwood?

Cyrtosia belongs to a highly specialized group within the orchid family known as mycoheterotrophic orchids, which obtain some degree of their food or nutritional needs from fungi, rather than making it themselves through photosynthesis. Cyrtosia is an obligate mycoheterotroph—all of its food comes from parasitism of a common parasitic fungus called Armillaria, known commonly as shoestring or honey fungus. The reliance on fungi is evident by appearance of the plants; they are achlorophyllous, meaning that they don’t produce leaves and chloroplasts necessary for photosynthesis. Without the fungus, these orchids cannot survive. This relationship is extremely difficult or impossible to replicate in cultivation, begging the question: how did these orchids find their way to Longwood Gardens and how long have they been there?

Although Longwood has a rich history of importing and promoting plants from Japan, how Cyrtosia arrived at the gardens remains a mystery. Since is it is impossible to cultivate Cyrtosia in a garden setting, it is also impossible to purchase from Japanese nurseries, and accordingly there are no official records of its introduction in the plant accession database.

Conversations with former Longwood employees and students involved in past plant exploration and importation efforts have suggested that the introduction of this species was accidental. It is plausible that the tiny, long-lived seeds of Cyrtosia hitch-hiked their way to the Gardens on the roots of other plants imported from Japan. This makes sense considering the location of the plants near the experimental greenhouses, the first place many imported plants would have been first grown at the Gardens.

While it may seem unremarkable, the fact that appropriate fungi exist to support the germination and sustained development of this orchid cannot be understated. There are at least 10 individuals of Cyrtosia growing in widely scattered parts of the naturally forested area and some of them are large clumps of multiple stems—suggesting that not only have the plants been there for a long time, but they are thriving! Their presence provides clues to the quality and plasticity of the historic woodlot ecosystem where they were found, suggesting that it has been stable and healthy over a long period of time. Coincidentally, the three birds orchid (Triphora trianthophora), a very rare native orchid in Pennsylvania, was also found in the same historic woods.

Cyrtosia is also unique in other ways. The bright red, banana-like fruits are meant to attract birds. Birds feed on the sweet, fleshy fruits of the orchid and, in doing so, eat the seeds. The seeds are then dispersed as they pass through and out of the bird’s digestive tract, making Cyrtosia one of a handful of the 25,000 to 30,000 orchid species in which seeds are not dispersed by wind. Unlike other orchid seeds, which are dust-like, Cyrtosia seeds are comparatively large (although still very small!) and possess a circumferential wing, making them look like miniature flying saucers upon close inspection. We have not found evidence that birds are eating the seeds of Cyrtosia at Longwood, but while searching the woods for plants, many partially eaten fruits were discovered throughout the woods and sometimes at appreciable distances from the parent plants. It appears that squirrels, not birds, can also use the fruits as a food source and may be responsible for distributing them throughout the woods.

As introduced species carry the potential to be invasive, we are closely monitoring the Cyrtosia to prevent further spread in our natural areas and beyond. After discovering this species on our grounds, our natural lands team scouted the entire property for additional plants. All of the plants we have found are confined to a single woodlot that is bound on all sides by roads. This appears to serve as a barrier to further spread, although we are still gathering information. We will monitor all of the plants at flowering and fruiting time and continue to scout other forested portions of the property in the coming years. Since this species has such a specific relationship with Armillaria fungus, we also wonder if further spread may be limited because the fungus it is associating with is limited in distribution. We are currently growing the fungus in our tissue culture lab and have partners that will use molecular tools to provide an identification. With this we can learn much more about the potential ecological breadth for the orchid in our region and begin to determine its invasive potential.

At this point, we don’t feel that Cyrtosia is displacing any native species or displaying invasive potential. In the event that it appears the Cyrtosia is aggressively spreading into natural areas surrounding Longwood, we will eradicate it. Over the years this has been done for several plant species introduced to the Gardens and we constantly monitor our natural lands for invasions. We also discuss potentially invasive species with other public gardens in our region so we can prevent them entering the property.

Another interesting trait of mycoheterotrophic orchids is their ability to enter prolonged dormancy. Some of these orchids are known to flower one year, but may not be seen again in the same place for a number of years, only to reappear and flower after a substantial length of time. Longwood Research and Conservation division staff members will census the plants each year to determine if they also display this trait and determine the extent of and record variations in yearly flowering and fruiting patterns. In the meantime, staff scientists will attempt to propagate this species by growing the fungus and the seeds in strictly controlled laboratory conditions to learn more about them and how they arrived and have persisted at Longwood. This effort will support other current research initiatives to learn more about the conservation horticulture and collections development of Pennsylvania native orchids that will one day be used in garden displays and in the restoration of Longwood’s natural lands.

As a side note, at least 55 different kinds of orchids are native to Pennsylvania. Some of these, such as the coralroots (Corallorhiza), are mycoheterotrophic and superficially similar to Cyrtosia. At least one of these, Corallorhiza maculata, can be quite showy in flower. However, these orchids are impossible to grow in garden settings and should be left in their native habitat for all to enjoy.