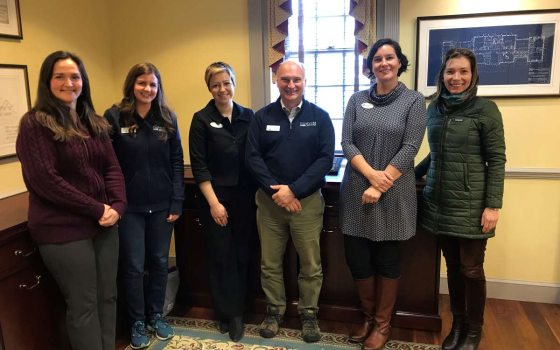 During visits to regional gardens for salon-style discussions, the Longwood Fellows are given the opportunity to learn firsthand from experts in the field of public horticulture.

Hosted by Delaware’s Mt. Cuba Center, this latest salon provided the Fellows with insight on human resources leadership and management—a topic that complements the Fellows Program examination of the important role of relationships in effective leadership.

Mt. Cuba Center is the former family estate of Lammot du Pont Copeland and his wife Pamela Cunningham Copeland. The estate’s woodland garden is known for its spectacular display of native wildflowers and attracts visitors from spring to fall when it opens to the public. We met with Executive Director Jeff Downing and Director of Human Resources Colleen Clark in Mt. Cuba Center’s stately manor house, the former home of the Copelands, and discussed how the organization has been weaving its human resources into the fabric of strategic planning for the future.

Downing described some of the key goals of the strategic plan, which was set in 2015. The goals include inspiring and motivating people into conservation action, measuring the impact of their own research and conservation efforts, and advancing institutional sustainability and organizational effectiveness. This last part is where the human resources come in.

Working together, Downing and Clark realized that in order to attract and retain their most valuable resource—people—the organization needed to first review its compensation and benefits offer. Until that point, Clark describes Mt. Cuba Center as having made most decisions on intuition, sharing “ … while intuition has a place when it comes to decision making, compensation for the employees is not one of them.” The process began with job validation, where employees helped leaders gain a true understanding of roles and job descriptions, which in turn led to benchmarking of similar roles at other organizations. With this data Mt. Cuba Center could position themselves as an “employer of choice,” as explained by Downing, and with the support of the board they set their compensation packages above the median of similar institutions.

Downing and Clark also chose to implement a “Workforce Planning” project, partly due to the organization’s evolution from a private estate to a public garden; a change that Downing likens, rather aptly, to the growth of an unpruned tree. In order to make the organization and its precious human resources most effective, it needed some restructuring.

The Workforce Planning project brought in a consultant who, with an objective perspective, was able to help the leadership team consider the future for the organization’s staff composition, and how it would best align to the strategic plan and ultimately the mission. In the past year Mt. Cuba Center has carried out some restructuring to become more efficient and effective; Downing believes that the restructuring has resulted in better and quicker decision-making.

Clark reflected on another staff-centered success: the identifying of organizational core values. As Clark says, the success lay in the fact that these core values were “built from the ground up” and have gone so far as to be adopted by the board as a code of ethics. It appears the values are reflected in the culture of the institution, which is one of inclusivity, collaboration, and respect.

It was clear to see that Mt. Cuba Center considers its people, its human resources, as critical to the success and sustainability of the organization. We are left to ponder this, and our other salon discussion topics, as we depart for our two-month field placements around the world. Check in again soon for more on the Fellows’ travels and leadership development!