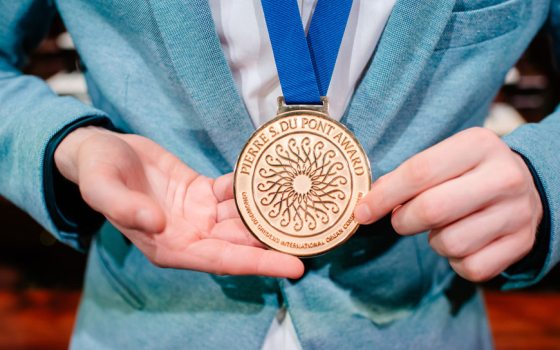 It Takes a Family

Editor’s Note: Haig Mardirosian, master of ceremonies for the 2019 Longwood Gardens International Organ Competition, has been a concert organist for more than 50 years and has more than 20 commercial recordings as soloist, ensemble performer, and conductor to his credit. As an academic administrator, he served as Dean of Academic Affairs and Senior Vice Provost at American University in Washington, DC, and as Dean of the College of Arts and Letters at the University of Tampa.

There is a conventional side to this story. During a moody week of weather in June, in the bucolically fragrant and shaded surroundings of Pierre S. du Pont’s country retreat, we hear ten young virtuosos hoping to snare the gainful first prize in the Longwood Gardens International Organ Competition. Easy. Apply, audition, survive the cut, advance to the finals, and sway a panel of expert judges to see it your way. It provokes a basic question: who will persist and win it all?

But putting it in such crass and shallow terms demands that one shutter an eye toward the deeper narrative, that of establishing, celebrating, and growing a mighty and multi-tiered community having at its center not only the pipe organ, but this pipe organ among pipe organs, this setting of peaceful and captivating sensuousness, and the acidic juice of global-scale competition at towering levels.

A deeper glance suggests an extraordinary story unraveling itself: that of a committed community around the organ, these brilliant players, and those who hear, judge, and organize this remarkable event. It is not stretching things to call them a family.

Consider the unwavering audiences occupying a goodly share of seats in the Longwood Ballroom. At its heart are those who have patronized the competition from the beginning—the faithful returning each three years since 2013. But to the delight of organizers who request show-of-hand surveys at most sessions, a fair slice of the audience has come to the experience afresh. The community, thankfully, grows.

As master of ceremonies for the 2019 competition, I keyed my own remarks (“sermons,” one audience member called them with an edge of droll sarcasm) to the inquisitiveness of the spectators. As in any family, listening is golden. I stood outside the Ballroom during breaks in the musical action and took note of the perceptive queries. In turn, I riffed on them in subsequent talks.

A mere audience family, though, would scarcely prove the point at hand. Go to the local opera company or symphony (and I mean go to the local local opera or symphony) and witness the same phenomenon. People who aggregate themselves around these hubs celebrate their common passions.

The judging panel also developed strong familial bonds. A week together allowed the gentle greetings and formalities of first introductions and renewed acquaintanceships to flower into the familial bonhomie of poking, cajoling, joking, and smiling their way through the serious stuff of refereeing and the recreational episodes, the (many!) meals, receptions, cookies, and salty snacks that peppered the day. The judges carried on with bona fide amiability. And around them were the Longwood hosts and unità operativa that together breathed a regular heartbeat, energy, and a generous share of balmy good will into the proceedings.

One of the cheerful differences in a competition as this between young rivals and its counterparts “back in the day,” agreed many of the judges, was that today’s family has been behaviorally transformed. The high-voltage past heroes underwrote the history of fierce battle, of winning at any cost, of strategically disadvantaging others to seize the high terrain. Back then, it bordered on the brutal.

Today’s competitors proceeded as a band of brothers—and the gender reference is specific given the blind review given applicants, a happenstance that yielded an all-male field. Several were supported by their blood kinfolk—parents dotted the ballroom. As for the ten, they put their fraternal bonds and compassion on view. Families may harbor differences for sure, but they heal breaches just as certainly.

While eyes focused on the champions among champions as judges’ decisions were announced, medals and plaques bestowed, and flowers garlanded, there was a poignant and uplifting side to shifting the gaze around the standing throng to survey those now left just out of the spotlight, who had fought their hardest, left their passions and imaginations behind at the console of the Aeolian, and who had just fallen a measure short.

Winning is more than besting others. Winning at times, perhaps too often, means just getting up, dusting oneself off, and carrying on. And these champions of Longwood taught us the deep meaning of family as those who had run only to earn the mere opportunity of rising from defeat were quick to offer a consoling pat on the back or a hand of sympathy and understanding to one another. With bitter disappointment etched on faces and the stoicism to hold back tears, this group of champions both cheered heartily for those who had carried the day, and for each who had worn the coarse, gritty cloak, who ran the race only to stumble. It was a drama fit for a marathon. How often do we witness the heart-wrenching sight of a genuine champion who staggers just yards short of the line then to be lifted up by a co-player and carried across the boundary to the celebration of true, dignified victory.

As always, Shakespeare has a way of putting it:

“Do as adversaries in law do; strive mightily but eat and drink as friends." —The Taming of the Shrew, Act I