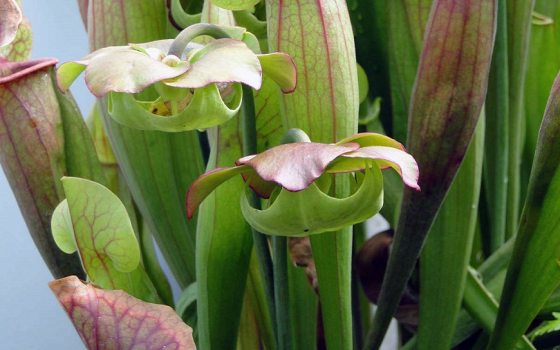 Hungry for History: Our Carnivorous Collection

With their visual appeal and botanical interest, it is little wonder that carnivorous plants have long had a place on display at Longwood Gardens. Longwood’s founder Pierre S. du Pont was sent Venus’ flytraps (Dionaea muscipula) in 1935 from Florence A. White, a teacher from Wilmington, NC who had visited Longwood and thought he might like the North Carolina native. Mr. du Pont, a true plant aficionado, thanked her in a letter “for the very interesting specimens of Venus Flytrap, which I have known of for a long time but have not before seen. I am sure it will create much interest among our visitors.” While we don’t know if Mrs. White’s plants were ever put on display, we do know that Longwood started ongoing displays of carnivorous plants in the conservatory in the early 1960s. Through the years, we have featured these interesting plants in our Conservatory and in seasonal outdoor displays, much to the delight of guests of all ages.

In the beautifully illustrated Weird Plants, one of our 2020 Community Read books, author Chris Thorogood profiles seven groups of unusual plants he calls Vampires, Killers, Fraudsters, Jailers, Accomplices, Survivors, and Hitch-Hikers. Killers are carnivorous plants, and while that term may seem menacing for a plant, their carnivory is for survival—not some more nefarious purpose. There are currently almost 600 carnivorous (or insectivorous) species in existence, which generally inhabit conditions where they cannot get enough nutrients from their environment and must find alternative nutrition. Thorogood, a botanist at the University of Oxford, describes these plants as having “evolved in environments where nutrients are scarce, for example in waterlogged swamps or on rain-leached mountain slopes. They have evolved a bewildering array of lures to attract, trap and digest animal prey to supplement their diet under these adverse conditions.”

These adaptations make for plants that are often visually striking and unusual. Their insect-catching traps include mouth-like snap traps, liquid-filled pitchers, sticky “flypaper,” and more. Imaginations have long been inspired for young and old alike, leading to many fictional books and movies in popular culture that feature man-eating plants. In truth, most carnivorous plants are quite small, and certainly not large enough to set their sights on humans.

Longwood’s collection of carnivorous plants can be traced back to a 1955 internal Longwood report, which indicated that “We are starting to acquire additional collections of new plants of display value to broaden the interest to the public. Such materials include … insectivorous plants.” One of these was a large and varied Nepenthes collection from the Missouri Botanical Garden, brought to Longwood in 1955–56 by retiring former Missouri Botanical Garden superintendent George Pring, and his son-in-law Russell Seibert, Longwood’s then-director. Nepenthes are tropical pitcher-plants that are primarily native to southeast Asia and southern China and thrive in humid conditions.  Most Nepenthes are climbers, growing as vines. Their pitchers are formed from modified leaves, the largest of which can hold more than 3 liters of water. These pitchers trap and digest unwary insects, luring them in with sweet nectar secreted around their rim and lid. The surface around the rim is waxy and slippery, making it hard for insects to hold on. They fall into the pitcher and drown, then are digested by the liquid enzymes produced by the plant. In Weird Plants, Thorogood describes the “King” pitcher plant from Borneo, Nepenthes rajah, which can drown unwary tree shrews that slip into their pitchers!

The Longwood Nepenthes collection was managed by expert grower Patrick Nutt, who also held responsibility for our waterlily collection. He started a hybridizing program with the Nepenthes (as he did with Longwood’s Victoria water-platters), and Longwood continued to collect fine and unusual specimens. For many years, the Nepenthes were displayed in a section of the greenhouse now known as the Mediterranean House.

Longwood’s Nepenthes, managed today by Senior Horticulturist Tim Jennings, are currently displayed in hanging baskets in the Fern Passage, where they can carry out their insectivorous feeding without the danger of curious human hands.

In the early 1960s, Longwood placed a variety of carnivorous plants on display in raised beds in the alcoves of the Fern Passage, where they remain to this day. Long a favorite of visiting children, the position of these carnivores allows for up-close viewing of their special features. The beds were originally enclosed in glass—of course to protect the carnivores from curious humans, rather than the other way around.

The large and widespread sundew genus Drosera features leaves with tentacles tipped with mucilage-secreting glands to trap their prey—a living version of the flypaper you might have hanging at home. The Venus’ flytrap, Dionaea muscipula, is the only species in that genus. Its snap trap is a two-lobed leaf that attracts insects with tempting, bright colors and alluring fragrance, then captures and digests them once its trigger hairs are touched. Sarracenia, native to the eastern United States and Canada, have tubular pitchers formed from leaves ranging from 4 inches to 4 feet tall. Sarracenia also attract insects with their festive colors, and like Nepenthes, with sweet nectar on their lid and rim. Insects fall down the slippery pitcher and are drowned and digested. Like the sundews, Pinguicula also trap their prey on mucus-coated sticky leaves, whose oily sheen gives them their common name of butterwort.

Carnivorous plants are not restricted to indoor use at Longwood. Our seasonal outdoor displays have also featured carnivores, including Nepenthes and Sarracenia. One can imagine that their nutritional needs would be even more satisfied with the abundance of insect delicacies outdoors in the Pennsylvania summertime.

No matter where they are displayed at Longwood, carnivorous plants will continue to inspire and delight all ages, upon our reopening. Until then, take an up-close look at carnivorous plants in this kid-friendly Longwood virtual field trip, designed for grades 3–8—but fascinating for all. Also, follow along with Thorogood as he examines the wonders of the plant world in his Evolution of Killer Plants virtual lecture and follow his journeys painting the world’s weirdest and wildest rare plants in his The Weird, the Wild, and the Wonderful Virtual Lecture, both part of Longwood’s Community Read.