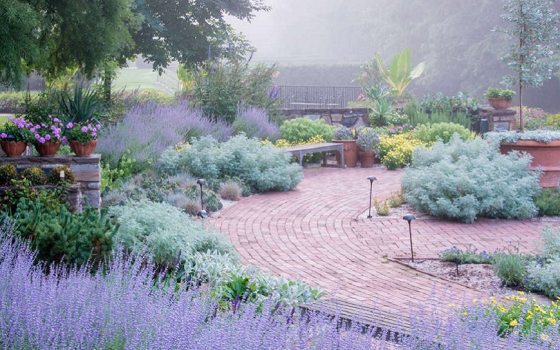 The Drama and Appeal of Our Theatre Garden

“Come, let us sing another song, for summer’s short and winter’s long.” These inviting lyrics, found on a plaque on the stone wall surrounding Longwood’s Theatre Garden, are from a song traditionally performed by The Brandywiners following each Longwood performance. What perfect advice as the weather warms up, the days stretch longer, and the sun beckons us to spend more time outdoors!  Designed by noted landscape architect Thomas Church, the Theatre Garden features drought-tolerant plants that can survive tough conditions … and gives a textural, star-studded performance each year during the summer’s heat and bright sunlight.

Perennials in a multitude of textures and a muted color palette of silver, purple, and pale-yellow form the backbone of the Theatre Garden. One of the garden’s featured plants is trifoliate-orange (Poncirus trifoliata), a thorny shrub with fragrant white spring flowers and a citrus-like fruit in late summer. The small fruits change from green to orange, and the skin can be candied or made into marmalade.

Prickly-pear cactus (Opuntia phaeacantha) is native to the southwestern and southcentral United States and Mexico. Its spine-covered pads have yellow flowers at their tips in late spring, and edible reddish-purple fruits in late summer. Senior Horticulturist April Bevans, who has overseen the Theatre Garden since 2006, says that many guests are surprised that the prickly-pear can be hardy here, and often ask if they will die in the harsh Pennsylvania winter. Because of its resident prickly-pear, trifoliate-orange, and many other spiky plants, April and the other staff who work in the Theatre Garden have lovingly given it the nickname “the garden of a thousand points” (having been on the receiving end of those points during their work)!

Adding to the Theatre Garden’s abundant textures are a variety of yuccas, ornamental grasses, lamb's-ears (Stachys), yarrow, Russian-sage, globe-thistle, and stonecrop. Additional pops of color are provided by annuals and dramatic containers. Not just a warm weather garden, the diverse structures of the Theatre Garden’s permanent plants also provide visual interest in the winter.

The Theatre Garden has been part of Longwood for a considerable 45 years, but another garden stood in its spot for almost 60 years. Pierre du Pont debuted the Open Air Theatre in 1914 at his annual garden party, and by 1916 the adjacent Terrace Garden was constructed. It consisted of three levels with stone retaining walls and steps, and flagstone pathways between the beds.

The Terrace Garden was originally a cutting garden with plantings of tulips and iris. By 1922 it featured mostly roses, with supplemental bedding plants added in the 1950s. The terrace beds featured colorful seasonal displays of spring tulips and pansies, summer annuals, and fall chrysanthemums.

Longwood hired noted California landscape architect Thomas (Tommy) Church as a consultant in 1971. His tasks included redefining the garden areas surrounding the Open Air Theatre to improve guest circulation. Part of that redefinition was designing the Theatre Garden to replace the Terrace Garden. The shape and layout of the new garden was completely different from the multi-level Terrace Garden, and showed influences of Church’s southern California style.

The open, geometric design allows ample room for meandering through the planting beds on a summer afternoon or during the intermission of an evening Open Air Theatre performance. The initial low-maintenance Mediterranean plantings included hardy Camellia japonica, Sempervivum, stonecrop, yucca, and thyme.

Longwood excavated and replaced the Theatre Garden’s soil in 2014 to make it more of a scree garden, or a garden that includes a top layer of gravel and fast-draining soil. The gravel helps to conserve moisture and provides a neutral canvas to show off the colorful plantings … all the better for the drought-tolerant plants of the Theatre Garden to “sing another song” in the all too brief glory days of summer.