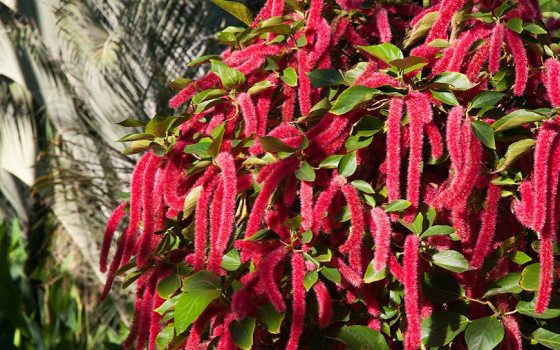 Summer is a wonderful time in our Conservatory for those plants that thrive on heat and humidity, which we have in spades in southeastern Pennsylvania. One such plant, a Longwood favorite to display this time of year, is the rather whimsical-looking chenille plant (Acalypha hispida). Chenille plant is native to tropical Papua New Guinea, and according to our plant records it has been grown at Longwood since at least 1957. This hot weather-loving, prolific flowering plant is a real attention-getter thanks to its “soft caterpillar-like floral structure and strong color,” as described by our Associate Director, Display Design Jim Sutton. Right now, the chenille plant is adorning our Conservatory in the form of 25 beautiful baskets … 18 suspended above the lush green lawns of the Orangery, and an additional seven baskets high above the Patio of Oranges in the East Conservatory. We thought it would be fun to step you through how these beauties arrived at their now-onstage moment, and the many steps it took to get them here on display.

This summer’s chenille plants’ story begins in fall 2019 when last year’s chenille plant baskets were removed from display to make room for the colorful plants of autumn’s Chrysanthemum Festival. At that time, we kept some of the plants as stock plants from which our growers could take cuttings for this year’s baskets, currently on display. Longwood’s Production Manager Jon Webb is responsible for taking our artistic display designs and translating them into numbers and dates on a crop list—including how many plants we’ll need and when we need to start growing them. Last year, he calculated that we would need 18 plants per basket for our display of 25 total chenille plant baskets this summer, plus a few extra to cover losses. In fall 2019, Senior Grower Kristen Fowler took Jon’s numbers and saved 10 5-gallon stock pots, as well as some plants in smaller pots and liner trays from the 2019 display from which to take cuttings.

Kristen pinched the stock plants throughout the winter to encourage branching and new shoots. “Acalypha do not vigorously grow in the winter, so every time I would pinch the stock plants, I would stick those cuttings in a tray with our propagation mix and put them in mist to be rooted,” shares Kristen. “I didn’t want to waste any cuttings since my crop number was so significant.” She was also vigilant in removing any flowers that would appear: “If it’s flowering, it is much less likely and more difficult to root. Vegetative growth is what I need. Stock plants are some of the only plants at Longwood that we do not want to flower.” She took the cuttings near the end of March 2020 for the baskets in the Orangery and grew them until they were well-rooted.

That’s where Grower Michelle Hagerty took over. She potted the rooted cuttings into 4-inch pots in late April and started planting them in baskets in mid- to late May, once they were well-rooted all the way to the side of the pots. For each 18-inch basket, she needs a frame, a hanger, sphagnum moss, soil, 18 plants, and an empty 6-inch pot for a watering reservoir in the center of the basket (to make sure the water spreads equally through the basket). She has a map of where to place the plants in the basket frame for the best display. “To make a basket you start by soaking the moss and essentially make a moss liner as you build the basket,” shares Michelle. “I line the frame up to the first slot that the plants need to go through with moss and fill in with soil, then the plants, then line with moss, then plants again, until you've completed the basket.” This part of the process is labor-intensive, and usually takes three to four people for assembly. The baskets remain in the greenhouse until night temperatures are in the high 50s. At that point, they are then are moved outside to continue their growth until they are ready for display.

Even with the chenille plants’ move outdoors, they still need regular attention. In addition to watering and fertilizing, the chenille plants need multiple pinches throughout their growing cycle. We also remove the flowers to encourage vegetative growth and stop pinching and removing flowers about four to six weeks before we estimate they will go on display. This year, the targeted display date on the crop list for the Orangery baskets was August 31 … but horticulture can never be an exact science, especially when it comes to environmental conditions. Therefore, the baskets in the Orangery went up about a week early because the previous begonia baskets were ready to be taken down.

East Conservatory Manager Karl Gercens remembers being wowed by a chenille plant hanging basket in the Conservatory’s North Passage on a 1996 visit to Longwood, and his enthusiasm for them has not waned: “This is a plant that inspires the imagination of all who see it,” shares Karl. “Are those some kind of animal tail, are they pieces of thick yarn or could they be Twizzlers on a plant?”

Since about 2010, the East Conservatory team has regularly displayed and cared for several forms of chenille plant, including the hangings baskets, standards (in which the plant is trained into a tall, lollipop-like form with a straight woody stem), and bedding plants. This year, when the production team handed off the baskets to Karl and his team, they became responsible for keeping them happy. As Karl puts it: “If you’re sweating, then Acalypha is smiling.”

Come see these beauties in person … and smile along with us at their vibrancy, their texture, and their wow factor.