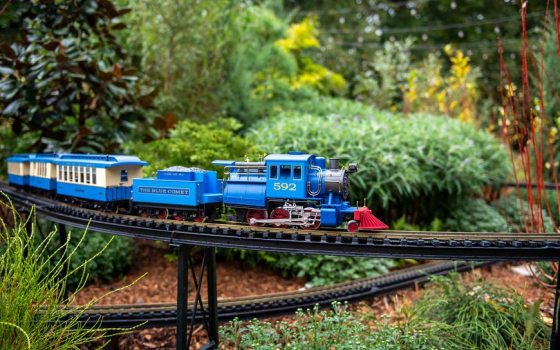 The return of Autumn’s Colors marks the 20th anniversary of our whimsical, wonderful Garden Railway … a perfectly fanciful blend of horticulture, engineering, and lighthearted fun that holds a special place in the hearts of many. Each fall, a multi-departmental team made up of members of our Horticulture, Facilities, and Guest Services departments together achieve the not-so-small-feat of creating this multi-level world in miniature, which shines throughout our Autumn’s Colors and A Longwood Christmas seasons. What starts as a blank slate of land just east of our Beer Garden becomes a textural, detailed display showcasing a varied collection of steam and diesel locomotives—as well as the ever-popular Thomas the Tank Engine and friends—that beckons fans of all ages. Beyond the magic of the display itself, the Garden Railway installation is a well-orchestrated symphony of talent and enthusiasm, and a project the team delights in each and every year.

The annual Garden Railway project begins with a detailed project plan and timeline, with the Horticulture team overseeing the installation. This year, installation began on September 14, a mere two weeks before the Garden Railway’s October 1 unveiling.

Installation begins with our Horticulture team and carpenters leveling the lot and then mulching the entire area. Longwood carpenters and electricians put in the infrastructure and run the necessary wires. The railway’s four tracks are all elevated two to five feet off the ground and must be supported by trusses and wood planks staked into the ground. After our carpenters install this primary support, they then place heavy iron rails—mirroring the configuration of the tracks—on top of the primary support.

Our electricians run the conduits and controls to the nearby Garden Railway tent, as the tracks are run by electricity. Transformers, receivers, and a controller (similar to a remote control for your television that controls the speed and direction of each of the trains) support the running of the railway.

Once the infrastructure is in place, Horticulture takes several days to adorn the display with a variety of foliage, flowering plants, and woody plants, transforming the worksite into our amazing Garden Railway. Among the display you’ll find such beauties as the sunny Chrysanthemum ‘Sheffield Yellow’, textural Magnolia grandiflora ‘Southern Charm’ Teddy Bear®, and vibrant Salvia leucantha purple-flowered form (Mexican bush sage).

Our team of six railway engineers place the approximate 500 feet of track, complete with tresses and bridges crafted in-house, on top of the rails in their four separate configurations. The team takes two to three days to lay out the track on the supports and secure them while attaching the necessary wires. They then unpack the railroad equipment, make any needed repairs, and clean and lubricate all of the locomotives and cars to get them ready for the season, making time for plenty of testing.

Our train collection currently totals 31 locomotives, steam engines, diesel engines, and specialty engines, as well as a complete line of Thomas the Tank Engine and his friends James, Percy, Emily, and Toby. Guest Engagement Lead Mark Kosteski, who serves as the lead engineer for the Garden Railway, relishes in the effect Thomas has on many of our guests: “The sound of preschoolers running up to the display shouting ‘Thomas! Thomas!’ is the cutest thing ever. The fact that 20-something-year-olds excitedly do the same thing makes the Garden Railway beyond special. It’s a place of connection, of memories for all.”

Thomas always runs on track number one, nearest the walkway so children can see him as soon as possible … and we have several Thomas trains in our collection to help make sure he’s visible at all times. “We have to be careful when changing out one Thomas for another,” chuckles Kosteski. “The kids think the train is the Thomas, and we don’t want them to know we have more than one.”

Longwood Senior Public Safety Officer Charlie Palmer, one of the railway’s six engineers, shares that each engineer has their favorite engines to run, including his, the Pennsylvania locomotive, which also happens to be one of Kosteski’s favorites. “The Pennsylvania silver commuter train that we put on track number four goes around the entire Garden Railway. The children love to follow this train, especially at night when they are able to see the people sitting inside the lit passenger cars,” Kosteski shares. “We also have specialty engines that include ladybug and jack-o-lantern designs, which are a pleasant sight when seen scooting through the plants in the display.”

Each year, we add to our stock of locomotives and railcars, including three new engines making their debut this fall: a Kansas City Southern diesel locomotive and The Blue Comet and Pennsylvania camelback steam engines. All of our locomotives are G-scale, representing the largest made specifically for garden railways.

Once the Garden Railway opens, the work (nor the fun) doesn’t stop there. Each day brings a complete setup and breakdown operations process for the engineer on duty. In the morning, before the Gardens open to guests, the engineer on duty cleans and lubricates the engines used the night before, as well as cleans all four tracks using a combination of hand tools and a “cleaning car” custom-made by a previous engineer that’s sprayed with cleaning fluid and attached to a locomotive before it’s sent around the tracks. The morning cleaning helps rid the display of carbon buildup.

Every so often, the engineer has to de-ice the tracks before cleaning depending on the weather. The Thomas the Tank Engine and friends trains, as they’re encased in plastic, can be run in rain and light snow, while the other locomotives must be set inside, as they are too vulnerable to such weather. If we’re met with an especially tricky weather day, every effort will be made to at least place Thomas and his friends on the tracks in a stationary position.

Perhaps the most exciting part of the morning setup is the fact that the engineer on duty can select which engines to run that day. That set of engines is swapped out for a new set for the evening shift … and many guests come back to the Garden Railway after that next shift change (which takes place at 4 pm) to see what new engines await the evening display. At the end of the evening shift, the engineer on duty must bring the engines inside to our heated railway tent to keep them out of freezing temperatures and running their best. Even with such meticulous care, our engines can sometimes derail (and then be righted by the engineer on duty) or even have their own plan … requiring a bit of Longwood magic to get them back on track. “Thomas can have a mind of his own,” shares Palmer. “On one of the occasions that Thomas derailed, I stopped the train, re-railed him, and turned the power back on. Moments later, a young guest asked me if I knew what I was doing. I assured him I did. He then pointed to Thomas, who was running in reverse, and said ‘I think not’.”

The Garden Railway holds a special place in the hearts of our guests and our staff. “There is nothing more satisfying to see than the pure joy and excitement the trains bring to the children that visit each year,” shares Kosteski. “We get to know the children that come back over and over, day by day and through the years. Train enthusiasts come by and talk with the engineers on some of the finer points regarding the tracks, mechanical and electrical components, and train sets. It’s a great opportunity to engage with our guests and we love doing so.”

To Palmer, the Garden Railway is “a chance to showcase the many talents used to make this amazing display. The entire scene is a thing of beauty and the combination of plants, trees, and trains blended together is always a sight to behold. And as the seasons change, so does the scenery.”

We look forward to many, many more seasons with the Garden Railway … and making many, many new memories with you.