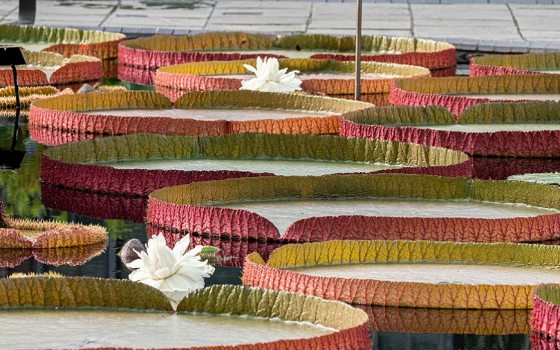 Longwood Reimagined: A New Garden Experience goes far beyond opening new worlds for us—it also challenges us to rethink the way in which we grow and display mainstays of our renowned horticulture collection, as well as encourages us to embark on new collaborative opportunities to enable such growth.

As part of Longwood Reimagined, we will soon be embarking on an enhancement and renewal of our famed Waterlily Court, refreshing this beloved aquatic garden to redefine it as an outdoor room and further strengthening it as a central destination amid our new West Conservatory and Bonsai Courtyard, our relocated Cascade Garden, and our existing East and Main Conservatories. As a result, our Waterlily Court will be unavailable to guests from the fall of 2021 until its summer 2024 reopening … but the waterlilies for which this iconic space is known—particularly our famed Victoria water-platters—must have a space in which they may grow and thrive while awaiting their newly refreshed home. Enter a new collaborative agreement between Longwood and Naples Botanical Garden in Florida to support the growth and future of Victoria throughout the Longwood Reimagined project.

This agreement focuses on continuing the seed production of Victoria amazonica, Victoria cruziana, and their resulting Victoria ‘Longwood Hybrid’ while the Waterlily Court is undergoing revitalization. Under the leadership of Longwood Senior Horticulturist Tim Jennings, Naples Botanical Garden will trial Victoria seed production during the 2021 growing season and then continue production during the 2022 and 2023 growing seasons—a vital initiative to help Longwood maintain a source of viable Victoria seed while the space normally used for its growth and display remains unavailable. While we regularly ship Victoria seed to other institutions to grow for their own displays, this serves as the first time we’ve entered an agreement with another institution to grow Victoria seed for us.

Longwood began growing V. amazonica, native to Guyana and the Amazon River basin, and V. cruziana, native to the Parana River in northern Argentina, Paraguay, and Bolivia, in the 1950s. A cross between the two, called ‘Longwood Hybrid’, was developed here by Patrick Nutt in 1960, and first flowered in 1961. We’ve repeated this cross every summer since 1960, with new plants started from seed indoors in mid-January to go on display for public viewing starting in late May. Beloved for its flower, ornamental attributes, and massive size in which a single leaf can reach 8 feet in diameter, Victoria ‘Longwood Hybrid’ has long been a favorite among guests—not only of Longwood but also of other public gardens throughout the world.

For decades, to support capacity building and Victoria conservation, and to share our intellectual capital with our peers, Longwood has distributed surplus seed to a global community of public gardens from the Missouri Botanical Garden to the Royal Botanic Gardens, Kew. Those garden recipients have not only germinated, displayed, and interpreted these awe-inspiring plants … but have helped share the beauty of Victoria ‘Longwood Hybrid’ with a global community.

Fast forward to present times. To kick off our collaboration with Naples Botanical Garden, in January 2021 Longwood sowed seed of V. amazonica and V. cruziana in preparation for an April 2021 shipment of six 4-inch potted young plants—three each of V. amazonica and V. cruziana to serve as seed parents—to Naples, as well as gathered and sent cultural information on Victoria soil, fertilization, and general care known to be effective at Longwood. Throughout the trial and growing seasons, Naples Botanical Garden horticulturists will support the growth of the young parent plants, pollinate the flowers of V. amazonica and V. cruziana, and then harvest the resulting seeds, temporarily storing them until they’re transported back to Longwood for long-term storage, as seeds typically last for two to three years.

Throughout these efforts, Longwood and Naples will hold regular virtual meetings to share the progress and health of the plants. Longwood staff will visit Naples Botanical Garden at times of critical Victoria lifecycle steps—such as initial planting and pollination—to support Naples Botanical Garden staff. In turn we will host Naples Botanical Garden horticulturists here at Longwood for training and learning experiences, sharing our expertise and learning from our peers in return. The first Victoria seed harvesting efforts at Naples will take place in either October or November of 2021, and the first seed collected at Naples will be shipped back to Longwood shortly thereafter. Based on the number of seeds received at Longwood, any extra seeds will be shared with other institutions. While a single water-platter plant can produce hundreds of seeds, this partnership with Naples Botanical Garden—and all it means for Longwood and the continued growth of Victoria the world over—is simply beyond measure.