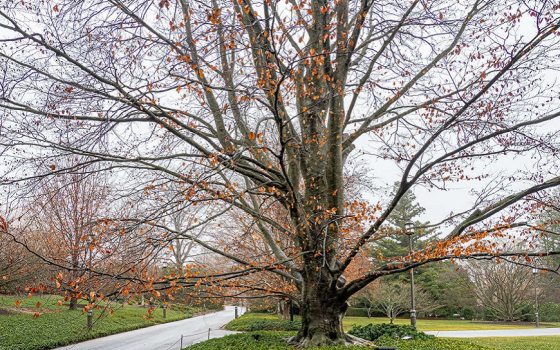 A Goodbye, A Beginning

Here at Longwood, our trees are like family. They’re the reason Longwood exists—the backbone of our Gardens. Using comprehensive and cutting-edge methods, we approach their health and care with the utmost respect and expertise … and when we, from time to time, must make the difficult decision that one of our trees must be removed, it’s a decision that weighs heavy on our hearts. We recently found ourselves in that unfortunate position when we had to remove one of our cherished copper beeches (Fagus sylvatica f. purpurea) that had stood tall at the northeast corner of our Cow Lot, along Beech Allée, since 1958. With the removal of this beloved tree, however, comes a new beginning, in the form of a replacement copper beech from our collection, planted in its place and ready for many beautiful days—and memories—ahead.

We arrived at the difficult decision to remove the copper beech after the tree had been in decline for more than eight years due to various stressors. A multitude of issues can suppress healthy, mature copper beeches which include climate stress, Phytophthora root rot, Phytophthora bleeding canker, and ambrosia beetles. We believe that our tree was nearing maturity, already stressed by climate change, when Phytophthora found its way into the tree via an old pruning cut or a potential bark damage scar near soil level. This fungal pathogen causes severe sapwood decay and can easily be spread upwards through the vascular tissue by boring ambrosia beetles or carpenter ants looking for decayed wood. To extend its life, we provided routine monitoring and treatments, including a cutting-edge grafting technique in an attempt to close the large wounds. Despite our very best efforts, however, and in the interest of safety and for the health of the remaining copper beeches that line the allée, we had to make the difficult decision to remove the tree, with the removal occurring in mid-January.

Two weeks following the removal, we proudly brought a familiar family member—in the form of a mature 25-foot-tall cooper beech of the same type from our property—to its new home, planted in the same place as our previous copper beech. Weighing in at approximately 20,000 pounds, the new copper beech’s root ball measures more than 9 feet wide and 4 feet deep. Previous to its planting, we removed the soil in the location and fresh, clean soil was brought in to ensure that it would not be at heightened risk to the same Phytophthora fungus as its predecessor.

With our replacement copper beech now cozy in its new home, we look forward to many, many years to come with its beauty as the backdrop of many of your photos, your memories, your strolls in the Gardens … and we remember its predecessor with fondness and appreciation for the many years of enjoyment it brought to us.