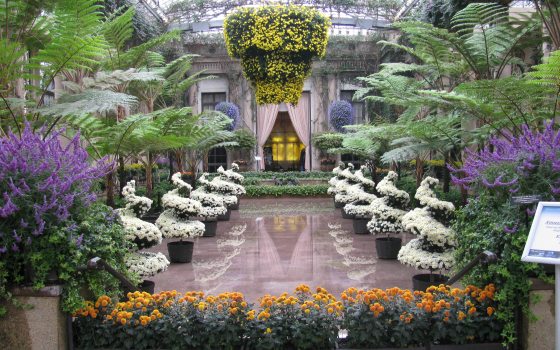 A Culture of Chrysanthemums

The tradition of growing chrysanthemums indoors began at Longwood Gardens when Pierre S. du Pont first opened the doors to his Conservatory in 1921. The display and cultivation of chrysanthemums, however, is grounded in cultural traditions that extend back much further than the story of our Gardens. First cultivated in China as far back as the 15th century BC, the grafting and training of chrysanthemums into artful forms has become a well-respected technique that is honored annually during festivals in both China and Japan.

Inspired by these traditions of Asian culture, the first large-scale chrysanthemum display at Longwood took place in 1924 and highlighted mainly exhibition-type mums. It was in 1981 that we officially named the display "Chrysanthemum Festival," and today, the Festival has grown into our most intricate and labor-intensive display of horticulture. We proudly showcase the largest, and arguably the best, collection of chrysanthemum forms in North America. The variety and extravagance of the show as it is today, however, is largely the result of a Longwood and United States Department of Agriculture (USDA) co-sponsored trip to Japan in 1956. The team returned with more than 118 new chrysanthemum cultivars for Longwood’s collection, drastically improving the diversity of our collection. This enabled us to present more imaginative displays, including specialty forms such as baskets, columns, curtains, chandeliers, shields, arches, and spirals.

In 1994 we began growing the Thousand Bloom form, an ancient technique in which a single plant is manipulated to produce the maximum number of flowers. Cultivating a Thousand Bloom Mum requires patience, skill, and discipline, so we knew this would be quite the challenge.

This year, 230,000 chrysanthemum blooms fill our 4-acre Conservatory in forms of cascades, shields, spirals, pagodas, and our most impressive Thousand Bloom Mum yet, featuring 1,515 blooms. More than 12 months of preparation goes into Chrysanthemum Festival, and we strive to make each year's display even more remarkable than the last. Hand-crafted and highly-cultivated, this display represents the best of our Gardens—bringing horticulture, design, preservation, and a dedication to excellence together into a stunningly beautiful display.