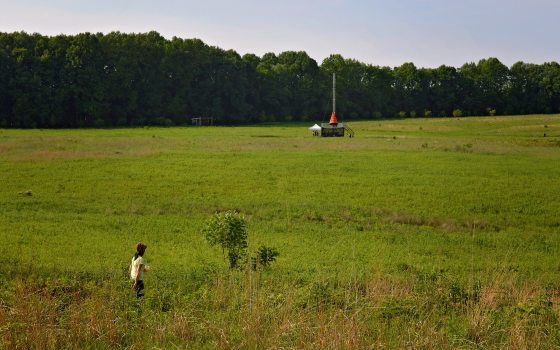 Playwrights Get Lost in the Meadow

Lost in the Meadow . . . those four words can conjure up very different meanings. Maybe you actually got lost in Longwood’s Meadow Garden, or perhaps another meadow. Maybe that phrase has metaphoric meaning, that you lose yourself while surrounded by beauty and nature. Whatever the case, Lost in the Meadow is the title of a new play being developed right before our very eyes—in our very own Meadow Garden.

In the spring of 2011, a year after Longwood Gardens and People’s Light & Theatre agreed to partner to create a new play, teams of playwrights and set designers gathered for an immersive weekend, seeking to absorb everything they could about our Gardens. The playwrights were here to develop ideas for a new play inspired by Longwood. After concepts were developed, board members and staff representatives from both organizations heard the playwrights “pitch” their ideas. Out of those pitches, we decided to give one team the green light to start writing and designing. We were ready to proceed!

A few years later, on a warm June weekend, the director, playwright, and designer came together with the actors, stagehands, and Longwood staff members to “play” in the Meadow Garden, and work out the logistics of the production. “What in the world is going on out there?” asked many guests in the Meadow. “Not quite sure,” we replied.

New play development is an interesting animal. Some would say it’s like the development of the Thousand Bloom Chrysanthemum in that it requires determination and patience. Others would say it’s like the planning process of the Fountain Revitalization Project in that it starts with a grand idea and is followed by an intricate and lengthy planning process.

We have just the team to pull it off. Playwright Lisa D’Amour’s plays have been performed in theaters nationwide. Her play Detroit was a finalist for the 2011 Pulitzer Prize in Drama. She is the recipient of the 2008 Alpert Award for the Arts in theater, the 2011 Steinberg Playwright Award, and is a recipient of the 2013 Doris Duke Performing Artist Award. Director Katie Pearl has also worked nationally on numerous productions, many in partnership with Lisa D’Amour. Of their partnership, they say: “We have devised a body of work that is attentive to the performer/audience relationship . . . we want our audiences to feel like they are inside of an experience, rather than watching something happen ‘over there.’ When we make a show we create room for the audience to feel like they have slipped into the private headspace of a performer they are watching—an intimate, associative, surprising place.”

Heading up the design of the set and the physical nature of the production is Mimi Lien. Mimi has worked with numerous playwrights and theaters nationwide and has a special affinity for creating site-specific elements that take audiences to a new world.

Back to that weekend in June and the matter of our new play . . . According to the creative team, “Lost in the Meadow will explore the quest of the tiny human being to understand the big picture.” During the team’s own 4-year-long quest, our Meadow Garden has undergone quite a transformation. It has been two years since they last saw the Garden in person, and nothing really prepared them for the changes in the 86-acre space. The scope of the Meadow and its awe-inspiring beauty had taken on a whole new life, and the team is excited by the possibilities for their play.

Now it was just a matter of figuring out where the action would take place, where the audience would be located, how the audience would hear the dialogue and music, and of course, how to install a 50-foot tower while at the same time protecting the landscape for all to enjoy. This is all in a day’s work at Longwood Gardens, where innovation and beauty are always the focus. More trials will occur in the coming months, with performances set for September 2015. Stay tuned . . .