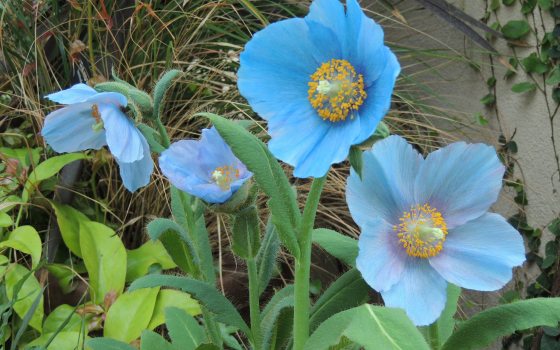 The Allure of Blue

The ever-evolving, world-class Conservatory displays at Longwood Gardens are a major attraction throughout the seasons, but every March, a special botanical and horticultural rarity goes on display that creates a palpable excitement and fervor among our guests—the fabled Himalayan blue-poppies (Meconopsis ‘Lingholm’). The word blue only begins to describe the coloration of the flowers—they are perhaps the purest blue of any flowers yet known, a mixture of azure and cerulean that is unparalleled in the plant kingdom. All who witness them are struck by an insatiable desire to grow them, yet they are rarely encountered in the Eastern US. These denizens of high Himalayan mountain regions have precise requirements for successful growth and Longwood Gardens is one of the few places in the Eastern US where these rarities can be seen. They are poster children for a horticultural pursuit from which no plant group is immune—the quest for blue flowers. There are other blue-flowered plants, but why are they so rarely encountered and why are they so alluring?

What makes blue the most sought-after and highly prized flower color? Perhaps it is rarity itself. Blue is rare in nature—biologists have estimated that fewer than 10% of flowering plants have blue flowers and even fewer have truly blue leaves. This is because the blue coloration of flowers is something of an anomaly since blue pigments in plants do not actually exist. Instead the coloration is due to several factors: varying concentrations of different color pigments, molecules and ions, modifications to pigment-regulating genes, pH shifts, and the complex alterations of cell structures that affect the reflection of light and human perception of color. Plants have gone to great lengths to produce blue coloration, and their rarity is a direct reflection of the difficult path in getting there.

Horticulturists also find blue flowers to be elusive. Many blue-flowered plants are difficult horticultural subjects—exacting and rigid in their requirements for optimal growth. The blue-poppies are the epitome of this statement but are one among many! Plectranthus thyrsoideus is a staple of Longwood Christmas displays, used primarily for its spikes of sapphire-blue flowers. Part of the reason this plant is used so much at Christmas is because it will only flower during the shortest days of the year. Researchers at Longwood have sought to alter its flowering time using different day length and cultural treatments, but it has stubbornly resisted. Add to this its brittle stems and total failure to set seeds, and it becomes clear why this plant isn’t more widely cultivated.

Another similar example are the electric-blue Longwood hybrid cineraria (Pericallis) that adorn the Conservatory in late winter. In the 1990s, these plants were considered so difficult to grow that commercial growers largely stopped producing them. In order to keep them going, Longwood Gardens had to conserve inbred commercial seed strains but recognized that further breeding was necessary to keep them vigorous and healthy. This resulted in a plant exploration trip by Longwood staff to the Canary Islands, where Pericallis occurs naturally, in order to collect progenitor species that could be grown and used to reintroduce vigor into inbred commercial seed strains through conventional plant breeding. The result was successful, but even now Pericallis has to be maintained in tissue culture where optimal growing conditions and freedom from pests and diseases can be assured. Furthermore, the plants are routinely bred to ensure a constant supply of seedlings for display purposes.

A more familiar example of blue-flowered plants being finicky is the well-known hydrangea (Hydrangea macrophylla). Although not difficult to grow, obtaining truly blue flowers can be challenging and frustrating. The general rule is that acidic soils produce blue flowers and basic, or alkaline, soils produce pink flowers, but the mechanism for changing flower color is more complex than that. The availability of aluminum in the soil is the most important factor in influencing the color of hydrangeas. Aluminum is more available in acidic soils, and less so in alkaline soils (except at very high pH levels, which result in blue flowers, but also plant death), hence the traditional stories about manipulating soil pH to successfully influence flower coloration. In addition to changing soil pH, amending the soil with additives high in aluminum—such as coffee grounds and citrus peels—can also influence flower color. The fickle nature of hydrangea flowers is symptomatic of many other supposedly blue-flowered plants.

Like any other color, blue exists as a continuum—a scale in which many reputedly blue-flowered species contain varying amounts of other colors, resulting in a wide array of different flowers to be called blue, when in fact they really are not. Erroneous use of the word blue is hopelessly perpetuated in horticulture. Violet, lavender, lilac, and purple-flowered plants are often referred to as blue—but not truly blue. Plant breeders have spent lifetimes trying to obtain truly blue-flowered daylilies, orchids, and roses. In 1840, horticultural societies of Britain and Belgium offered a 500,000-franc reward to anyone who could breed a truly blue rose. No one ever successfully claimed the prize! In 1964, the “blue” rose, Rosa ‘Blue Moon’ was considered a breeding breakthrough when introduced; however, it was ultimately disappointing because the color, although unique at the time, was not blue. The quest for a truly blue rose has continued and more recently was the subject of cutting edge genetic engineering. Researchers in Japan have created a blue rose in the laboratory by silencing certain genes and manufacturing and inserting new ones. It has flowered in Japan, and while it is clearly a color breakthrough in roses and is approaching blue, it isn’t quite there yet. As long as there is fascination in obtaining the unobtainable, the endeavor to create truly blue-flowered forms of favorite garden plants will continue indefinitely.

While many supposedly blue flowers trend toward purple or red, there are some plants that boast a mixture of blue and green, resulting in some of the most exotically colored flowers in the world. The pendulous chains of turquoise-blue flowers of the jade-vine (Strongylodon macrobotrys) always draw attention when this plant blooms in the Banana House at Longwood Gardens. Other similarly colored plants such as Ecbolium viride, Lachenalia viridiflora, and Ixia viridiflora are also sometimes displayed at Longwood Gardens. This color is even rarer than true blue!

Although many blue-flowered plants can be difficult garden subjects, some blue-flowered plants are easy-to-grow perennials for the home landscape. The powder-blue flowers of forget-me-not (Myosotis spp.) and bugloss (Brunnera macrophylla) are easily grown in shady garden areas. The Siberian squill (Scilla siberica), along with many related species, is also easy to grow. Many gentian species have blue flowers, and although some are difficult to grow, others such as Gentiana asclepiadea and G. ‘True Blue’ readily thrive in the right conditions.

It is clear that many factors drive the allure of blue flowers. In recognition of the zest for blue flowers, we are exhibiting our first-ever Winter Blues Festival through March 25, 2018. Please join us to celebrate, appreciate, and marvel at one of nature’s rarest phenomena.