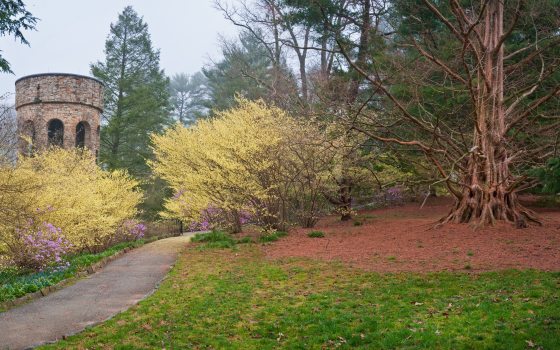 A Plantsman’s Journey Through the Hillside Garden

Spring gardening has always been very important to me as a horticulturist. There is no better indicator that winter has finally come to an end than seeing a garden come to life, filled with detail and vibrant color.

The Hillside Garden is a magical place at any time of year, offering guests a tranquil retreat brimming with diverse floral displays, a plethora of foliage and textures, and quiet places to sit and reflect. But as spring sets in, the Hillside truly becomes a plant-lover’s paradise.

The goal in the Hillside Garden has always been to create a garden that offers something for everyone—from providing ideas and inspiration for home gardeners to facilitating plant and garden education. It’s also a place where hardened plant geeks can admire rare or unusual plants in a cultivated setting. In this post I will be sharing some of the plants that inspire me and bring out my inner plant nerd, and some plants that are the workhorses of the spring garden that I could never be without.

Snowdrops are a spring bulb that, in my opinion, no garden should ever be without. They grow easily in most conditions and increase by division and seed. They naturalize well in lawns and garden beds, but do so politely without cause for invasive concern. The giant snowdrop, Galanthus elwesii, blooms first in the Hillside Garden, generally in the beginning of March. We have planted several thousand in the past few years and home gardeners can easily find them in bulb catalogues. Far more numerous in our landscape is Galanthus nivalis, which blooms slightly later in March and is smaller and more delicate. The image above showcases a particularly nice form of Galanthus nivalis adjacent to the Chimes Tower.

Longwood’s geophyte plantings are a staple of the spring experience in our garden. Every spring, the Hillside is wreathed in a patchwork of purples of the early Crocus tommosinianus, which gives way to blues of Scilla and Chionodoxa, and then the yellows of hundreds of thousands of 'Tete-a-tete' daffodils. As guests explore the paths of the Hillside Garden, the geophyte display bleeds into the garden beds themselves, blurring the lines between the Hillside and its surrounding spaces. Several million early spring bulbs have been planted in lawn areas, providing interest from February into April—only to come back stronger each year as these bulbs divide and set seeds.

Two of my favorite early spring plants are Adonis amurensis (background) and Leucojum vernum (foreground). In the past few years we have been working to increase the presence of both of these species in the Hillside Garden. Adonis is among the first non-bulbs to begin flowering in spring—opening with the sun to show off its substantial brilliant yellow flowers. They are easy growers in moist, well-drained soil and quickly bulk up to specimen-sized plants. The ferny foliage is an added bonus, lending its unique texture to the garden. They are quick to go dormant when the temperatures rise and can be planted amongst other perennials that will emerge just as the Adonis is finishing its aboveground phase of growth for the year. Leucojum vernum is closely related to Leucojum aestivum, or summer snowflake, but is much more difficult to come by, smaller in stature, and much earlier to bloom. They come into full flower slightly after the later flowering snowdrops and are able to bridge the gap until the rest of the garden comes to life.

Hellebores are another plant that I could never garden without. They are so valuable to a spring garden—providing height and stature and a broad spectrum of flower colors and forms. There are several different kinds of hellebores in the Hillside Garden but none are quite as spectacular as the sweep of hundreds, if not thousands, of Hellebores x hybridus that come in pastel shades of yellows, pinks, reds, and whites, all with their own gorgeous detailing that becomes apparent when the flowers are more closely examined. They grow happily in shady places and are remarkably easy to care for and maintain.

I have fallen in love with cyclamen over the past few years. There are species that offer something for every season, and all of them, without exception, provide intricately patterned leaves and flowers that seem to appear from nowhere and vary in color from white to deep purple and sometimes even red. By far, our most populous species in the Hillside is Cyclamen hederifolium, which flower in October and November but their silver and green patterned leaves live on through the spring. Other less common species such as C. pseudoibericum, C. rhodium, C. alpinum, and C. coum begin their floral displays in spring—sometimes early enough that they bloom in concert with snowdrops. For cyclamen, a well-drained soil is critical and some shade is welcome. When well grown they will quickly multiply by seed, creating a breathtaking display of foliage and flowers.

Trilliums are some of my favorite garden plants, and it has been a goal of mine to showcase the diversity of this group in the Hillside Garden. They are remarkably easy to grow in deep, moist, well-drained soil that is high in organic matter, and plants are becoming more common in the nursery trade. We have several different species in the Hillside, including Trillium decipiens, whose beautifully patterned foliage emerges from the ground in the beginning of March, as well as dozens of Trillium sulcatum, which will make their display debut in mid-May. All species are worth growing and I truly have never met a trillium that I did not like. Trilliums have a close cousin that is known by the name Paris. Paris as a genus occurs primarily in China, although one of the easiest to grow is Paris quadrifolia, which originates in Europe. They are fairly uncommon in gardens and not all Paris are practical in our climate as many require cooler summers than we can provide. There are, however, several garden-worthy species that are well worth searching out.

Arisaema add something incredibly unique and special to the garden. Their foliage can be bold and tropical in appearance. Some species sport flashy silvery variegation while their flowers can be downright otherworldly. Whether you find them bizarre or beautiful or something in between, they all have something to offer in the garden. North America has several native species of Arisaema while Asia boasts more than one hundred. Some are fussy with soil moisture, summer temperatues, or winter cold but many others are tremendously garden-worthy and easy to grow. I could never have too many Arisaema in the garden.

Epimedium are underused and underappreciated for a group of plants that have so much to offer, especially for gardeners who find beauty in the details. These herbaceous members of the barberry family have some of the most intricate and colorful flowers in the garden. Many begin blooming at the end of April into May and come in an awesome variety of colors. The foliage can be even more spectacular, sometimes emerging blood red or purple, depending on the plant, and filling out into incredible textures, making for one of the most fascinating companion plants that a shade garden could ever ask for. One of their real values is their ability to tolerate dry shade, which is always the bane of any gardener's existence.

Cypripedium are among the most beautiful flowering plants in the world and can be a very welcome addition to the spring garden. They have a bad reputation for being hard to grow, but I have found them to be quite easy in bright shade and moist well-drained soil. We have several species growing happily in the Hillside Garden and all begin their bloom cycle in May. Cypripedium pubescens (sometimes referred to as Cypripedium parviflorum var. pubescens) and Cypripedium kentuckiense are both native to the eastern United States and are surprisingly tough and long-lived garden plants. When purchasing Cypripedium some care has to be taken to buy from a reputable source that is not selling plants collected from the wild. These wild-collected plants tend not to thrive, and collectors put unnecessary pressure on wild populations that are in some cases non-renewable. There are many hybrids that perform marvelously in garden conditions that are worth growing as well.

The Hillside Garden boasts an unusual array of tree and herbaceous peonies. Many begin to bloom in May but some of the woodland and species peonies are in bloom as early as mid-April. Colors vary from a clean buttery yellow to white, pink and red. All of these plants are very long lived and an old specimen can be incredibly rewarding—putting on a show-stopping display when it comes into bloom. For some of the woodland species like Paeonia obovata, a garden plant I could never be without, the display doesn’t end once the last petals have fallen. In autumn, seed capsules open to reveal metallic blue/black seeds surrounded by brilliant red unfertilized seeds.