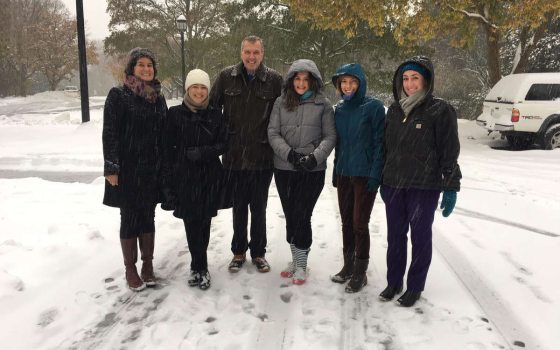 As Longwood received the first snow dusting of the season, the Longwood Fellows departed for Morris Arboretum for our third salon in a series held at culturally significant locations. For this salon, we focused on the concept of how creating financial endowments can provide consistency and reliability on an often bumpy financial road. In short—how to fund impressive new projects and pay the electric bills. In financial year 2018, Morris Arboretum received $4.7 million from more than 5,500 individual gifts and pledges, of which $1.6 million was for unrestricted use. While specific pledges establish lasting support for quintessential Arboretum offerings, unrestricted dollars can be spent on fundamental operational needs—the life-blood of any institution.

Paul W. Meyer, the F. Otto Haas Executive Director of the Morris Arboretum (an endowed position), and Director of Development Mira Zirgani welcomed us to lunch as we spotted robins darting among ever-growing snowflakes. Meyer and Zirgani gave us clear insight into the technicalities of endowment structuring and the importance of building a culture of philanthropy and recognition through meaningful staff and donor relationships. Zirgani, who leads nine developmental staff, spoke of the success of 70 distinct endowments that include support for internships, research, and renovation, and for the Arboretum’s current evergreen campaign to raise $36 million over three years.

The Arboretum’s strong staff and donor relationships speak to a level of trust strengthened over years of striving together towards accomplishing the Arboretum’s mission of education, research, outreach, and horticultural display. The Arboretum’s development team maintains clarity and drive on campaigns from capital projects and internships, where a gift might be restricted to a specific use, to a gift with broad remit in the annual operating budget or historic renovations funds. Reaching new audiences for such gifts might require instituting captivating storytelling about mission impact or simply communicating that charitable trust arrangements can mean more for both donor and recipient.

Meyer’s absolute effort has been to fundraise not only the dollars to build a project, but the funds to ensure longevity. And here’s what donors want to know—that giving to both the “now” of the build and the “how” of long-term success is what leads to mission accomplishment.

While the snow prevented a Fellows frolic on the Out on a Limb Tree Canopy Walk, or a stroll through the renovated Mercury Loggia, we scuffled through inches of powdery white snow as Meyer pointed out trees he had planted and grown from seed during his 42-year tenure. Some say there’s no greater gift to the future than trees: combine this with Meyer’s laser focus on stewarding dependable financial support for the Arboretum’s awe-inspiring specimens, and you have a match made at Morris Arboretum.