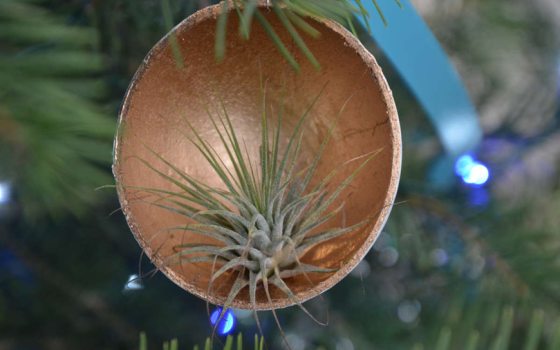 Tremendous Tillandsia: How to Care for These Gems

Tillandsia, often called air plants, are by nature captivating. They’re fun, visually interesting, smart … and they’re beautifully featured in our A Longwood Christmas display. From textural Tillandsia xerographica perched above the waterfall in our Cascade Garden, to tiny Tillandsia tectorum and Tillandsia ionatha tucked into wire and cup ornaments in our Silver Garden, Tillandsia are definitely having a Christmas moment. Thanks to their hardiness, they can also be beautifully featured in your own home year-round, given you provide them with a level of care worthy of these gems.

Tillandsia represents the largest genus of the equally amazing bromeliad family. Known as epiphytes—or plants that grow on other plants—Tillandsia live a soil-free life. They take the nutrients they need to survive from the air,  rainwater, and organic matter that builds up in their host plant. You can often find Tillandsia on a tree or cliff, and here at Longwood you can find the majority of Tillandsia year-round in our Silver Garden and along columns in our Cascade Garden. Tillandsia usneoides (Spanish-moss) can be found accenting displays in the Tropical Terrace and Orchid Display year-round.

One of the features that makes Tillandsia so remarkable is the fact that they absorb water and nutrients through specialized plant cells on their leaf surfaces called trichomes—not through their root system. Their roots are only used to attach to other surfaces or plants. Trichomes serve as a perfect example of the complexity of plant adaptation. Through their trichomes, Tillandsia have adapted to their native habitats of arid, yet humid North, Central, and South American locations, thriving through their unusual way of gathering nutrients.

In their native habitats, Tillandsia require high humidity, good air circulation, and lots of light. The same holds true for Tillandsia in the home. While Tillandsia are relatively low-maintenance houseplants, every plant needs TLC … and the care you give Tillandsia has to align with the features that make these plants so unique.

Like most other houseplants, Tillandsia prefer humidity levels of 70 to 100 percent; since they absorb moisture through their foliage, being in conditions with less humidity will force them to try to survive off of less than their required moisture. During the wintertime and when home heat is running, humidity inside our homes can drop down to less than 10 percent, so during this time of year it’s important to make sure Tillandsia have plenty of moisture. You can mist them when your home feels really dry or if the tips of the Tillandsia feel dry to your touch. You can also use a humidifier in the room in which your Tillandsia reside, or cluster them around other plants, from which they can pull moisture. Don’t worry, though … Tillandsia are not parasitic plants, so they won’t harm other plants from which they pull that moisture.

Tillandsia should be kept indoors for most of the year. During the summertime, you can let them get some fresh air outside. They’re a sub-tropical plant, so they’re not winter hardy, nor can they thrive if in an environment of less than about 45 degrees Fahrenheit. While inside, be sure they’re near the brightest window possible and be sure they get lots of room to breathe, as they rely on a good amount of air circulation to stay healthy. Along those same lines, while putting Tillandsia in a glass globe is certainly pretty, it’s not in the best interest of your plant’s health. Tillandsia look beautiful (and stay well cared for) when placed in an open container or carefully wired to another surface, such as we do here at Longwood.

Come see our tremendous Tillandsia for yourself during A Longwood Christmas … and then come back again to see them anytime in our Silver Garden, Tropical Terrace, and Cascade Garden. They’ll be here waiting in all their interesting, textural, beautiful glory.