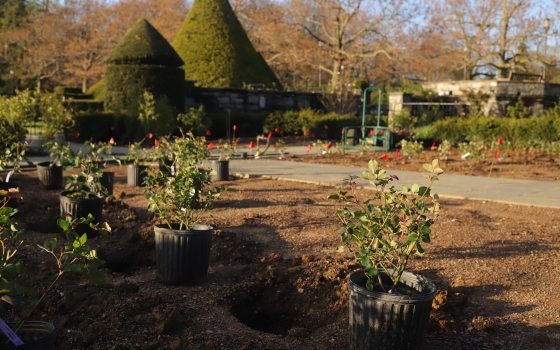 When you think of Longwood’s Rose Garden, you might picture beds of manicured rose bushes surrounded by flagstone walks and lawns of turf. You might recall spending a few moments strolling among the roses before continuing on into our Topiary Garden or our Main Fountain Garden. When you return to visit us again, we hope you’ll make the Rose Garden one of your first stops … there is something new to see! During our temporary closure, we took great steps forward with our new Rose Garden design and we can’t wait for you to see it. Showcasing a modern design approach to rose gardens while still celebrating its early 20th century tradition, our Rose Garden is evolving, and we are all excited about the shape it will take.

The formal Rose Garden was first planted by our founder, Pierre S. du Pont, in 1938. It was actually Longwood’s second rose garden; the first rose garden was planted in 1908 south of the Flower Garden Walk on the site of our Wisteria Garden. While not an avid collector of roses, Mr. du Pont used them throughout his gardens in beds, hedgerows, and trellises, from the Rose Arbor (planted with ‘American Pillar’ roses since before 1920) to the Rose House (opened in 1921 to provide roses for cutting). As one relative recalled, Mr. du Pont “didn't favor roses any more than something else,...[but] he undertook to grow them extremely well.”

When Mr. du Pont decided to plant a new rose garden in 1938, he planned a series of long beds, each planted with a single variety of rose, preferably long-blooming, free-flowering cultivars. Each bed would be 7 feet by 20 feet, densely planted with roses 15 inches apart in staggered rows. The beds would be surrounded by flagstone walks and turf lawns. Yew trees would be planted on either side of the walk to frame views into the adjacent Main Fountain Garden, drawing the viewer’s eye along the entire length of the Main Fountain Garden’s Pumphouse wall.

For help selecting roses, Mr. du Pont turned to Robert Pyle, president of the nearby Conard-Pyle Company, well-known for their production of high-quality rose hybrids. In a letter to Mr. Pyle, Mr. du Pont wrote that in each rose bed, he “would like one variety of rose only and a variety that will produce the maximum of bloom with plants that will cover the bed as well as such object can be achieved.” In choosing roses, he urged Mr. Pyle to “please be mindful that for these beds the length and quantity of blooming effect and the covering of the bed are the chief objects.” After careful consideration, and in consultation with the entire staff of Conard-Pyle, Mr. Pyle recommended four hybrid tea cultivars for the Rose Garden’s four main beds: ‘President Herbert Hoover’, ‘Margaret McGredy’, ‘Miss Rowena Thom’, and ‘Mrs. Pierre S. du Pont’. Climbing roses were suggested to cover the stone walls surrounding the Rose Garden; these were Rosa ‘Golden Glow’ R. ‘New Dawn’, R. ‘Souvenir de Claudius Denoyel’, R. ‘Madame Grégoire Staechelin’, R. ‘Dainty Bess’, R. ‘Doubloons’, and R. ‘Paul’s Scarlet Climber’.

The Rose Garden was planted in spring 1938. More than 800 roses were installed, including more than 250 plants each of Rosa ‘Miss Rowena Thom’ and R. ‘Mrs. Pierre S. du Pont’ and more than 150 plants each of R. ‘President Herbert Hoover’ and R. ‘Margaret McGredy’. Over the following years, Mr. du Pont no doubt edited the plantings, removing cultivars that were not performing and adding in promising new hybrids.  By the time of his death in 1954, R. ‘President Herbert Hoover’ and R. ‘Miss Rowena Thom’ were gone, replaced by R. ‘Charlotte Armstrong’, R. ‘Grand Queen Elizabeth’, and R. ‘Chrysler Imperial’, among others.

In the years since 1954, Longwood continued to maintain the Rose Garden as originally envisioned by Mr. du Pont: rectangular beds of single rose cultivars surrounded by paving and lawn. However, this design posed a number of challenges, both aesthetic and horticultural. For one, competing views into the Topiary Garden to the north, Main Fountain Garden to the west, and the Cow Lot to the east drew attention away from the Rose Garden. Second, the pair of yews that had framed the vista into the Main Fountain Garden was removed in the 1960s, weakening the east-west axis connection to the Main Fountain Garden.

As visitors entered the Rose Garden on its shorter north-south axis, they were pulled quickly into the Topiary Garden, often spending no more than a few moments in the Rose Garden. Further, the Rose Garden’s simple plant palette and lack of diversity gave visitors little to see in winter.

In 2019, Longwood began looking at ways to overcome some of these challenges. We wanted to move toward a more diversified, visually-interesting plant palette, while still honoring the history of this space as a rose garden. We began testing the idea of including different plants in the garden by adding in perennials for the summer season—guests who visited last year may remember seeing something new planted amongst our roses. We also wanted to maintain the garden’s original 1930s architecture.

Senior Horticulturist Kerry Ann McLean was charged with creating a new design that would both encourage lingering and exploration within the Rose Garden and connect more strongly to adjacent gardens. She used archival photographs to research the garden’s past and rediscovered Mr. du Pont’s original use of yews to frame and strengthen the axis into the Main Fountain Garden. The new design brings back these yew trees and adds an ellipse of yews in the center of the garden. The ellipse gives the garden structure, and the yews echo the yews of the nearby Topiary Garden.

Within the ellipse, we use roses to harken back to Mr. du Pont’s original design, but with lower-maintenance grandiflora and shrub roses, such as Rosa 'Harpageant' Easy Does It™.  The remaining beds are filled with a mix of perennials, grasses, and small trees and shrubs.

Sedges and grasses such as Carex testacea 'Prairie Fire' and Calamagrostis × acutiflora 'Karl Foerster' are woven through structural perennials such as astilbe, lupine, and iris. Self-seeding perennials such as campion and fennel fill in the gaps and create unexpected and exciting combinations over time; as McLean puts it, these are “combinations the gardener can’t imagine until they see it.”

Each bed has its own plant palette with a continuous color story throughout the garden. Guests can make a complete circuit of the garden and will keep seeing new plants and new combinations; the look will be natural, soft, and diverse. New plants take time to grow. This is a garden that will mature over time and will offer something new to see in every season. We can’t wait to watch the Rose Garden grow and blossom over the coming years!