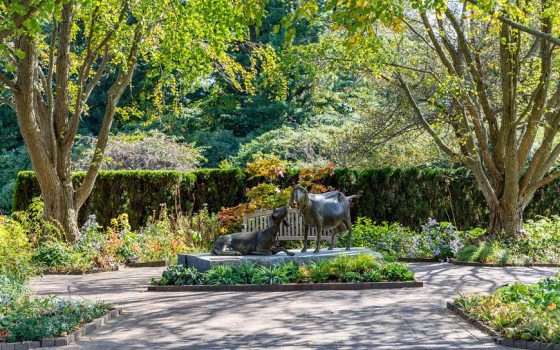 The Art of Heart

We are so pleased to welcome a new addition to our Idea Garden. Installed in late September, Chloe and Lucinda—an intricately detailed, beautifully realistic life-sized bronze sculpture by celebrated Brandywine Valley artist André Harvey (1941–2018) —now graces the garden and poignantly accentuates what this space is all about: creativity, growth, and evolution. A gift of the artist’s wife, Roberta “Bobbie” Harvey, and André Harvey, the sculpture tells a story of life and of love … a story that is best told by Bobbie, as she reflects on her late husband’s passion for art, the inspiration behind his revered work, and their journey together.

Looking at an André Harvey sculpture is like looking at the subject itself, thanks to Harvey’s trademark talent for creating breathtakingly realistic works. Throughout his impressive volume of small- and large-scale works primarily cast in bronze and today featured in many public and private collections, his attention to detail is extraordinary … and it’s perhaps even more extraordinary that Harvey was completely self-taught.

Much of Harvey’s works were inspired by his childhood, growing up in rural Pocopson near Chadds Ford. Harvey’s father was a conservationist who founded Delaware Wild Lands, a nonprofit organization dedicated to protecting the state’s land and water resources. “André’s father encouraged all the things that would be natural to someone living in the country,” Bobbie recounts. “So much of his work can be traced back to experiences from his childhood. The Crow, for instance, goes back to André watching crows landing on a scarecrow in his parents’ garden. Growing up in Pocopson was very, very important to how he evolved and what he appreciated.”

André attended Tower Hill School in Wilmington, Delaware and the Sanford School in Hockessin, Delaware, where he and Bobbie met as students. They married in 1964 after André graduated from the University of Virginia with an English degree in 1963 and after Bobbie graduated in 1961. André and Bobbie moved to New York City , where André began a job at Scholastic magazines and Bobbie as a medical technician at the Strang Cancer Clinic. After their time in New York, they returned to Delaware, where André taught English at the Sanford and Tatnall Schools in Delaware and Bobbie worked as a research technician for the New Bolton Center Hospital for Large Animals.

The Harveys realized they needed a change and left in 1969 to travel through Scotland, England, France, Spain, and Morocco … not realizing that André would discover his passion for sculpture while there. “We were coming out of Morocco and heading to what was then Yugoslavia when we decided to stop in Cannes for a mail check,” shares Bobbie. “I had been asking where the French liked to go and we had heard of this one area between Cannes and Nice in the foothills of the Alps. So we went there and we found magic. We arrived in the evening and were walking around, looking at shops, when we came upon a gallery with welded sculpture and pottery in the studio. That was when André stopped to look and said right then and there that that was what he wanted to do. Just by looking at that welded work, it all came together. I couldn’t believe it because at that point we had been married for five years. It worried me terribly for what was going to happen, what he was going to find. While he had painted for a time after graduating from UVA, this was something completely new.”

The next day, the Harveys met with the gallery owners, Michel Anasse (sculptor) and his wife Nicole (ceramist) … which became the first step in André’s art career, as he and Bobbie decided to stay in Vallauris so André could study with Anasse. “They only spoke French, so it was a little comical with all of us,” Bobbie chuckles. “They fed us a big lunch and found us an inexpensive place to live. That started everything. If you find times in your life when things aren’t working and you give yourself enough space, perhaps things will come together. You have to let things happen sometimes.”

When the Harveys returned to the States in 1970, André continued his artistic pursuit as an apprentice for local sculptor Charles Parks. “André would work for Parks during the day and then come home at night, get out his clay, and sculpt,” shares Bobbie. It was then that André worked on his first sculpture, a jumping frog titled Pond Dancer. While Bobbie returned to her work at the New Bolton Center Hospital for Large Animals, it didn’t take long for her to change direction. “I knew there were other things I wanted to do. I didn’t want a career doing research,” she shares.

Within a year of their return to the States, André’s work found itself in the Gallery at Centreville, Delaware and then at the George B. Scarlett Gallery outside of Kennett Square.  André's work was selling well and to such local mainstays as Betsy Wyeth, who purchased Samuel, a box turtle. Word quickly spread about André’s work and he was invited to display his work in five windows at the Tiffany & Co. store in Manhattan … a delightfully full-circle moment, considering André had found his inspiration in a store window in France. By that time, Bobbie decided to devote herself full-time to the business of André’s art and by the mid-1970s the Harveys had built a following as strong as their partnership.  “Through it all, there was this magic going on,” shares Bobbie. Today, Bobbie runs the André Harvey Studio in Rockland, Delaware.

There was plenty of magic when it came to Harvey’s creation of Chloe and Lucinda. André and Bobbie had been contacted by Chester County goat herd owner Peggy King, who was interested in André sculpting her goats. “We went there to the farm and it was just perfect,” shares Bobbie as she reminisces about their time with Peggy and her husband, Max. “It was wonderful. It all felt really, really right. There was no question as soon as he took a look at it that it was a place he could work. It was much more than a place where he thought he could do a goat. It was the whole environment. The owner’s personality. He would only work in places that felt right.”

Like so much of their lives together, to Bobbie, Chloe and Lucinda is about heart. It symbolizes the warmth that André put into all of his work and the love he had for the craft. It’s also a piece that speaks to togetherness … it’s one that just doesn’t work unless both of the goats are together. “Over the years people would ask to buy one goat,” shares Bobbie. “The whole sculpture is about the relationship. They go together.”

The idea of Chloe and Lucinda finding a home at Longwood was one that André and Bobbie talked about often before his death in 2018. “Longwood was a very personal place for us,” she shares. “Either the goats were going to be at Longwood or they were going to stay with me. I wanted to be able to see them, and what would be better than having them nearby where I could see them and so many people would be able to appreciate them? When you walk around Longwood it’s such a personal experience as you take in the beauty of it all. I’d like to think that taking in the goats goes along with taking in this incredible personal experience. I’d like to think that Chloe and Lucinda contributes to that.”

We are beyond honored to welcome you to see (but not touch!) the beauty of Chloe and Lucinda—together—to our Idea Garden, a space meant to stimulate creativity and encourage experimentation … and, above all, a place that celebrates heart.