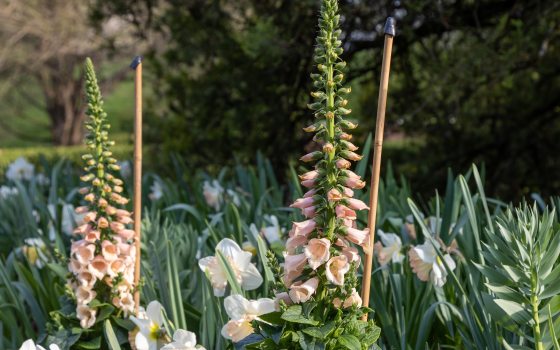 Tall, stately, and oh so gorgeous, Digitalis (foxglove) are at the height of beauty when it comes to visual interest in the late spring garden. With some varieties reaching five to six feet in height, and their tubular-shaped blooms bursting in vibrant hues of lavender to peach, foxgloves are nothing short of spectacular. These late spring flowers have just recently made their Spring Blooms debut along Flower Garden Walk, but we’ve been carefully planning and coaxing their arrival since last summer, using a growing technique rooted in precision and care.

Most of the foxgloves grown here at Longwood are considered biennials, meaning they produce a basal rosette of green, oblong leaves in their first year from seed and then flowers their second year. However, using a precise production and growing approach, we are able to get our foxgloves to bloom in less than one year. We start seed or buy in small plugs in the late summer and then pot the plants into larger containers in the fall, bulking them up before the cool weather hits, as the plants need to reach a certain size before they begin their cold treatment. In this respect, this fall bulk-up can be considered the foxgloves’ first full year of growth.

Once cool weather hits, we place foxgloves in a cool greenhouse where temperatures stay between 38 and 45 degrees Fahrenheit, which serves as the plants’ winter. This cold treatment is termed vernalization, and it ensures that we get uniform flowering and a nice flower size. Most of the foxgloves we grow require a period of cold in order to flower, and we aim to have the plants in that cool temperature range for approximately 1,000 hours. Those 1,000 hours do not need to occur continuously, but rather as a cumulative amount over a period of several weeks or months.

Once March rolls around, we start to warm the greenhouses up to about 55 to 65 degrees, which in turn forces the foxgloves to flower earlier than they would if planted outside. Once we see them start to form buds, we can cool them down if needed to slow the pace of flower development or speed up the pace by turning the temperature warmer. If these foxgloves were planted outside and not situated in a greenhouse, they would typically flower in the late spring or early summer. By forcing them under our greenhouse conditions, we can have them flower a full month or two early … perfect for our goal of a mid-April foxglove display date.

To achieve a single flowering stem, starting in mid-to late February (towards the end of the vernalization process), we remove all the side shoots that develop on both the lower stems and base of the plant. By removing these shots, the plant is able to put all its energy into one flower spike at the top, tending to make the flower larger and more of a showstopper, while making the stem taller as well.

For the multiple flowering stem foxgloves, we leave all the side shoots, except for a few that we selectively remove in order to keep good airflow moving through the plant. We also want to make sure the plant doesn’t become too crowded or overloaded with stems. Leaving the majority of the side shoots helps the plant create more flowers that tend to be a bit smaller in size. This normally reduces the overall height of the plants by a bit as well.

As you’ll see in our Flower Garden Walk display, our hard work has certainly paid off … and we’re delighted to share the end result with you. Several of the borders along Flower Garden Walk, including the beds around the circular fountain, have been positively festooned with the soft lavender-hued Digitalis purpurea ‘Camelot Lavender’—some grown with single stems and others with multiple stems—and the sweetly subdued Digitalis purpurea ‘Dalmation Peach’, which also features both single and multiple stems. Mingling amid our Flower Garden Walk foxgloves are a variety of late spring favorites, including textural Antirrhinum (snapdragons), unforgettable Myosotis (forget-me-nots), and vibrant pansies that seem to smile at all those who stroll past.

Foxgloves can also be found in a few other places throughout our Gardens this season, including snowy white Digitalis purpurea ‘Alba’ in our Square Fountain sunken garden just off of Flower Garden Walk, pale yellow Digitalis grandiflora ‘Carillon’ in our Conservatory’s Garden Path, and lovely, maroon-speckled Digitalis purpurea ‘Pam’s Choice’ nestled in our Idea Garden containers. Come take a spring walk with us and behold the beauty of the season.