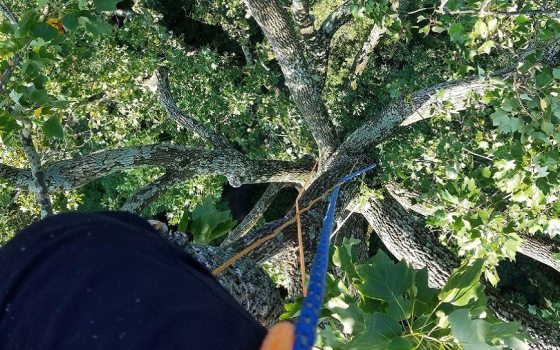 From the historic trees of Pierce’s Park that preface Pierre S. du Pont’s purchase of the Longwood property in 1906, to the towering 164-foot-tall tulip-tree (Liriodendron tulipfera) along Forest Walk that we’ve affectionately named Pierre’s Poplar, trees are among the most treasured and iconic facets of Longwood. Our trees are integral to our landscape, our legacy, and our plant research, as well as to the enjoyment of Longwood for generations to come … and for all of those reasons, we go to great lengths when caring for our trees. Among Longwood’s many methods of caring for our trees and helping facilitate their longevity is our lightning protection plan. Journey along with me as I walk you through the field of lightning protection, how it works, and how we choose which trees at Longwood should receive such protection.

Do you remember your elementary school lesson about Benjamin Franklin and a kite? The story goes that Franklin had been studying and experimenting electricity and lightning and had started to work on creating a lightning rod. He grew too impatient to wait for a Philadelphia church steeple to be completed for his study, so instead of attaching his lightning rod to that steeple, he decided to fly a kite with a metal key attached to it during a storm. Haphazard (yet ultimately valuable) experiments like these in the mid-1700s is what started the lightning protection industry. Although the industry mainly focused on protecting buildings, tall monuments, and explosives at armories, it eventually made it to the tree care industry in the early to mid-1900s. Most, if not all, of what is currently used within the tree lightning protection industry was derived from the structural lightning protection industry.

The arborist team at Longwood has been installing lightning protection systems since the 1970s, starting with approximately 40 trees and focusing on tall, historic, and stand-alone trees that were in prominent areas such as around the Conservatory, the Visitor Center, and the Peirce-du Pont House. During the mid-1980s we worked to expand our more protection as several trees without lightning protection systems had been struck and damaged or destroyed. Arborists attended training, consultants measured the electrical resistance of soil throughout the gardens, and strategically chosen trees were scheduled for outfitting.

In 2015, the arborist team performed another assessment and recognized the need for further protection; more trees needed more systems, thereby increasing the coverage of the tree canopy. Since then, we’ve installed 40 new lightning protection systems, bringing our total to 110 protected trees both within our public garden spaces and surrounding property … but the resulting protection extends beyond those 100 trees. An important thing to remember is that several surrounding trees are protected by each system, as a “cone of protection” exists at the top of each system and any tree that falls in this area is technically protected by the “parent” system.

You may be wondering just how lightning protection works. As storm clouds form, negatively charged ions gather and settle at the bottom of the cloud. Simultaneously, positively charged ions start to gather at the ground’s surface and spread up buildings, bridges, flagpoles, and trees. As the air fills with moisture, the opposite charges are attracted toward one another. The negatively charged ions begin to send down leaders in a zig-zag formation. Positive ions do the same on objects and reach up into the sky and when the two leaders meet, they cancel each other out and we hear the result as a thunder clap! As a reminder, lightning protection systems only provide a path of least resistance; they do not attract the lightning itself. A properly installed system will allow the lightning’s electricity to travel down the cable, safely past the tree, and lead it to dissipate in the ground after it reaches the end of the grounding rod.

It’s imperative that a properly trained ISA Certified Arborist installs a lightning protection system. Once a designated tree has been selected to receive a system, it helps to first plan the path that the cable will follow down the trunk and where the grounding rod will be placed. A climber then ascends the tree and safely positions themselves at the very top of the tree. A rope is lowered down the intended path of the cable so the climber can haul up the cable or have their coworkers help to pull it up to them. An air terminal is then added to the top of the cable, which terminates the cable. Once the top is secured, the cable is attached to the tree with a special spike called a standoff. As seen in the picture below, the standoff can be attached to the cable and then hammered into the tree’s bark and cambium. This does not damage the tree. The standoff not only holds the cable up in the tree, but also keeps the cable off the bark of the tree. These standoffs are placed every 3 to 6 feet down the length of the cable.

It is important to install the cable in as straight of a line as possible so the electricity can flow as efficiently as possible. Once the cable is secured down to the base of the tree, the cable needs to be run a specified distance away from the trunk to a grounding rod.  Grounding rods are typically 8 feet long and are driven vertically into the ground and below the surface. In regions with sandy soil (southern and some northern states) grounding plates are used for better dissipation.  Once the cable is attached to the grounding rod, the lightning protection system has been completely installed.

It’s important for an arborist to inspect the system at regular intervals ranging from annually to every three years depending on the size, age, and growth rate of the tree. During these inspections, we ensure that the cable has not been broken or pulled out of its standoffs, or that the tree has not grown significantly, which would lead to the air terminal no longer being near the top of the tree. We also periodically reassess which trees may require lightning protection systems to further expand the coverage of our mature canopy. Overall, our selected trees are assessed based off of a tree’s overall height in a specific area, whether or not it is a stand-alone tree, if it is within 10 feet of a structure, or if it is significantly old. One thing that’s not in question, however, is the fact lightning protection systems serve as just one tool in our overall care and stewardship of each and every tree here at Longwood.