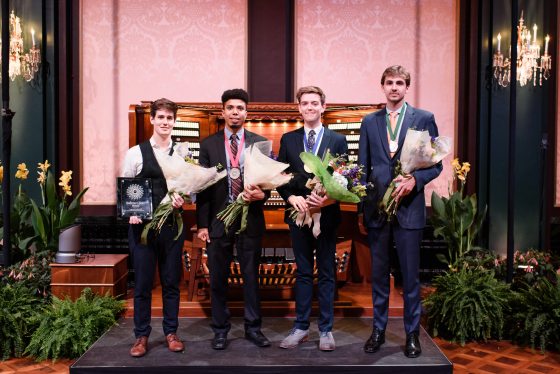 KENNETT SQUARE, PA-Joshua Stafford took  the Pierre S. du Pont First Prize in the 2016 Longwood Gardens International Organ Competition. A Curtis Institute of Music and Yale School of Music alumnus, Stafford, 27, impressed the judges with his artistic and technical skills.  “I am so honored,” Stafford said after his winning performance on June 18. “This whole competition has been amazing. I am beyond thrilled.”  In addition to the grand prize of $40,000, Stafford also takes home a contract with Phillip Truckenbrod Concert Artists and a guaranteed 2016-2017 Performance at Longwood Gardens.

“These very talented musicians each showcased their unique styles,” said Head Judge Ken Cowan,  Associate Professor and Head of Organ at Rice University’s Shepherd School of Music in Texas. The jury was very thoughtful in its deliberations, considering both the competitors’ artistic and technical expertise.  In the end,  Stafford’s “constant musical engagement” captured the judges’ notice. “He seemed so at home at The Longwood Organ,” Cowan explained.

“The Longwood Gardens International Organ Competition is designed to give the organ world’s best young talents a platform to present their musical artistry,” said Longwood Gardens Executive Director Paul B. Redman.  “It was our pleasure to listen to these wonderfully gifted musicians throughout the week and to play a part in helping them to advance their performance careers.”

Joshua Stafford, 27, of New York, is the Director of Music at St. Peter’s Episcopal Church in Morristown, New Jersey, where he conducts multiple choirs. He received a Bachelor of Music Degree from the Curtis Institute of Music in 2010 as a student of Alan Morrison and a Master of Music Degree from the Yale School of Music in 2012 as a student of Thomas Murray and Jeffrey Brillhart. In demand as a recitalist and improviser, Joshua has performed at many notable venues on the east coast and has been featured on MPR’s Pipedreams and WRTI’s Wanamaker Organ Hour.

Alcee Chriss III, 23, of Texas is an alumnus of Oberlin Conservatory of Music, receiving a Master of Arts degree in historical keyboard and a Bachelor of Arts degree in Organ. He has won numerous cometitions and performed in such venues as the Myerson Symphony Center (Dallas, TX), Kennedy Center and Washington National Cathedral, among others.

Colin MacKnight, 22, of Maryland completed the Bachelor/Master Degree Program at The Juilliard School, studying with Paul Jacobs, an dis pursuing his doctorate at Juilliard. He is organ scholar at New York City’s Church of the Resurrection under music director, David Enlow.

Greg Zelek, 24, of Florida is a graduate organ student of Paul Jacobs at The Juilliard School, where he is a recipient of the Kovner Fellowship and received his Bachelor of Music degree.

The Longwood Organ is the largest residential organ in the world, with 10,010 pipes and 146 ranks. This instrument is not easy to wrestle with musically, but the finalists rose to the challenge, performing engaging and demanding repertoire. A recording of the finals can be viewed online at www.longwoodgardens.org.

The next Longwood Gardens International Organ Competition will take place in June 2019.

About Longwood Gardens
Longwood Gardens is one of the world’s great gardens, located 30 miles west of Philadelphia in Kennett Square, PA, encompasses 1,077 acres of gardens, woodlands, meadows, fountains, a 10,010-pipe Aeolian organ and conservatory. Longwood continues the mission set forth by founder Pierre S. du Pont to inspire people through excellence in garden design, horticulture, education and the arts. More information at www.longwoodgardens.org.