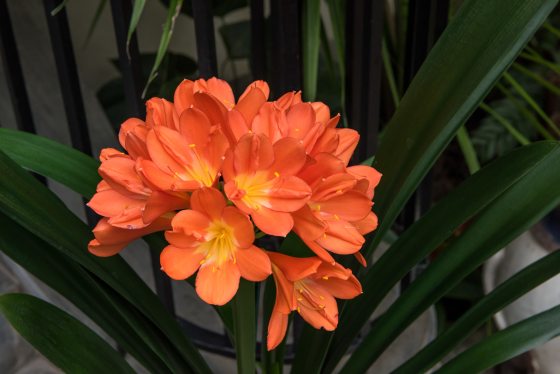 Clivia enthusiasts from around the U.S. will be in attendance when Clivia miniata ‘Longwood Sunrise’ makes its debut on March 15.

KENNETT SQUARE, PA - Longwood Gardens is releasing its third named clivia on March 15 when the North American Clivia Society holds its International Symposium and Show at Longwood Gardens.  Clivia enthusiasts from around the U.S. will be in attendance when Clivia miniata ‘Longwood Sunrise’ makes its debut. ‘Longwood Sunrise’ will be on display throughout the weekend.

Longwood began its breeding program in 1976, and has released two yellow clivias, Clivia miniata ‘Longwood Debutante’ in 2011 and Clivia miniata ‘Longwood Fireworks’ in 2012.  One factor that slowed the program was the extended period of time that it takes for a clivia seedling to mature. Seedlings can take up to eight years to bloom from the time the seed is planted. In addition, the first flowers produced by a seedling are usually not representative of the plant's true genetic potential and proper evaluation of a seedling cannot be accomplished until the second or third flowering cycle.

About Longwood Gardens
In 1906, industrialist Pierre du Pont (1870-1954) purchased a small farm near Kennett Square, PA, to save a collection of historic trees from being sold for lumber. Throughout his life, Mr. du Pont indulged his passion for gardening, turning his farm into a magnificent horticultural showplace. Today, Longwood Gardens is one of the world’s great gardens, encompassing 1,077 acres of gardens, woodlands, meadows, fountains, a 10,010-pipe Aeolian organ and conservatory. Longwood continues the mission set forth by Mr. du Pont to inspire people through excellence in garden design, horticulture, education and the arts, through programming that includes exhibitions, musical performances by leading artists, renowned horticulture education programs, horticulture research, environmental stewardship and cultural and community engagement.