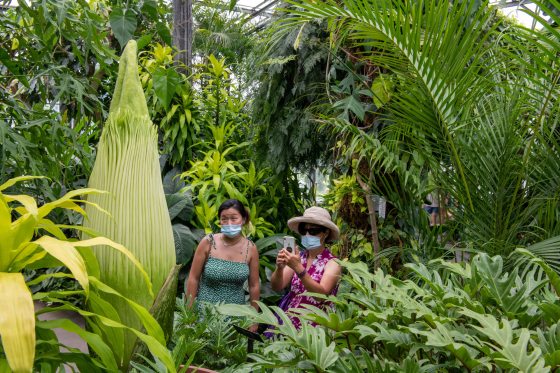 KENNETT SQUARE, PA– Longwood Gardens is inviting guests to get a whiff of something rare in the plant world. The Gardens announced today that its titan arum (Amorphophallus titanum), also known as the corpse flower, is preparing to bloom, as early as this week. Once it begins to fully open, the plant, affectionately named Sprout, will only bloom for 24 to 48 hours, giving guests a limited time to experience this unique phenomena. It first blooms (and raises the biggest stink) at night and is estimated to begin unfurling its bloom in just days. Longwood is offering extended hours for guests to see (and smell) the amazing plant throughout its bloom, beginning this Wednesday. Guests must purchase tickets in advance, online at longwoodgardens.org.

Often called the rock star of the plant world, titan arums are known for their putrid smell when in bloom—often likened to the stench of rotting meat. The odor is most potent after the bloom initially opens, which occurs at night into the early morning. The rich, burgundy inflorescence also generates heat, which allows the stench to travel farther. In nature, this combination of heat and smell efficiently attracts pollinators, such as dung and carrion beetles, from across long distances.

Senior Horticulturist Joyce Rondinella has been caring for Sprout since its arrival at Longwood in 2018. She is understandably excited about the impending bloom and explains why the event is worth making a stink about. “The titan arum is an amazing plant and to experience one blooming is very rare,” she explained. “Successfully blooming one is a career highlight for me due to its challenging life cycle and the cultural requirements needed.”

A corpse flower in bloom is rare, both in the wild and in the world of horticulture. Its inflorescence is the largest in the plant world. At a few botanic gardens and arboreta around the world, titan arums have been coaxed into bloom after years of careful cultivation. The plant is native to the tropical rainforests of Sumatra, Indonesia, and was first discovered in 1878.

Sprout was started from seed in 2008 at UC Berkley and was given to Longwood Gardens by Chicago Botanic Garden, where it bloomed in April 2016. Sprout arrived at Longwood in August 2018. Once at Longwood, Sprout happily settled in and was on display for more than a year showing an impressive leaf. As the leaf went dormant, Sprout was given a rest and taken off display and put in a growing house in October 2019. Its leaf was removed and Sprout spent the winter in a greenhouse where it enjoyed temperatures of 65 to 70 degrees and was monitored closely for optimal moisture requirements. In March 2020, Sprout was repotted and Rondinella began to notice new growth in May. Sprout went on display on May 28 at just a few inches tall. Now at 64 inches tall, Sprout is growing as much as 6 inches per day. Its growth rate will slow as it prepares to bloom and quite literally, stink up the place! The last time a titan arum bloomed at Longwood was April 14, 1961.

For more information, to purchase tickets and to watch a live feed of Sprout as it grows, visit www.longwoodgardens.org/sprout.

About Longwood Gardens
In 1906, industrialist Pierre du Pont (1870-1954) purchased a small farm near Kennett Square, PA, to save a collection of historic trees from being sold for lumber. Today, Longwood Gardens is one of the world’s great horticultural displays, encompassing 1,100 acres of dazzling gardens, woodlands, meadows, fountains, 10,010-pipe Aeolian organ and 4.5-acre conservatory. Longwood continues the mission set forth by Mr. du Pont to inspire people through excellence in garden design, horticulture, education and the performing arts, through programming that includes exhibitions, musical performances by leading artists, renowned horticulture education programs, horticulture research, environmental stewardship and community engagement. Longwood is one of more than 30 gardens in the Philadelphia region known as America’s Garden Capital. For more information, visit longwoodgardens.org.