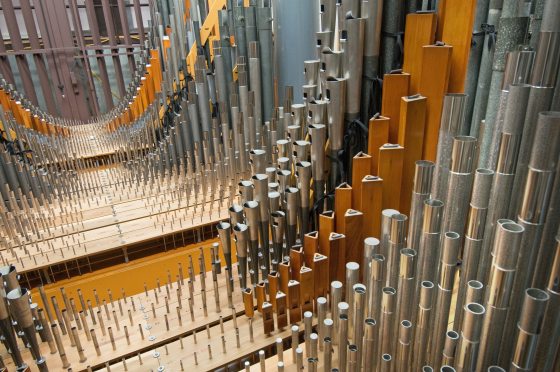 Kennett Square, PA- Following a seven-year, $8 million restoration initiative, Longwood Gardens will officially debut its newly renovated pipe organ to the public on February 4, 2011.  Longwood’s 10,010-pipe instrument, the largest residence organ in the world, was painstakingly restored to its original 1930 condition and now features a new console that incorporates the latest computer technology.  Upcoming performances by renowned organists Peter Richard Conte, Cameron Carpenter, and Hector Olivera will continue the longstanding tradition of live music in the Longwood Conservatory, which has been performed since the time of Longwood Gardens founder Pierre S. du Pont.

An organ aficionado, Pierre du Pont personally oversaw the design and construction of Longwood’s first Aeolian organ, which was installed in 1921 and enlarged soon thereafter to include 3,650 pipes and 79 stops.  In 1929-1930, du Pont replaced this initial organ with the much larger Aeolian model that remains in Longwood’s Conservatory to this day.  (Aeolian comes from Aeolus, for the Greek god of wind.) Custom-designed by Longwood organist Firmin Swinnen, the organ’s pipes are divided into 146 ranks (sets of pipes), 237 stops and couplers, and five 32-foot pedal stops, that sound from in nine chambers opening onto the Ballroom.

The new console is moveable and can play the organ pipes from four different locations within the Ballroom.  Its solid state circuitry permits versatility unimaginable in earlier consoles. Whereas the 1929 and 1959 consoles had one setting for each of the stop-changing piston buttons underneath the keyboards, this console can recall 256 different combinations of up to 353 tilting tablets per button.  Other features include removable memory cards that allow each organist to retain their personal combinations.

“At Longwood we are as committed to preserving our remarkable history as we are to developing and practicing new techniques and technologies.  This meticulous restoration of Pierre du Pont’s magnificent pipe organ does both,” said Longwood Director Paul Redman.  “Never before has this organ been so true to its original state, while also having innovative computerized features that can capture the moment, preserve it for eternity, and ultimately share it with the rest of the world.  But most of all, we are delighted the organ is returning and will remain an integral part of the Longwood Gardens experience.”

Restoration Process
With the goal of returning the organ to its 1930 splendor, Nelson Barden & Associates (Newton, MA) and Spencer Organ Company (Waltham, MA) from 2004 until 2011 restored or rebuilt virtually every element of the 10,010-pipe instrument.  Other contributors included Richard Houghten (electrical circuitry), Jonathan Ambrosino and Daniel Kingman (tonal finishing), David and Christopher Broome (reed restoration), David Snyder (piano restoration), John Irwin, Roy Battell, and Sean O’Donnell (computer player), and Curt Mangel (consultant).  An entire unaltered Aeolian concert organ from the same era was acquired to provide documentation as to the original voicing and to supply missing pipes. The team sought to recapture the character of the 1930 organ, which had undergone a prior restoration in the 1950s that resulted in some historically inaccurate tonal changes.  The current restoration is amending these subtle issues, as well as cleaning and preserving all elements of the instrument.  Tonal finishing will continue for one year following the inauguration, allowing the restoration team to monitor and adjust the instrument.

In addition to respecting the organ’s past, the restoration team looked to the future by employing cutting-edge technologies. The new console designed by Peter Richard Conte and built by Robert Turner includes the latest computer technology, permitting unparalleled control for the performer.  The console, weighing 2,800 pounds, can be floated on a cushion of air anywhere in the Ballroom, plugging in at one of four connection points.  The look of the new console is based on the 1930 design, with 353 tilting tablets arranged in multiple rows. The project also included a sophisticated mist fire suppression system, new climate control, and a surrounding organ exhibit with glass windows for viewing five of the nine pipe chambers, providing a rare perspective on the inner workings of an organ.

“Mr. du Pont was a great fan of technology and innovation, and he would likely be fascinated by the computerized console and the digital transfer of the paper rolls, just as the punched paper rolls were state-of-the-art in his time,” said Longwood Gardens Pierre S. du Pont Fellow and Historian Colvin Randall, who advised on the restoration project.  “We think he would be very pleased that the organ is true to the original and also equipped for the modern organist.”

Longwood Gardens
In 1906, industrialist Pierre S. du Pont (1870-1954) purchased a small farm near Kennett Square, PA, to save a collection of historic trees from being sold for lumber. Throughout his life, Mr. du Pont indulged his passion for gardening, turning his farm into a magnificent horticultural showplace.  Today, Longwood Gardens is one of the world’s great horticultural displays, encompassing 1,077 acres of gardens, woodlands, meadows, fountains, the Aeolian organ and conservatory.

The garden settings of Longwood have long-served as the backdrop for showcasing top performing artists. Since Pierre du Pont first welcomed his good friend John Philip Sousa to the Conservatory Gardens in 1922, Longwood has hosted some of the finest artists from various performing genres, including Martha Graham, Ruth St. Denis and Ted Shawn, as well as Van Cliburn Medalists, Symphony Orchestras, Grammy-winners and more.

From Longwood’s origins, environmental stewardship also has been a priority at the Gardens. Every plant used in the seasonal displays is composted in Longwood’s robust composting program, producing soil for future plantings. The Gardens limit the use of pesticides through a leading Integrated Pest Management Program that uses natural means whenever possible. To conserve energy, Longwood’s innovative root-zone heating system in the conservatory planting beds enables heat to be concentrated on the roots of the plants without having to heat the ambient air.

Additionally, for more than half a century, Longwood Gardens has been educating tomorrow’s horticulture leaders. From curriculum-based programs for ages K-12, to high-school and college internships, to a Master of Science Degree program, Longwood’s educational programming is internationally recognized for its academic breadth, depth, and experiential learning. Graduates from these programs go on to assume leadership positions at public and private gardens around the world.