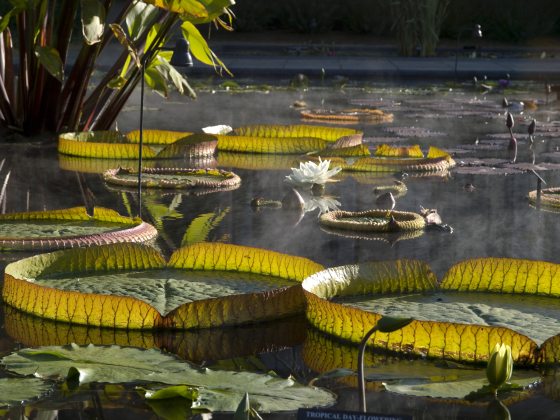 Longwood Gardens to release on May 1 Victoria: The Seductress, a major new book chronicling the discovery, impact and influence of one of the world’s most fascinating plants.

Kennett Square, PA- Longwood Gardens today previewed Victoria: The Seductress, the first lavish and comprehensive book chronicling the discovery, impact and influence of the Victoria water lily, a mammoth Amazonian water lily that is one of the world’s most fascinating plants. Longwood Gardens Curator of Plants and international plant explorer Tomasz Aniśko authored the book, which was previewed at the Philadelphia Flower Show where a Victoria water lily grown by Longwood was on display.  The book will be officially released May 1, 2013.

Victoria: the Seductress (ISBN-978-1-935442-22-6, $69.99; Longwood Gardens; dist. Beckon Books) is a sumptuously illustrated, 468-page book that tells the fascinating story of the extraordinary Victoria water lilies, their discovery, introduction into cultivation, and the adventures of countless personalities around the world who attempted to grow and understand this aquatic marvel. Readers will discover the many ways in which this larger-than-life plant became a powerful symbol and influenced the collective consciousness of society.

Hailed as the Queen of the plant Kingdom, Victoria has no equal among the plants of the world, and even today the lily remains as elusive and unattainable for a home gardener and nature enthusiast as she was 150 years ago when she entered for the first time into the exquisite princely houses and conservatories of Europe and America. By 1851, as Victoria’s popularity was spreading through the British Isles and Europe, Philadelphia became the first place in America where Victoria flowered. This was a crowning achievement for Caleb Cope, the president of the Pennsylvania Horticultural Society.

Although the introduction of Victoria into cultivation inspired several magnificent folio books published in both Europe and America in the 1850s, there have been few literary works published on this subject since. This book offers a new perspective of the subject, and presents a vivid portrait of Victoria to those garden enthusiasts interested in natural and cultural history.

This book tells the story of Victoria’s discovery in the Amazonian wild and explains some the most intriguing aspects of lily’s biology, such as the flower’s annual development dictated by seasonal floods, and the lily as a rare case of thermogenic (heat generating) flowering and its pollination by nocturnal beetles. The book details the international excitement and events that lead to the introduction of Victoria into cultivation in Europe, America and the rest of the world. It explores the many ways in which Victoria inspired works of art, influenced culture as a powerful symbol of feminine imagery in the world, and reflected our fantasies of primordial wilderness.

This book is based on the author’s original research, expeditions to South America, visits to European and American gardens and museums, and historical sources. It also draws from a large body of literature in languages other than English to reflect the wider context to the Victoria narrative than previously presented. It tells the story of the plant through the lives of many explorers, naturalists, botanists, gardeners, and others who became involved in Victoria’s journey out of the wilds of the Amazon and Paraná, and into the princely houses of horticultural opulence and admiration in the civilized world. The book explores the complex concepts of Victoria’s biological functions and structures and presents them in a format accessible to general audiences, allowing for better appreciation of the intricate ecological systems to which this plant is linked. The book is richly illustrated, featuring 425 images, including many historical images, as well as the author’s original photographs.

About Longwood Gardens
In 1906, industrialist Pierre du Pont (1870-1954) purchased a small farm near Kennett Square, PA, to save a collection of historic trees from being sold for lumber. Today, Longwood Gardens is one of the world’s great horticultural displays, encompassing 1,100 acres of dazzling gardens, woodlands, meadows, fountains, 10,010-pipe Aeolian organ and grand conservatory. Longwood continues the mission set forth by Mr. du Pont to inspire people through excellence in garden design, horticulture, education and the performing arts, through programming that includes exhibitions, musical performances by leading artists, renowned horticulture education programs, horticulture research, environmental stewardship and community engagement. Longwood is one of more than 30 gardens in the Philadelphia region known as America’s Garden Capital. For more information, visit longwoodgardens.org.

About the Author
Dr. Tomasz Aniśko is an international plant explorer and curator of plants at Longwood where he oversees proper naming and identification of plants, coordinates plant trials and plant distribution programs, and leads plant exploration efforts. Dr. Aniśko began his career as a researcher at the University of Life Sciences. A sabbatical at the Royal Horticultural Society's Garden at Wisley in Surrey, England and an internship at the Morris Arboretum in Philadelphia, Pennsylvania, inspired Dr. Aniśko to dedicate his career to public horticulture. He holds Master's Degree in Horticulture from the University of Life Sciences in Poznań, Poland, and Doctorate in Horticulture from the University of Georgia. He has participated in 16 plant-collecting expeditions in Asia, Australia, Europe and South America. Dr. Aniśko has published more than 100 articles and two books Plant Exploration for Longwood Gardens (2006) and When Perennials Bloom: An Almanac for Planning and Planting (2008).