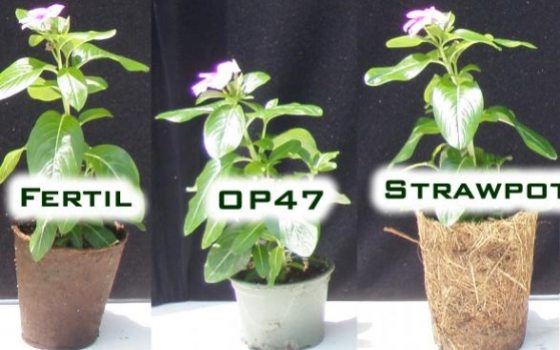 Biocontainers offer an exciting opportunity for plant producers and home gardeners to become more earth friendly. Currently the majority of ornamental crops are produced in petroleum-based plastic containers. The extensive use of plastic results in a significant waste disposal problem and the plastic ends up in a landfill or hopefully gets recycled.

Container Wall Strength To determine container strength, containers were filled with potting substrate, placed in a greenhouse and watered once per day. After four weeks, substrate was removed and the force required to punch a 0.2 inch probe through the side of the container was measured. This was done to simulate the force it would take a finger to puncture the container wall.

Plastic had the highest strength followed by paper containers. Cocofiber and ricehull containers were stronger than the remaining containers and of all containers tested, peat, Fertil and Cowpot containers had the lowest wall strengths. This test is important to determine whether a container possesses enough durability when being handled. The researchers found that if a container’s wet wall strength was less than 2 kg, the containers tended to tear or break and handling became difficult. In this study, all containers had adequate wall strengths except Fertil, peat and Cowpot containers, and thus handling of these containers when wet was difficult and could make them problematic for some growers. Decomposition of Plantable Biocontainers Vinca 'Cooler Blush' were greenhouse grown for 6 weeks in plantable biocontainers and transplanted into outdoor beds with the biocontainers were left intact on the rootball. After 8 weeks, the level of decomposition of the container was determined and expressed as a percentage of the original dry weight of an unused container.

Cowpot containers had the highest level of decomposition, cocofiber had the lowest and all other containers were intermediate. Variation in decomposition rates are likely due to the differences in container composition. Those made of high cellulose materials, which decompose easily, such as Cowpots, had higher rates of decomposition than those with high amounts recalcitrant materials such as cocofiber. Additionally, nitrogen in the dairy manure used to produce the Cowpot containers may have stimulated the activity of microorganisms and subsequent decomposition rates. Container strength and biodegradation varied among the different types of biocontainers tested. Fertil, peat and Cowpot containers had wet strengths low enough to make handling difficult. On the other hand, these biocontainers were the fastest to decompose in the landscape. Depending upon the crop, cultural conditions and handling, different biocontainer properties will be more or less important. Plant producers wanting to improve sustainability by switching to biocontainers will need to evaluate which of the properties are the most significant and choose a biocontainer that best fit their needs. For more information on biocontainer physical properties please see Evans, Taylor and Kuehny. 2010. Physical Properties of Biocontainers for Greenhouse Crop Production. HortTechnology. 20: 549-555. This project was funded by the Arkansas Division of Agriculture, Longwood Gardens and The LSU AgsCenter.