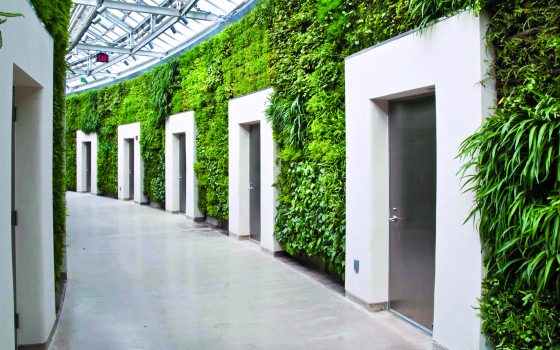 Longwood often hunts the globe for new or extraordinary plants to conserve and showcase in the Gardens. Recently, I went on a different sort of expedition—to inspect the plants for Longwood’s new East Conservatory Plaza green wall. My mission was to identify any potential pests or diseases that could threaten the new display.

Most plant collecting trips are about what we’d like to find, but my trip was what I hoped I didn’t find. Some invasive species were spread via the horticultural trade years ago, but many current introductions are the result of imports with infected packing material or other international cargo. As I traveled to Florida to inspect the plants, my mind ran to thoughts of red imported fire ants, red palm mites, pink hibiscus mealybugs, chilli thrips, and many others… Operations Manager Marc Battaglini of Michael’s Nursery in Boynton Beach, FL (who has graciously sourced and grown on the plants in the green wall) welcomed me and introduced me to Shipping Manager Vivienne, Grower Lus, and the rest of the Michael’s team. A grooming crew had been putting in over 20 hours a week cleaning each of the 12”x12” panels that make up the green wall by hand.

This is no easy feat. As I stood under the shade cloth I checked my watch, it was not even 8:30 in the morning and the temperature had approached 90°F with almost 100% relative humidity. The panels were laid out horizontally along many benches in the greenhouse, and were placed in the finished order they would occupy once shipped and installed vertically. The panels have occupied well over 5,000 square feet of greenhouse space at Michael’s since April of 2010, when they were assembled from individual plants and blank panels. Spider plant, ballistic plant, spike-mosses, and many varieties of ferns are part of the wall. Within each panel, the plant types are randomly planted to avoid a repetitive, mechanical (or patterned) look. It took me roughly five hours to scour the panels with the aid of a digital camera, hand lens, and various other specialized insect and disease sampling tools. The good news—no major invasive pests or diseases were observed that would delay or eliminate shipment. The bad news—Michael’s had been battling hot temperatures and an infestation of armyworm caterpillars. The hot temperatures caused plants to burn or grow slower on some panels and they will need to be replaced. The caterpillar pest migrates northward each year, and is something that was also a challenge to Longwood crops this summer. We discussed our options for pre-shipment caterpillar treatments, and whether to delay or expedite shipping on the panels that contained plants where growth was affected by the heat. Thanks to the conscientious dedication of all parties involved, the plants were shipped and installed on time. The wall was installed by Ambius, the principal contractor, and designed by Kim Wilkie, the landscape architect for the entire East Conservatory Plaza. Wells Appel of Philadelphia and several Longwood Staff also provided assistance. The finished wall is the largest in North America, and contains over 3,600 individual panels reaching 14’ high. It winds around the entire inside of the new plaza, and as such it is truly a grand “green” addition to Longwood Gardens. We invite you to come see this exciting new addition to the Gardens when the New East Conservatory Plaza opens to the public on Saturday, October 9!

Getting the wall from Michael’s in Florida to Longwood Gardens in Pennsylvania relied on the acumen of Paula Engelman and Denise Eichmann of Ambius and Michael's Shipping Manager Vivienne. Three tractor trailers were required to haul the shipment. The pre-taped cardboard boxes that were staged for assembly formed a small mountain in the warehouse. Each panel was placed in a plastic liner and boxed with its code labeled on the outside. The panel boxes were arranged on pallets in eight layers of nine boxes per layer, with cardboard placed every two layers to spread out weight. This made for an 8’ tall pallet that contained 72 boxes per pallet, for a total of over 50 pallets. Each pallet itself was shrink wrapped in plastic to hold it together. The pallets went into climate-controlled refrigeration trucks set at 55°F on their 36 hour journey to Longwood.