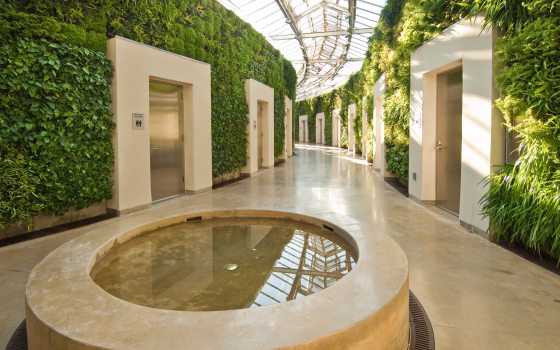 The Unsung (and Unseen) Heroes of our Green Wall

Longwood’s Green Wall is a truly stunning sight to behold. Our guests snap hundreds of photos of it and reactions of “oohs” and “ahhs” can be overheard every day.

Guests to Longwood aren’t the only ones who love the Green Wall. To insects and mite pests, this visual masterpiece is nothing more than a vertical buffet of juicy, delicious plants just waiting to be feasted upon. It’s not a matter of “if” the Green Wall will get pests; it’s a matter of “when.” The densely planted foliage provides lots of cover for mealy bugs to hide and many of the plant varieties are known hosts for spider mites.

Longwood’s Integrated Pest Management (IPM) staff battles these pests with a non-chemical approach called biological control. Biocontrol, as it’s known for short, has been part of Longwood’s IPM program since the mid-90s and is the use of one live organism to combat another. We do this by purchasing beneficial insects and mites from commercial insectaries and then releasing them according to a schedule. At 4,200 square feet in surface area, our Green Wall, the largest in North America, is the perfect place to use this method large-scale. Since last spring, we have been releasing several biocontrol agents on the Green Wall.

To control aphids, we release tiny wasps called Aphidius ervi. No larger than gnats, these wasps sting individual aphids and lay an egg in each one. As the egg hatches and develops into an adult wasp, the aphid dies. Although a few Aphidius ervi wasps can destroy an aphid population, they pose no danger to humans as they are much too small to sting us.

Released in tiny bags called sachets, Amblyseius californicus, a type of mite, prey on spider mites. Each sachet contains approximately 2,000 mites and serves as a breeding system. Because they can go dormant and survive in the absence of prey, Amblyseius californicus work very well as a form of biocontrol. On the Green Wall, we do our best to hide the sachets, but if you have a sharp eye you can find them.

Another predatory mite we use is Amblyseius swirskii. This mite eats whiteflies and thrips. Like its cousin Amblyseius californicus, Amblyseius swirskii comes in breeding sachets that are hung among the plants in the Green Wall. However, it isn’t as hardy as Amblyseius californicus and needs a constant source of prey to survive. Encarsia formosa and Eretmocerus eremicus are both parasites that kill whiteflies. Like Aphidius ervi, they are tiny wasps that sting their prey. These two species are mixed in a 50-50 ratio and deployed on small cards that we hide among the plants.

To control thrips, we use the minute pirate bug, Orius spp. Orius are very small—only a few millimeters in length. We distribute them as adult insects which will not only feed, but also mate and lay eggs. In addition to being excellent thrip predators, Orius also hunt aphids and spider mites. Best of all, they survive on plant pollen in the absence of prey, ensuring that we will always have a population on the Green Wall.

So far, we’ve been very pleased with the results of biocontrol on the Green Wall. Although we do occasionally find a few bad guys, our biocontrol agents are keeping pests at levels well below what we can tolerate.