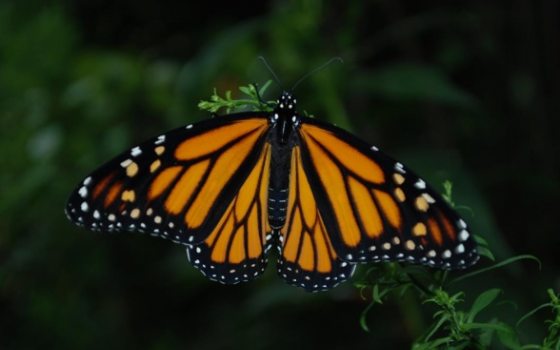 As part of Longwood’s Community Read of A Sand County Almanac, I recently had the pleasure of speaking with Curt Meine, author of Aldo Leopold: His Life and Work, published by the University of Wisconsin Press. Meine currently serves as Senior Fellow with the Aldo Leopold Foundation, Senior Fellow with the Center For Humans & Nature, and Adjunct Associate Professor in the Department of Forest and Wildlife Ecology at the University of Wisconsin-Madison.

How did you first become interested in the work of Aldo Leopold?

I first read Leopold as an undergrad and later went to Madison for graduate school at the University of Wisconsin, where Leopold taught and where his papers resided. My Master’s degree dealt with The Land Ethic and my PhD was his biography. By then I thought I was done with Leopold, but through the 1990s different dimensions of his work stood out in sharper relief. The theme of biodiversity was there in early form, just one of a dozen fields—including conservation biology, environmental ethics, and ecology—that informed my own work.

Leopold does seem to touch on a lot of different fields in his writing.

Exactly. That unique breadth is what partially drew me to him. Leopold is a powerful historical example of a mind wrestling with interdisciplinary issues. For example, Leopold was not only a defender of wilderness but he also had an understanding of sustainable agriculture, water, food, climate—and a capacity for integration. Add to that Leopold’s powerful poetic literary voice.

It’s a voice that still resonates today, even though A Sand County Almanac was published in 1949. Are there passages that are particularly powerful for readers in the 21st century?

I give a different answer to this question all the time, but I’ll pick two passages for now. One has current relevance. This year I’m involved in efforts to celebrate the 100th anniversary of the extinction of the passenger pigeon. Leopold’s essay “On a Monument to the Pigeon” is one of the most dramatic, evocative, powerful pieces of prose. When you read that essay, it has tones of post-WWII sobriety and even grief. This was Leopold at the height of his literary power and ethical explorations, touching on themes of extinction and biodiversity.

Another passage that I often point out comes late in the essay The Land Ethic:
"I have purposely presented the land ethic as a product of social evolution because nothing so important as an ethic is ever ‘written’ . . . it evolved in the minds of a thinking community."

Here Leopold is framing a large philosophical argument. But instead of speaking on high, he liberates the idea and opens it to a larger thinking community. It’s an invitation to the reader to become an active participant in this social movement.

That quote speaks directly to Longwood’s Community Read and our discussions of Leopold’s work.

Yes, and I’m delighted that Longwood is doing this. But ironically, in a sense, it’s not about Leopold. It’s how to use Leopold’s writing and his experience to inform our own challenging conversations. We obviously have much more sophisticated areas of understanding that Leopold didn’t have access to. But the aesthetic power of his prose and the capacity to frame these large questions in an open way allows us to take the conversation into the future.

If you were to write "A Letter to a Young Conservationist," what advice from the Leopold legacy and from your own experience would you pass along?

First, it doesn’t matter where you are. Every place deserves care, commitment, and awareness. Every place has challenges and opportunities, whether it’s the innermost cities or the most remote wildlands.

Second, even in these uncertain and unpredictable times, young people should realize that they’re not facing the future alone; they’re standing on the shoulders of many others who came before, who provided a framework of ethical and scientific concepts. Leopold’s story is about the evolution of ideas.

Third is that you can plug in anywhere and anyway you want. You don’t need a degree in conservation biology to be a conservationist. It will take all the ways of life we follow—the deep well and broad diversity of talent and knowledge—to re-imagine our future and our roles within it.

Much of A Sand County Almanac is about awareness and observation, which Longwood hopes to encourage through its Meadow Garden. Can you talk about the idea of "border crossings," a term you used in your own writing to describe places—perhaps like Longwood—“where we can move between, and connect, the cultural and the natural?”

What Leopold does in A Sand County Almanac is to open your eyes and ears to connect to stories in the landscape—whether it’s a skunk walking through the snow, or rings in a tree—and he does it in a modest setting, on this worn-out farm in Wisconsin. And it’s not just Leopold, but what every good writer does, in a sense, and what every elder does: they open the doors to perceptions. Once those doors are open, you see that every landscape is a story and you’re a part of it.

“Border crossings” are complex interweavings of the cultural and the natural, layered in story. When we understand the story, we understand ourselves. No matter where we live or what our background is, these intersections where worlds come together—whether it’s the Leopold Foundation or Longwood Gardens or the Center for Humans and Nature—are always an adventure, because none of us can know all of that. And they enable us to inhabit our own places in a more enriching way. We put lines on the land that divide us, but we dwell in landscapes that connect us. The challenge is to find the continuity across the lines. Our work as conservationists is to find commonalities and connections for a sustainable future.

In your 1997 essay, “Inherit the Grid,” you wrote: "There is still time to change direction. We can choose to build beauty, diversity, community, and wildness into the grid,” which refers to our man-made environments and “patterns of settlement and land use.” How hopeful are you that we’re moving in the right direction?

Hope is a very complex human response. If I am hopeful, it’s because at least now we know how to think about the problems we face. We have an understanding of history and how it intersects with our current needs in order to create a more resilient future. We have a foundation for action.

What Leopold has taught us is to learn to think in a way that solves problems. And not just to solve problems but to celebrate the positive in the world, not to take it for granted, and to understand connections. The other issues we face are not different from our conservation issues. They’re part of a single larger eco-sociological crisis. I’m a realist in thinking we can make a big difference in our own places and spheres in a more meaningful and effective way than we can for the world as a whole.

Any final thoughts regarding the Community Read and your upcoming visit to Longwood?

I appreciate Longwood Gardens hosting us and showing the film Green Fire. This movie was meant to be a community project, not just a historical documentary. Our goals were to connect to current ideas and places, to make it relevant to younger generations, and to serve as a catalyst for conversations connecting community and place.

Curt Meine will visit Longwood Gardens on April 12 for a lecture and panel discussion about “Conservation in Our Community." We invite you to join us.