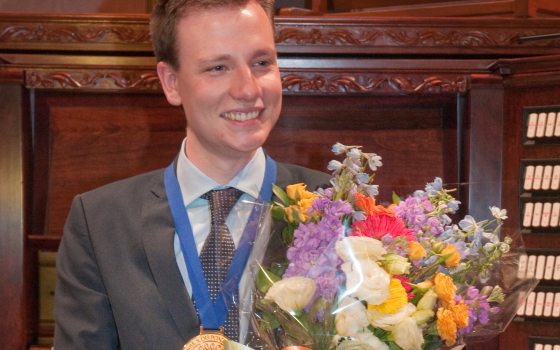 A Chat with Benjamin Sheen: Winner of Our International Organ Competition

Benjamin Sheen almost didn’t enter the Longwood Gardens International Organ Competition. He couldn’t get the Intermezzo from Marcel Dupré's Second Symphony  (one of the set pieces for the preliminary round of the competition), to his liking. “I nearly gave up,” Sheen admits. Good thing he didn’t. The 24-year-old London native ended up winning the 2013 inaugural competition, including the $40,000 Pierre S. du Pont first prize and representation with Phillip Truckenbrod Concert Artists.  Sheen fondly recalls the 10-day competition—and not just because he won. “The competition was unique because the focus wasn’t just on competing,“  Sheen explained.  There were social events, the Gardens to enjoy, and the hospitality was second to none. There was a feeling [among the competitors] that we were in it together. It was not cut throat,” he said. “It was incredibly exciting to be a part of.”

Since winning the competition, Sheen has performed around the U.S., in the UK, Spain, and will tour Singapore, Australia, and Canada later this year.  But one of his favorite concerts was his May 2014 return to Longwood, offering him the chance to play the Longwood Organ again. “I adore it, “Sheen said about the 10,010-pipe instrument. “It is like no other organ,” he said.  Sheen readily admits that the Longwood Organ is still daunting to program and play, even after his hours playing it, but notes the organ is romantic and orchestral and well suited to the kind of music he enjoys playing. In 2016 Sheen plans to head to New Zealand, Malaysia, and Hong Kong for performances and hopes to do some recording as well.  He continues to work on advancing his career and notes that having professional management and the Longwood name behind him has “been terrific."

We all can relive the excitement of the competition with the premiere of Pulling Out All the Stops, a documentary chronicling the 10 finalists as they prepare for, and compete in, the competition. Filmmaker and Producer Eric Shultz traveled the globe to introduce the finalists in their hometowns and then followed each competitor throughout the competition until the winner was announced. The documentary also offers a glimpse into the organ world and the unique place the Longwood Organ holds in it. “Meeting the ten young finalists in the Longwood Gardens International Organ Competition, and then hearing them perform on the Longwood Organ completely changed my perception of what a pipe organ could be. I'd never heard anything like it!  And, to hear music in such a beautiful and historic setting just added to the magnificence,” said Shultz.

What did Sheen think of his documentary debut? “I thought the documentary was extremely well done,” he said after a recent premiere screening at Longwood. “I can’t wait to show it to my family.” Pulling Out All the Stops will air in markets around the country and can be seen locally on WHYY TV on March 22 at 8:00 pm.

Watch the trailer for Pulling out All the Stops.