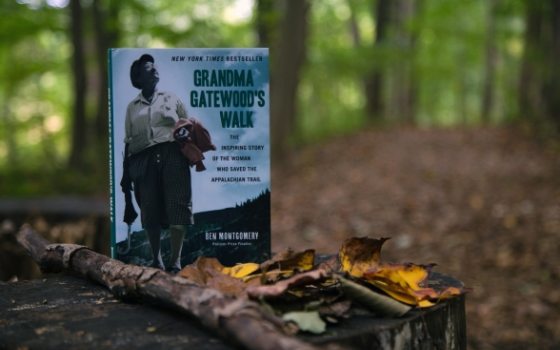 One person. One step. That is how some of the most wondrous journeys—and stories—begin.

The inspirational power of one is the theme of Longwood’s third annual Community Read, an event that moves us to pick up our feet as we journey along with this year's book—Grandma Gatewood’s Walk: The Inspiring Story of the Woman Who Saved the Appalachian Trail—by Pulitzer Prize finalist Ben Montgomery.

On May 3, 1955, Emma Gatewood of Gallia County, Ohio, quietly went for a walk. She started out in canvas Keds and with the sparest of supplies, carried in a homemade drawstring sack. She took one step, then another, along a footpath that stretches 2,050 miles from Mount Oglethorpe in Georgia to Mount Katahdin in Maine. On September 25 of that year, she became the first woman to thru-hike the Appalachian Trail (AT) alone. She was 67 years old.

More than 50 years later, Tampa Bay Times reporter Ben Montgomery wrote a newspaper story about an unsolved Florida lynching that landed on the desk of a literary agent in New York. The agent was hooked, and wondered if the author had any other ideas—for a book, perhaps. “That’s a writer’s dream come true,” Ben said, in a recent email interview with Longwood.

Ben had grown up hearing bedtime stories about Emma from his mother, who was Emma’s great-niece. “My mother never met her, but the folklore stayed in the family. Nobody had done any serious biographical work on Grandma Gatewood, so it seemed like a perfect fit.”

The author soon got to work. “I had a little over a year to do the reporting and writing for the book. Fortunately, Emma's youngest daughter Lucy kept a wealth of material her mother left behind: correspondence, scrapbooks, journals. And she lived a few hours away from me in Florida! She gave me access to all that material.

“I also traveled to Ohio, Arizona, and Arkansas to interview surviving children. I didn’t have time to hike the entire AT, so I dropped in on spots that were important to Emma. I think the most memorable experience for me was sitting on these Maryland bluffs overlooking Harper’s Ferry, WV, and reading Emma’s journal entry, written on the same bluffs. It felt like she was sitting beside me.”

That feeling of walking right by Emma’s side is a bit of trail magic that author Montgomery conjures up through prose that is smooth and spare. But just as Emma sometimes departs from the trail in search of shelter, to rest and rebuild her strength, Ben guides us on his own side trails that build the strength of his narrative. He treats us to the history of the Appalachian Trail, the folk heroes who hiked it, and the lands it traverses.

“My wife and I climbed Maine’s Mount Katahdin with a guide and modern gear. Past the timber line, it’s a barren, desolate place. Thoreau called it primeval, forever untamable, savage and awful, and he’s right. I remember trying to put myself in Emma’s shoes when she climbed the mountain alone for the first time in 1955, wearing tennis shoes and clothes she had found along the trail. One lens in her glasses was broken, she had a bum knee and it was sleeting and windy. I was having a hard time climbing and conditions were much better. I remember stopping at one point and being struck by this incredible sense of wonderment at how this woman was able to do what she did. I still carry that feeling.”

Ben’s literary travels along the trail offer time for deep reflection, and a chance to get to the heart of Emma’s story: Why did she do it? The question both shadowed and powered her every footstep, but she never fully or deeply answered it. “Because it was there, she'd say. Seemed like a good lark, she'd say."

The author fills Emma’s polite silence by sharing her backstory—the details of her abusive marriage, the raising of 11 children, and the hard farm work that was her “only” preparation for a trail “where there were a million heavenly things to see and a million spectacular ways to die.”

Ben searched for the answer to the question in Emma’s journals, in interviews with her children, and by walking in her footsteps. But “she was emotionally elusive,” he says, “even in her personal writings.”

And so the question is answered, not by a phrase or a sentence or a paragraph, but by the totality of Emma's life and by the whole of the author's work.

Emma's elusive motive is both the secret and the gift of this book. Through his research and writing, the author offers clues. Through our reading, we each uncover a part of the secret, interpreted within the context of our own lives. Through the power of our Community Read, we share those insights and take one step closer to truth—or to trail magic.

Ben Montgomery describes the trail magic this book has brought him:

“It delights me when I hear from readers who have been moved by Emma’s story to get off the couch and strike out on their own two feet. That’s such a reward for me, better than any royalty check that might come in the mail.”

That’s the inspirational power of one.

It is an idea well-known at Longwood, a public garden seeded by the vision of one man—our founder, Pierre S. du Pont. That vision is now carried forth by the daily steps of dedicated staff, volunteers, students, and guests. Until the power of one person’s vision becomes a garden where many of us can grow and thrive.

Until one step becomes five million, and the power of one person’s story becomes the power of a Community Read.

Don't miss author Ben Montgomery when he brings the power of Grandma Gatewood’s Walk to Longwood Gardens for a Community Conversation on April 23, and for Small Group Discussions on April 23 and April 24. And please join our partner organizations for one—or many—of our Community Events.