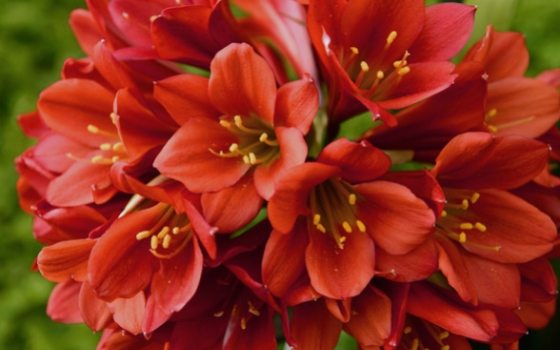 We are pleased to announce the release of Clivia miniata ‘Longwood Chimes’. This is the fourth named clivia introduction from our breeding program, which was started by Dr. Robert Armstrong in 1976. The flowers of ‘Longwood Chimes’ are a complex blend of bronze and burnt oranges with dark red overtones and a green throat. The red flush of the flowers, framed by leaves of dark olive green, deepens to dark red as the flowers age. ‘Longwood Chimes’ catches the eye of the clivia connoisseur and the novice alike.

When Longwood Gardens began breeding clivia in 1976, most of the available plants were orange-flowered varieties. While yellow flowers were rare and very desirable, the yellow flowers that did exist were not of the highest quality. Thus the original goal of the breeding program was to produce a superior yellow-flowering plant, which was a long process due to the slow growth of clivia from seed. The first yellow-flowered introduction was released in 2011, 35 years after the program began. Appropriately named Clivia miniata ‘Longwood Debutante’, its flowers are a beautiful buttery yellow with overlapping petals.

In 2012 the second release from the program was also a yellow-flowered plant, Clivia miniata ‘Longwood Fireworks’, so named because its flowers are presented on a round umbel with stamens that appear to shoot out of the flowers like fireworks.

Although yellow is now a common color in the clivia world, other seedlings emerged from our breeding program that are unique enough to be given their own names. In 2014 we released Clivia miniata ‘Longwood Sunrise’, which displays beautiful orange petals with raised centers, or keels. The keel changes the shape and appearance of the flowers and gives them more depth and texture. Keeling clivia flowers are rare and occurred randomly in Longwood’s seedlings, but our breeding efforts resulted in beautiful, consistently keeling flowers. Future clivia releases will include unique yellow and orange keeling varieties.

Now that orange and yellow clivia flowers are common, collectors crave other new and exciting colors. Red flowers, such as those of Clivia miniata ‘Longwood Chimes’, are rare and highly desired. An incredible green-flowered seedling with large flowers was created through the Longwood program, and may be a game changer. Most greens available in the trade today have come from the same breeding lines that contain the green-flowered Clivia miniata ‘Hirao’. Longwood’s green is from a new genetic line, and is a much larger plant than ‘Hirao’. We hope that within the next decade, there will be enough of the green-flowered Longwood plant to allow its naming and release.

After seeing the beautiful flowers of clivia, you may just want one of these beautiful plants for yourself. If you are inspired to grow clivia, don’t be discouraged by high prices—not all clivia are as rare as the plants from Longwood's breeding program. Seedlings and small plants are reasonably priced through reputable sources on the Internet. Fresh clivia seeds germinate easily, and mature clivia are easy to care for and make great houseplants that need little water. They would be a welcome addition to your houseplant collection.

All of Longwood’s past clivia releases, seedlings that are currently in the trialing process, and amazing plants from enthusiasts in the clivia community will be on display at the North American Clivia Show at Longwood on March 12–13, 2016. Be sure to visit and catch a glimpse of the beautiful Clivia miniata ‘Longwood Chimes’ for yourself. She will be on display in the Exhibition Hall during the show!

This year Longwood Gardens will be offering a single plant of Clivia miniata ‘Longwood Chimes’ for auction on eBay. Bids will be accepted March 11–21, 2016. Because of the rarity and uniqueness of this plant, bidding will start at $800. Learn more about the auction.