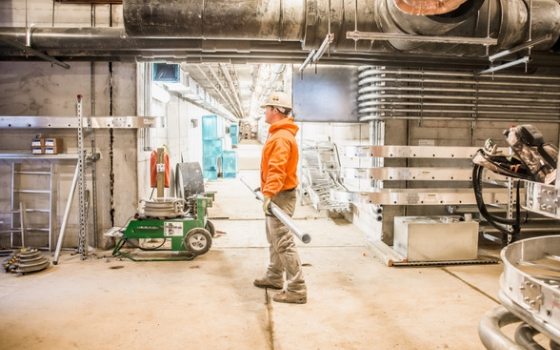 What Lies Beneath: A Deeper Look into an Engineering Marvel

Built in 1931 by Pierre S. du Pont, the Main Fountain Garden was inspired by Pierre’s passion for engineering and design, and his travels to European gardens.

After years of deteriorating stonework, many fountain features were turned off—leading to limited access to the Garden since the early ‘90s. In order to save this treasure, we embarked on a major restoration project. This spring will mark the halfway point of the two-year revitalization.

In this post, we will go below the surface of the Main Fountain Garden and explore some of the engineering behind the beauty. Remarkably, half of the entire revitalization is underground. A two-story pump house was built to handle all the fountain systems, with underground access tunnels for ease of maintenance and accessibility to the equipment.

The design team behind the revitalization was challenged to develop state-of-the-art technology and infrastructure while honoring the legacy of the original design.

Every aspect of this project was carefully considered by our design team, keeping in mind the stewardship of this historic Garden. Key components of the restoration include the management of storm water, the controlling of water consumption, and the use of geothermal energy.

Detention basins are simply areas where excess storm water is stored temporarily and then slowly drained as water levels in the receiving channel recede. These detention basins would hinder the overall design, and compromise the guest experience. So, the designers decided to take a different approach—make the soil in the Main Fountain Garden the detention basin.

Working with West 8 and a soil scientist, the team engineered a soil that would act as the detention basin. The engineered soil is a composite of various types of stone, soils, and sand that are sturdy yet porous enough to allow water to funnel through. This soil was engineered to hold storm water for a 100-Year Storm, meaning that the soil is able to handle drainage from a storm so severe that it only has a 1% chance of occurring in any year. This soil will be strong enough to withstand compaction from foot traffic and will be able to support the health of the plantings and horticultural displays.

The backbone of the Main Fountain Garden project is the 1,400 linear feet of underground tunnels housing all the plumbing and electrical infrastructure. With these tunnels came the challenge of figuring out a way to heat and cool the underground infrastructure. To do so, geothermal wells were installed.

The wells work as a natural cooling system that uses the Earth’s constant temperature. Thirty wells were drilled approximately 450 feet into the ground, with four pipes each for a combined total of 54,000 feet of pipeline. The geothermal heat pump system extracts the heat from the surroundings and when pumped into the underground pipeline, naturally dissipates out to the Earth.

Like most 19th- and 20th-century European fountain gardens, the Main Fountain Garden partially used gravity to supply the water source, with the help of water pumps.

Originally, these water pumps were pumping at 100% all the time. To control the flow of the water, water valves were used to create different effects. Today, we are using Variable Frequency Drives, which control the speed of the water. Using multiple, smaller pumps and motors allows for a more controlled, efficient use of water.

338,570 gallons of water will be held in three separate underground reservoirs. These reservoirs help to control the temperature and allow for longer operation throughout the season.

Light is an integral part of the fountain shows. The Main Fountain Garden will now utilize LED lights that use less energy. These LED lights produce multiple, intricate colors and each individual light can be controlled. With the lighting more controlled and coordinated, combined with the use of LED lighting, energy is reduced tremendously.

From more flexible fountain systems, to storm water management, the newly revitalized Main Fountain Garden is a story of our commitment to being good stewards of this beautiful and historic landscape. Be sure to check back for updates on the project with our online exhibit at newheights.longwoodgardens.org.