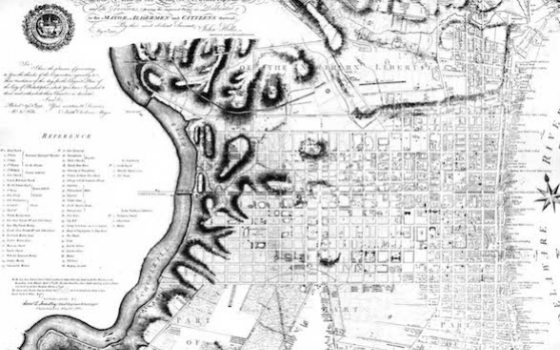 On July 27, the inaugural cohort of Longwood Fellows traveled to Drexel University in Philadelphia, Pennsylvania, for the first in a series of Leadership Salons that will expose the Fellows to thought leaders in public horticulture and beyond and to the challenging topics they face in the nonprofit sector. This first salon, led by Danielle Rice, Ph.D., Director of Museum Leadership at Drexel University’s Antoinette Westphal College of Media Arts and Design, focused on the history of urban public spaces—an appropriate place to begin.

The educational experience included a journey from ancient Rome to great European cities such as Paris and London, and then across to the Americas with the founding of Philadelphia. The evolution of urban planning to involve parks, gardens, and intentional greenspaces was discussed in the context of specific moments in history. William Penn’s conceptual plans for Philadelphia, for example, resulted from his surviving the Great Fire of London in 1666 and seeing the transformation of a city that became infused with greenspaces as its leaders rebuilt in the aftermath. As the new city of Philadelphia further developed, its citizens continued looking to Europe for inspiration and ideas. Subsequent urban planners incorporated the concept of “parkways”—broad avenues lined with greenspaces modeled after post-Napoleonic Paris. These architectural features of the landscape, while tranquil and beautiful, also created strategic routes for moving armies and suppressing rebellions in increasingly populated cities.

After this insightful journey to the distant past, Danielle zoomed in on more recent times with a conversation based on her article, The ‘Rocky’ Dilemma,* about the evolution of museums and monuments in a postmodern era of popular culture. The primary dilemma discussed in the article was what to do with a sculpture of Rocky Balboa, the fictional boxer played by Sylvester Stallone in the film series that began in 1976. The sculpture and the character it depicted, although highly popularized by Hollywood, was ultimately not placed atop the stairs of the Philadelphia Museum of Art as requested by Mr. Stallone and his ardent fans.

The Fellows challenged themselves and their facilitator by debating how governments and cultural institutions can and should engage their communities in this present time. We discussed how to provide a voice to the public we serve, and how professionals in public institutions can facilitate the public engagement necessary to remain relevant and emerge as leaders in a constantly changing world.

The series continues when the Fellows travel to Bartram’s Garden on September 14, 2017, for a discussion of “Public Gardens in a Challenging Landscape.” With no shortage of challenges in our world, the next generation of leaders in public horticulture must be prepared with sound strategies and potential solutions to explore with their communities.