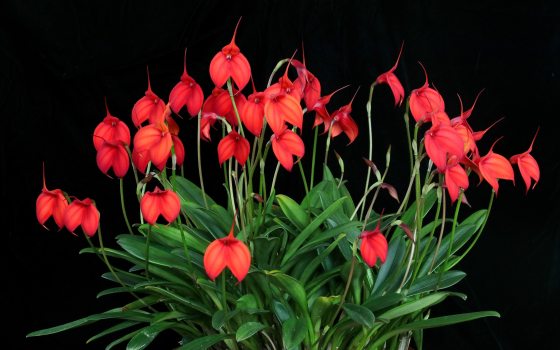 Recently, we were able to bring some orchids from the Longwood collection to the Mid-Atlantic American Orchid Society (AOS) Judging Center. We were thrilled to receive 10 awards on eight plants, and among them are some rather important awards! 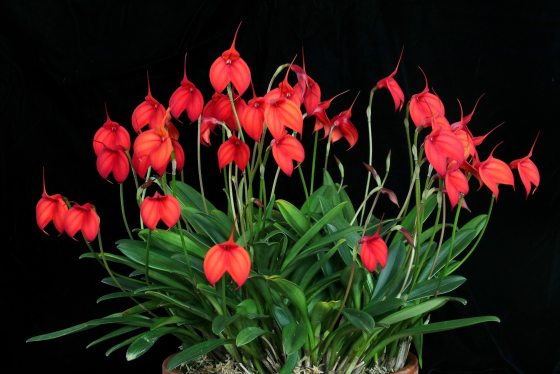 This plant was originally an unnamed seedling from J&L Orchids, which was purchased by my mentors, John Salventi and Tom Purviance. In 2015 they gifted it to Longwood. Masdevallia is one of my favorite genera, and while I was working at Parkside Orchid Nursery, I did a great deal of research and experimentation to learn how to cultivate them well.

The clonal name of this plant, ‘HOF’, stands for Hilo Orchid Farm, the wholesale orchid nursery at which I previously worked, and was so named to honor them for their incredible role in the orchid world. A clonal name is a specific epithet given to one specific genetic individual in order to identify it as different from any others of the same hybrid or species.

Tom and John grew this plant in a basket in bark (very well!), but my preference and conditions lead me to grow them in sphagnum moss in a clay pot.

Masdevallia come primarily from the Andes Mountains and grow in high elevations in the cloud forests. This means that they generally prefer temperatures between 50–75° Fahrenheit. Because we have an air-conditioned greenhouse here at Longwood, I am able to keep the Masdevallia in an ideal temperature range, usually between 48–68° Fahrenheit. I first potted Masdevallia Gypsy ‘HOF’ into a 5-inch azalea pot, then into an 8-inch bulb pan, then into a 10-inch bulb pan, and finally last year into the 14-inch bulb pan it lives in today. It flowers multiple times a year, but its best flowering is usually in the late spring—or this year, because of our unusual weather, early summer.

The awards it received are the highest possible in both of their categories. An FCC is a First Class Certificate, which is awarded to plants whose flower quality is considered to be of the highest echelon. To receive an FCC, a plant must score 90 or more out of 100 points. Masdevallia Gypsy ‘HOF’ received a 91-point FCC. FCCs are notoriously difficult to achieve, and only a very small percentage of plants are considered worthy. This plant also received a CCE, or a Certificate of Cultural Excellence, which acknowledges that a plant has been grown to the highest standards. Masdevallia Gypsy ‘HOF’ received a 93-point CCE. What is even more exciting is that this plant received both awards together. This is a fairly uncommon phenomenon, which certainly draws attention to the quality of this plant. 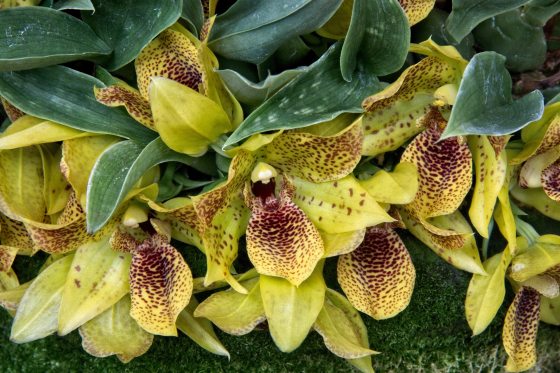 This plant is a primary cross of Promenaea stapelioides × Promenaea xanthina, and the cross was first made and registered around the year 1905. Our plant is certainly not as old and is rather the offspring of a more recent remake. The fact that this primary hybrid has been remade and is well-known over time is evidence of its tendency to produce offspring of high quality. Our plant came to us from Mrs. Pamela Copeland and the Mt. Cuba Center and was given to us in 2001. It came without a clonal name.

Promenaea are interesting little epiphytes that are native primarily to Brazil and the surrounding countries. They have pendant inflorescences, which can make the flowers difficult to display well. In order to show off the flowers, I potted the plant on a mound of sphagnum moss so that it would essentially form the shape of a mountain. Because Promenaea grow relatively fast and their rhizomes branch freely when they’re well established, they fill in very nicely, creating full, bushy plants. Our Promenaea Crawshayana is growing in a clay bulb pan to ensure it dries enough between waterings.

This clone, ‘Longwood’s Gilded Globe’, received both a flower quality award and a cultural award. It received an 80-point Award of Merit (AM), which designates that it has an above average flower compared to other Promenaea Crawshayana. It also received a CCE of 92 points, signifying the quality with which the plant was grown.

The Pleurothallid Alliance includes a handful of genera that are all related. Among these are Masdevallia, Dracula, and Pleurothallis. Pleurothallis are known for their heart-shaped leaves that flower from the center, with small flowers that are usually intricate and crystalline. They will flower multiple times from the same growth, and, as in the case of Pleurothallis viduata, with multiple flowers from the same growth at one time. Pleurothallis grow primarily in the cloud forests of the Andes Mountains, and when they are grown in ideal conditions, can become quite impressive plants. Ours is grown in sphagnum moss in an 8-inch terra cotta azalea pot.

Our plant received a 93-point CCE for its size and floriferousness. The award description reads, “flower count well in excess of any known flowering of this species.”

Platystele is a genus that is also in the Pleurothallid Alliance and is known for its minute, typically star-shaped flowers. These plants grow in cool cloud forests, proliferate rapidly, and flower profusely. This species, Platystele misera, produces long inflorescences that flower sequentially, holding a few flowers open at a time, but flowering for weeks on end. Although a magnifying glass would be helpful to view the individual flowers, the impact of a well-flowered plant, despite the flower size, is impressive.

Our plant is growing in sphagnum moss in a 4-inch terra cotta azalea pot. At the time of the award it had 60 inflorescences with more than 700 flowers and buds. It received a Certificate of Cultural Merit (CCM) of 86 points.

Where are the flowers? It might be hard to see the flowers of Masdevallia calura, especially on a plant as big as ours, because the inflorescences don’t emerge from the leaves, but rather are kept down inside them. That being said, when you look closely it is quite exciting to see the crimson flowers appear from the shadows of the leaves. Our plant is growing in a 12-inch terra cotta azalea pot in sphagnum moss. It received a CCM of 85 points.

Disa are a unique genus of terrestrial orchids from Africa, with Disa uniflora native to Table Mountain (near Cape Town, South Africa) and usually found growing along stream banks. It is deciduous and dies back to only a corm each year. The flowers are vibrant red and triangular in shape. We have been cultivating Disa at Longwood for more than 50 years, and we breed our own plants. This plant represents seed from my first year at Longwood, and it was noted for the exceptional color of its dorsal sepal. We set anywhere from 10 to 20 seedpods each year, seeing the seedlings flower for the first time two to three years later. This flower represents some of the best of our breeding but is only the tip of the iceberg as we continue to develop and refine our breeding lines.

Disa uniflora ‘Longwood’s Decisive Dynamo’ received a Judges’ Commendation (JC). This award is given to a flower that is not quite good enough in every regard for a regular quality award, but which has one specific feature that is exemplary for the type. Our plant was given a JC for the quality of its dorsal sepal, which is well shaped, of decent size, has a rich cerise color, and is darkly veined. Stay tuned as we continue to flower more Disa over the years and as the offspring of this plant begins to flower three years from now!

Dactylorhiza is a genus of European terrestrial orchids that go dormant in the winter and flower in the spring and summer. They are a fascinating genus, and many are hardy in our zone in Pennsylvania. This plant is grown in our air-conditioned greenhouse in the summer and then placed in a seed cooler at 34° Fahrenheit for the winter.

A CBR is a Certificate of Botanical Recognition, which essentially designates a plant when it is an interesting or unusual species that is brought to judging for the first time. It communicates that this is an uncommon plant of botanical interest. For us at Longwood, it is only a small part of the interesting and unusual plants we are requisitioning for the collection. With the help of Dr. Peter Zale, our Associate Director of Conservation, Plant Breeding and Collections, we have been adding a number of interesting terrestrials and tropicals from around the world. Last year we flowered a number of other semi-hardy European terrestrials during our Orchid Extravaganza, such as Ophrys (the bee orchid). We will continue to seek to expand our collection with new and unusual plants from across the globe.

This plant, previously known as Ascocentrum micranthum, belongs to the group of orchids related to Vanda. This, however, is a far cry from the bright, bold colors that typify the genus Vanda, but is every bit as beautiful. Schoenorchis is a genus of small plants with small flowers that are always very beautiful, crystalline, and often pink, purple, or white.

Our plant is growing in a basket and was awarded with 32 inflorescences, with approximately 320 flowers and 800 buds! These inflorescences flower sequentially, which means only about 10 flowers are open at once, but the inflorescence continues to open new flowers over time as the old flowers fade. The highest previous award had 21 inflorescences. Our plant was given a CCM of 84 points.

So, what do all these awards mean? The orchid collection at Longwood is on track to become one of the most exemplary orchid collections in the world to thrill and delight our guests. While there are still many improvements to be made, and we are changing and growing every day toward our goal, these awards are the fruition of what has already been three and a half years of hard work. We in the Orchid Team are excited about what the future holds and what we can accomplish. We can’t wait to show our guests all of the amazing diversity and beauty in the world of orchids and the plants we have been growing here at Longwood!