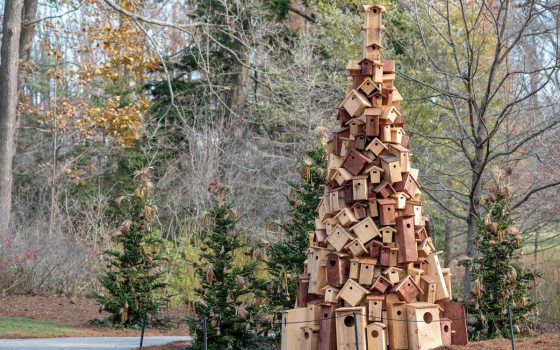 Under the direction of Senior Horticulturist Pandora Young, staff and volunteers annually create the Wildlife Tree, an outdoor feature that calls attention to the birds and small mammals that live in the Gardens. This year, the Wildlife Tree has been dramatically redesigned as a spectacular 15-foot “tree” made of more than 200 illuminated birdhouses, located at the east end of Flower Garden Drive. Surrounding the tree are four smaller Fraser firs ornamented in suet and seeds to feed the wildlife.

The birdhouse tree is the brainchild of Young and Jim Sutton, Longwood’s Associate Director, Display Design. Together they developed the concept, repurposing as many existing materials as possible. The tree’s heavy steel frame was used previously for a Christmas tree in the Silver Garden, and about two-thirds of the redwood, cypress, and white pine wood used to build the birdhouses came from fallen redwood and cypress trees on the Longwood property.

Young selected eight birdhouse designs for the reimagined tree. “I wanted a variety of sizes for the largest to the smallest birds, and a variety of shapes that would be practical as well as decorative,” says Young. Young chose birdhouse patterns to shelter barred owls, northern flickers, wood ducks, house finches, wrens, bluebirds, chickadees, and other small birds that populate the area. Some patterns included such special features as a rectangular entrance hole in the wren house to allow the birds to more easily bring sticks inside for their nests. Longwood’s carpenters cut the wood into the pattern pieces and helped assemble kits that included wood, nails, and glue.

A team of about 20 Longwood volunteers used the kits to build the birdhouses this past summer and fall. The team included some experienced woodworkers and others doing this work for the first time. Volunteer Nancy Hiss describes the process she and her husband Roger followed when working on the birdhouses: “We had complementary skills. I can handle a hammer and glue bottle; Roger does power tools. I am good at figuring out construction and Roger is a perfectionist in the building details. I chose to make the cute wren houses, while Roger brought home the huge owl houses! We had a finished house as an example, but we had to figure out how everything went together. In the end we had quite an assembly line going.”

Woodworking was entirely new to volunteer Reena Hanspal, who found the project challenging but enjoyable. “I liked scoring the inner front panel beneath the entrance hole for the young bird to climb to make its first attempt at flying into the outside world.” Hanspal was assisted by her husband, Navjot Hanspal, who likened making the birdhouses from raw materials to “cooking from scratch—and equally satisfying.”

Young installed the birdhouse tree with help from Horticulturist Assistant Maureen Carlin over three long days, while Horticulturist Assistant Melanie Ciliberto led the decorating of the surrounding Fraser firs. Volunteers made and decorated the smaller trees with edible ornaments, which are replenished frequently over the course of the Christmas display. After the display comes to an end, some of the birdhouses may remain at Longwood for use in our natural areas, while others will be given to area schools and natural land organizations to provide homes for wildlife for years to come.

Volunteer Kris Kreuger, who together with her husband built 12 birdhouses, sums up the feelings of many involved in this project. “I volunteered because it was something significant that we could do to contribute to A Longwood Christmas—and for the enjoyment of wildlife in our environment. It was so much fun taking our grandchildren to see the finished display and pointing out ‘our’ birdhouses on the tree!”