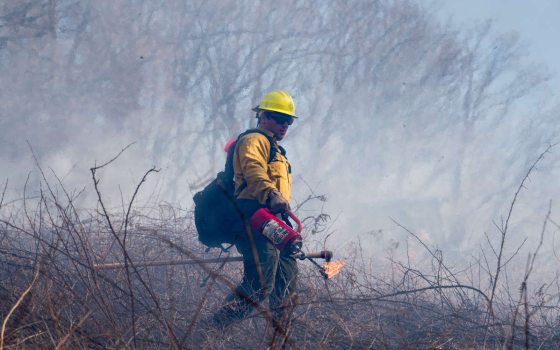 From our roles as part of the Longwood Natural Lands Team and prescribed fire crew, to our work fighting wildfires across the country through the Pennsylvania Bureau of Forestry Wildland Fire and Delaware Wildland Fire Program—including a deployment to the Idaho Panhandle National Forests this past summer—we are thrilled to be part of (and often on the front lines of) the evolving field of fire ecology. The field is a hot topic gaining traction at Longwood and beyond, and one that helps us steward the land we love.

Rooted in science and research, fire ecology is based on the recognition that wildfire often operates as an essential part of the ecosystem in which it occurs, and sometimes holds a beneficial relationship with its surrounding environment. Here at Longwood, with Senior Land Stewardship Technician Erik Stefferud and Natural Lands Stewardship Intern Kevin Popowich, our Natural Lands Team uses approved land stewardship strategies based on an understanding of ecosystems and adaptive land management strategies, including invasive plant management; native species plantings; forest, meadow, wetland, and wildlife management and restoration; and mowing and prescribed burning.

Our annual prescribed burn in Longwood’s Meadow Garden, which takes place each spring, is a way to maintain the meadow’s health by rejuvenating its native plant communities and suppressing unwanted woody vegetation that would otherwise quickly overrun it. Keeping the fire under control and managing the safety of people and nearby roads and buildings during a prescribed meadow burn is a challenging operation. The weather conditions have to be just right and the potential characteristics of the fire’s behavior are carefully monitored the entire time. Each staff member involved in controlling the burn is trained in wildland firefighting and wildland fire behavior, having received extensive training in multiple disciplines as well as completing a yearly physical fitness exam. While most of these trainings are tailored toward wildland firefighting, the concepts and tactics used for controlling a wildfire and keeping a prescribed fire within its boundaries are almost identical.

As wildland firefighters, we look at wildfire as an ecologically based, natural process in the ecosystem, but one that must be expertly managed through effective analysis, decision-making, and proper training. While wildfire is a natural process, it is also an uncontrolled fire in an area of combustible vegetation. To become wildland firefighters, we underwent extensive classroom and hands-on training to understand fire behavior and fire effects, and ultimately know how to effectively protect national lands from wildfire damage. As part of those efforts, we have been mobilized for deployment to aid with wildfire suppression throughout the country, including our deployment last summer to the Idaho Panhandle National Forests. We were called to help protect these wildlife-rich lands, comprised of 2.5 million acres of public lands that extend into eastern Washington and western Montana, from a wildfire that was believed to have ignited as a result of lightning.

Our trip to Idaho was the first western US deployment for Kevin and third for Erik (in addition to about a dozen in-state deployments for Erik over the last four years). We went as a part of state crews, each comprised of 20 trained state and local volunteer wildland firefighters under the leadership of a crew boss and three squad bosses. Each crew lives and works together throughout the assignment, which typically lasts 14 to 16 days, accomplishing work on the fire-line as a cohesive unit.

We were given a two-day notice to ready ourselves for the Idaho deployment, and in that time we prepared our personal protection equipment and gear for the trip, following strict weight requirements for the flight there. A firefighter averages 205 pounds and each is allotted 45 pounds’ worth of gear for a two-week deployment. Gear that is brought by each firefighter during the deployment is comprised of mandated personal protection equipment, including flame resistant clothing, leather boots, a hardhat, leather gloves, eye protection, and a fire shelter, as well as our own tent and sleeping bag.

Some luxuries like a tent, sleeping bag, and toiletries can be left at camp each day but in order to be self-sufficient for a 16-hour shift in the field we must carry our own food, first aid items, etc.—not to mention more than two gallons of water each day to stay hydrated in the exceedingly dry conditions of less than 10 percent humidity. We must also carry our own hand tools. As a sawyer, or a firefighter who uses a chainsaw to cut brush, woody material, and hazard trees away from the fire’s edge, Erik also carries his chainsaw, associated tools, and fuel/bar oil. It’s a physically demanding process. Our work on the fire-line can include installing water lines and sprinkler systems to bolster fire breaks and to protect surrounding homes and buildings, as well as using our hand tools to construct firebreaks, or gaps in vegetation that act as barriers to slow or stop the progress of a wildfire. Constructing these firebreaks includes clearing the area of burnable vegetation, cutting climbing vegetation from trees in its path so fire cannot spread up through the trees, and digging to a depth of clean soil free of biomass. During our Idaho deployment, we worked on containing two wildfires, the Copper Mountain Fire and the Cougar Fire, reinforcing the fire-lines off of roads so when the wildfire did reach a road, it would fizzle out.

In reality, fighting wildland fire is much more a mental challenge than a physical one. We must think rationally and stay calm in demanding conditions. Lands and lives depend on it. It’s a fast-paced and grueling yet rewarding process that we take a lot of pride in being a part of. It’s also a fantastic way to experience remote parts of the country that not many people have had the chance to see. It’s an adventure and a way to give back.

For Kevin, his first western deployment was one of challenges and one of absolute inspiration and education—one that only deepened his appreciation and understanding of forest fire ecology as a whole.

For Erik, it was a continuation of work that is nothing short of morally enlightening, and work that he has grown up with, between his father and grandfather both working in natural lands fields. In fact, Erik uses his grandfather’s sleeping bag from his time in the Forest Service while on deployments.

Our work fighting wildland fires and managing prescribed burns ultimately helps grow the field of fire ecology. It also helps Longwood grow as an organization and share our intellectual capital more widely. In turn, we help develop the next generation of land stewards and fire practitioners, as well as use science to protect our natural lands for generations to come.